Of Ranchers and Rustlers:
How I Evangelize Those Who Doubt or Deny the Existence of God, Part XIII 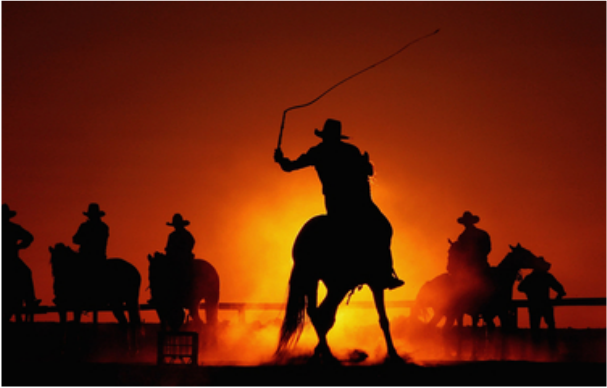 The ancient man approached God (or even the gods) as the accused person approaches his judge. For the modern man the roles are reversed. He is the judge; God is in the dock … The trial may even end in God’s acquittal. But the important thing is that Man is on the bench and God is in the dock (C.S. Lewis, God in the Dock)

The complaint that C.S. Lewis makes here is the complaint I have with the way in which most discussions about God’s existence take place between believers and unbelievers.

I’m talking about the assumption made by the atheist — and accepted by the believer as perfectly reasonable! — that God is in the dock and ought to be in the dock. That the atheist stands in relation to God as prosecuting attorney and judge. That it’s the unbeliever’s prerogative to ask the “hard questions” and the believer’s unhappy task to scramble about forever on the defensive.

“I have nothing to defend,” the atheist will commonly explain. “I merely lack belief in a god. You’re the one making the positive assertion of God’s existence and therefore the burden of proof lies entirely with you.” And there’s truth in this.

It’s true that in the courtroom, as in debate, the burden of proof lies with the one making the positive assertion:

“Colonel Mustard did it, in the billiard room and with the lead pipe!”

The Christian apologist must, therefore, be “prepared to make a defense to anyone who calls you to account for the hope that is in you” (1 Peter 3:15). Apologetics must include positive arguments for the existence of God and the truth of the Christian worldview.

What is not true is that the atheist is making no positive assertion about the nature of reality and therefore bears no burden in the conversation. At least in modern western societies, when an atheist says he “merely lacks belief in a god,” in nearly every case, what he is asserting positively is some form of scientific materialism.

In nearly every case he is asserting that the world in which we live is a world comprised entirely of brute physical particles interacting with one another according to strict physical laws.

In other words, the situation is not one in which we Christians are presenting a particular worldview that we must defend and the atheist is presenting nothing, has nothing to defend, and therefore enjoys the luxury of presiding as judge over the entire affair from his supposed seat of scientific neutrality.

No. He has a worldview to defend as much as we do.

With this in mind, evangelism with those who doubt or deny the existence of God includes for me both a positive side (presenting arguments for God’s existence and the truth of Christianity) and a negative side (critiquing the materialist worldview).

For the positive side, think of the arguments of Thomas Aquinas, C.S. Lewis, and others. For the negative side, my aim is to enter the materialist worldview, draw out the implications of that worldview and challenge my atheist friend to make sense of his experience as a human being in terms of what he says is true of the world in which we live.

I want my atheist friend to come to see that as a materialist he actually has a great deal to explain and defend.

For what can be known about God is plain to them, because God has shown it to them. Ever since the creation of the world his invisible nature, namely, his eternal power and deity, has been clearly perceived in the things that have been made. So they are without excuse (Romans 1:19-20).

In Parts I and II of this series, I focused on a truth foundational to evangelism and apologetics. It’s a truth revealed to us in Scripture — that no one can really escape the knowledge of God.

After all, every person is created in the image and likeness of God (Genesis 1:26) and lives in a world that cries out the existence of the one who made it (Psalm 19:1-4).

The revelation of God from without and within is inescapable. It is etched within the heart of every person.

With this in mind, when I talk with someone who says he doesn’t believe in God, I know that I’m talking with someone who knows an awful lot that he would never be able to account for as an atheist.

For instance, my atheist friend knows that human beings possess unique worth and dignity among all God’s creatures. He knows this. And yet, according to his materialist worldview, human beings have no more objective “value” than a rat or a cockroach. According to his materialist worldview, we are nothing more than biochemical machines whose very existence can be chalked up to chance (see Part III).

He knows that there is a moral law, that “right” and “wrong” are not mere words we use to describe what we approve and disapprove, but reflect something true about our world. He knows this and gives evidence continually that he knows this, while insisting that our universe is one in which nothing exists but material substances ruled by chemical and material laws (see Parts IV and V).

He knows that human beings possess intrinsic rights, rights that are inherent to them as human beings, rights that cannot be alienated from them. He may have even devoted his life to the fight for human rights — while holding to a worldview that cannot account for “intrinsic rights.” In a materialist universe “rights” are something we simply decide to offer others — or not (see Part VI).

He knows that life has ultimate meaning and purpose — while believing that our entire universe, himself included, is an accident (see Part VII).

He knows that consciousness is not entirely reducible to electrochemical processes in the brain, that he is “someone,” that his sense of personal identity is more than some illusion being played on him by neurons firing in his skull. And yet this is precisely what his materialist worldview insists to be the case (see Parts VIII and XI).

He knows that he possesses freedom to make choices and is morally accountable for the choices he makes — while holding a worldview that is entirely mechanical and deterministic and provides no basis whatsoever for belief in human freedom or moral accountability (see Part IX).

He knows that knowledge is possible. He reasons about the non-existence of God and writes books to argue his case. And yet how, on the basis of his materialist worldview, can he even account for the existence of abstract, universal, and unchanging laws of thought — when he has already said that nothing exists but material substances, which are concrete, particular and ever-changing (see Parts X and XII)?

Being a mirror of God’s very being, the atheist knows these things! He knows them intuitively. Moral law, freedom of will, a belief in inherent human rights and the possibility of knowledge — these are among the most fundamental aspects of his experience as a human being. He cannot help living in terms of them.

And yet he cannot account for any of them on the basis of what he says is true of the universe in which we live.

Because of this, when I discuss these matters with an atheist, I know that I’m dealing with someone who lives in tension and that the tension is irresolvable.

He’s like a man who denies the existence of gravity while having no choice but to live in the real world, where every step he takes literally proves him wrong. Indeed, the fact that he doesn’t chain himself to the floor while delivering his speeches on the non-existence of gravity, or glue his notes to the podium, gives evidence that he knows the truth.

Likewise, what the atheist says is true of the world conflicts at every level with what he knows to be true by virtue of who he is as God’s image and likeness. And the fact that he lives as though right and wrong were real, as though human beings were more than biochemistry, as though freedom and accountability are to be taken for granted  —all this gives evidence that he knows the truth.

Of Ranchers and Rustlers

In a similar way, I look at my atheist friend, and I see that he possesses a great deal of what I possess, as one who believes in God and in our creation in God’s image and likeness. He believes in moral absolutes. He’s committed to the equal worth and dignity of every person. He believes in the inalienable right to life, liberty and the pursuit of happiness. He’s got meaning and purpose. He believes in freedom and moral accountability.

He’s got the very same cattle in his corral that I’ve got in mine! And he lives each day as though all of this naturally belonged to him.

But for the life of him, he cannot account for how he came to possess these cattle on the basis of what he says is true about the universe in which he lives. If his materialist worldview were really true, his corrals would be quite empty.

So how did he come to possess this beautiful herd of cattle? In short, he has borrowed them from a worldview that can account for them and make sense of them.

In short, he is living on borrowed capital.

This is not something my atheist friend has done consciously or with evil intent. It’s something natural and inescapable. Because even though he has come to deny the existence of God, he’s still the image and likeness of God. He still has the revelation of God’s nature — and therefore the nature of man as well — etched into his bones. He really can’t avoid possessing these “cattle” even if he can’t explain, in terms of his worldview, how he came to possess them.

They are natural to him — but not to his worldview.

Because of this, when I ask my atheist friend to account for his cattle, I do it with gentleness and respect. When I ask my cattle-rustling friend to “show me the receipts,” I do it as a friend reminding a friend of something he has always known and has forgotten.