The Ax Murderer and the Crocodile:
How I Evangelize Those Who Doubt or Deny the Existence of God, Part V 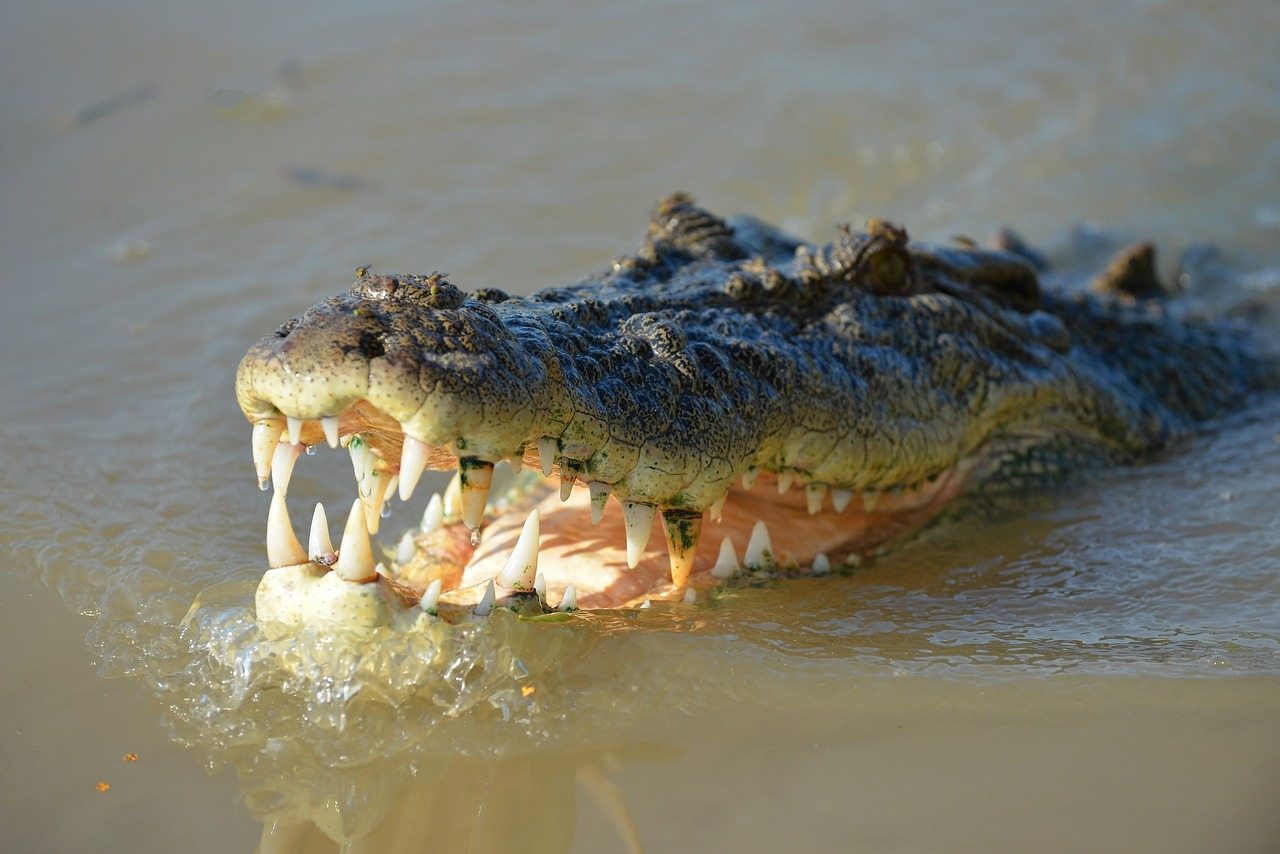 It’s wrong, God or no God, to torture little children just for the fun of it. What basis we have for making this confident moral claim is another thing, but we know, if we know anything, if we have any moral understanding at all, that that is wrong.”

As we began to discuss in Part IV of this series, atheists find themselves tied up in knots when it comes to the issue of morality.

As human beings created in the image and likeness of God, they know that right and wrong exist. They know that right and wrong are as real as the material world around them and assume it continually. But they cannot account for this in terms of their materialist worldview, which states that nothing exists but matter and energy. So they say that morality is relative from person to person and culture to culture and that moral absolutes do not exist. But then, when someone steals their stereo, they start talking about “right” and “wrong” as though these were as real as real can be. Confusing, I know.

The words above, spoken by atheist Kai Nielsen in debate with Christian philosopher J.P. Moreland (Does God Exist? p. 99) illustrate beautifully the tension the thoughtful atheist finds himself in when it comes to the subject of morality.

Notice that on the one hand, Nielsen insists that he “knows” the torture of little children is “wrong.” He knows this. On the other hand, he hints at the difficulty he has providing a philosophical “basis” for his sure knowledge when he writes, “What basis we have for making this confident moral claim is another thing.”

In effect, he’s saying, “Look, I understand that as someone who believes that nothing exists but material substances interacting according to unbending chemical and physical laws, I may have a hard time explaining exactly how I can make absolute moral statements. But whatever … I still know that the torture of little children is absolutely morally wrong.”

So let’s ask the question outright: On what basis, Mr. Kielsen, do you make “this confident moral claim”?

In fact, forget “confident”: on what basis do you make moral claims of any kind? After all, according to Richard Dawkins, isn’t our godless universe one in which there is “no design, no purpose, no evil, no good, nothing but blind pitiless indifference”? (River Out of Eden: A Darwinian View of Life, p. 33).

From an atheistic premise, how can “right” and “wrong” be anything more than words we use to describe what we approve or disapprove? What we find helpful or unhelpful? What is to our tastes and what is not? In which case, why doesn’t Nielsen just say he doesn’t approve of the torture of little children for fun and leave it at that?

When I discuss the issue of morality with those who doubt or deny the existence of God, it’s common to hear in response: “It sounds like you’re saying that atheists don’t believe in right and wrong, or that atheists are bad people.”

In fact, what I’m saying is nearly the reverse. It’s that because atheists have been created in the image and likeness of God and have the moral law etched into their very beings, they cannot escape believing in right and wrong. Whatever they may say about the non-existence of God and the non-existence of moral law in a materialist universe, like Kai Nielsen, they care about right and wrong and wind up living more or less as though they believed in the existence of a real and absolute moral law. As Nielsen says, “God or no God … we know …”

My point is that on the basis of their worldview, they cannot account for Right and Wrong, viewed as an objective moral law. The materialist cannot provide a basis for the existence or authority of an objective moral law. You can’t get soup from a stone and what I tell my atheist friends is that you can’t get moral law from material substances, no matter how much you tweek them by random mutation and natural selection.

If atheists wish to be consistent with what they say they believe about the nature of the universe in which we live, they should admit that “right” and “wrong” are ultimately illusory and abandon belief in them. If there is no God, morality is, as atheist philosopher Michael Ruse says, nothing more than “an aid to survival and reproduction.”

Morality is a biological adaptation no less than are hands and feet and teeth. Considered as a rationally justifiable set of claims about an objective something, ethics is illusory. I appreciate that when somebody says, “Love thy neighbor as thyself,” they think they are referring [to a moral law existing] above and beyond themselves …. Nevertheless, such reference is truly without foundation. Morality is just an aid to survival and reproduction … an ephemeral product of the evolutionary process …. It has no existence or being beyond this and any deeper meaning is illusory (The Darwinian Paradigm, pp. 262-269).

My experience is that simply drawing out this logical implication of the materialist worldview in the realm of morals can make some atheists stop and think — precisely because, like Nielsen, they know right and wrong are real and morality is important to them.

Others will respond as though there’s no problem: “Hey, we don’t need God in order to have ethics!”

For instance, take Peter Singer, Professor of Bioethics at Princeton University. He believes we can derive our own moral law from a consideration of what will bring about the greatest total amount of happiness in each situation.

On this basis, he argues for abortion. And it’s interesting to follow his logic because it’s the exact opposite of how most pro-abortion advocates argue. Most accept the universally held premise that “innocent human life” should not be taken, but then reject the notion that the unborn fetus counts as “innocent human life.”

It’s a matter of weighing things out on the scales of happiness.

Using this same rationale, Singer also argues in favor of infanticide — at least in certain cases. In his book Practical Ethics, he explains how the happiness standard works in practice:

When the death of a disabled infant will lead to the birth of another infant with better prospects for a happy life, the total amount of happiness will be greater if the disabled infant is killed. The loss of a happy life for the first infant is outweighed by the gain of a happier life for the second [not yet born]. Therefore, if killing the hemophiliac infant has no adverse effect on others, according to the total view, it would be right to kill him. (Quoted in First Things, May 2002, Letter from Wesley J. Smith)

Now, besides the fact that Singer’s logic here is utterly indistinguishable from that used by Nazi doctors to justify the elimination of the disabled and others with lives not worth living, some may have problems with this moral theory.

The question arises: what act couldn’t be justified if the standard of evaluation doesn’t include an act’s intrinsic goodness or evil but only the amount of happiness that accrues to others?

Sam Harris presents a variation on the happiness theme. In his lecture “The Moral Landscape” (available on YouTube) Harris argues that since (a) morality is concerned about increasing the happiness and well-being of conscious creatures (especially humans) and (b) these questions have factual answers, (c) these are questions science could over time answer for us — even as science answers all sorts of other factual questions.

For instance, does abortion on demand tend toward the enhancement of human happiness and well-being? Would allowance for infanticide on demand contribute to this goal? What about same-sex marriage? Science may not know the answers at this point. But these questions must have factual answers, and as science finds those answers then we’ll all know what is right and wrong on these issues.

That is Harris’s argument. And it can seem at first blush that maybe he has a point. After all, Christianity has always taught that the moral law of God is for mankind’s ultimate happiness and good. And Christianity has always taught that this moral law is written into nature and therefore accessible to reason. So why couldn’t reason/science over time figure out what is most conducive to the enhancement of human happiness and well-being?

But the more you listen to Harris the more you realize that he isn’t thinking in “moral” terms at all. When Harris uses the word, he’s thinking in purely practical, utilitarian terms. Just like Peter Singer.

Whereas most anyone would say that torturing little children is intrinsically “evil,” and that one who does this is “guilty” in a moral sense and “morally accountable” for his actions, Harris would prefer to say that the one who tortures little children is “really lousy at enhancing human happiness and well-being” and needs to be treated, well, as we might treat a dangerous crocodile that has somehow gotten loose. We don’t slap moral labels on the crocodile; we simply stop it from harming anyone.

You think I’m creating a straw man here. I’m not.

You understand that as a crocodile, it was only doing exactly what it has no choice but to do, given its nature.

The same holds for someone who attacks and tries to kill you with an axe. The axe murderer is only doing, Harris explains, what he must do given his nature, background, brain chemistry, etc. Because of this, there is no reason to start throwing around terms like “evil” or “guilt” or “punishment.” Rather, we should deal with him as we would a dangerous crocodile or snake. Cage him, but don’t call him names.

Personally, I appreciate Harris’s consistency. I really do, because it brings clarity.

Sort of like traffic laws. We don’t enact traffic laws because we think there’s something intrinsically “immoral” or “evil” about, for instance, driving on the left side of a road. (I hope there isn’t. I have some friends in England and Ireland.) We do it for the purely practical purpose of enhancing human happiness and well-being by keeping our streets from becoming rivers of blood.

And when Harris conceives of ax murderers as he conceives of crocodiles, and laws of morality as akin to traffic laws, he’s being consistent with his naturalist worldview.

For the atheist, moral law, right and wrong, must boil down to something along the lines of traffic laws or rules for a healthy diet. It just isn’t healthy to go around torturing little children for fun.

Of course, once again the logic of atheism drives us to conclusions that seem completely at odds with our intuitive sense of things as human beings. Who has ever looked at Charles Manson or Idi Amin or Pol Pot or Joseph Stalin and Adolf Hitler and thought to himself, “Yeah, those men weren’t very good at the enhancement of human happiness and well-being. There’s no reason to call them evil or desire to hold them morally accountable. After all, what they did is only what they had to do given their particular natures. No different than a rattlesnake biting someone who steps on it.”

I mean, who on earth actually thinks like this and believes it?

Up Next: How I Evangelize Those Who Doubt or Deny the Existence of God, Part VI