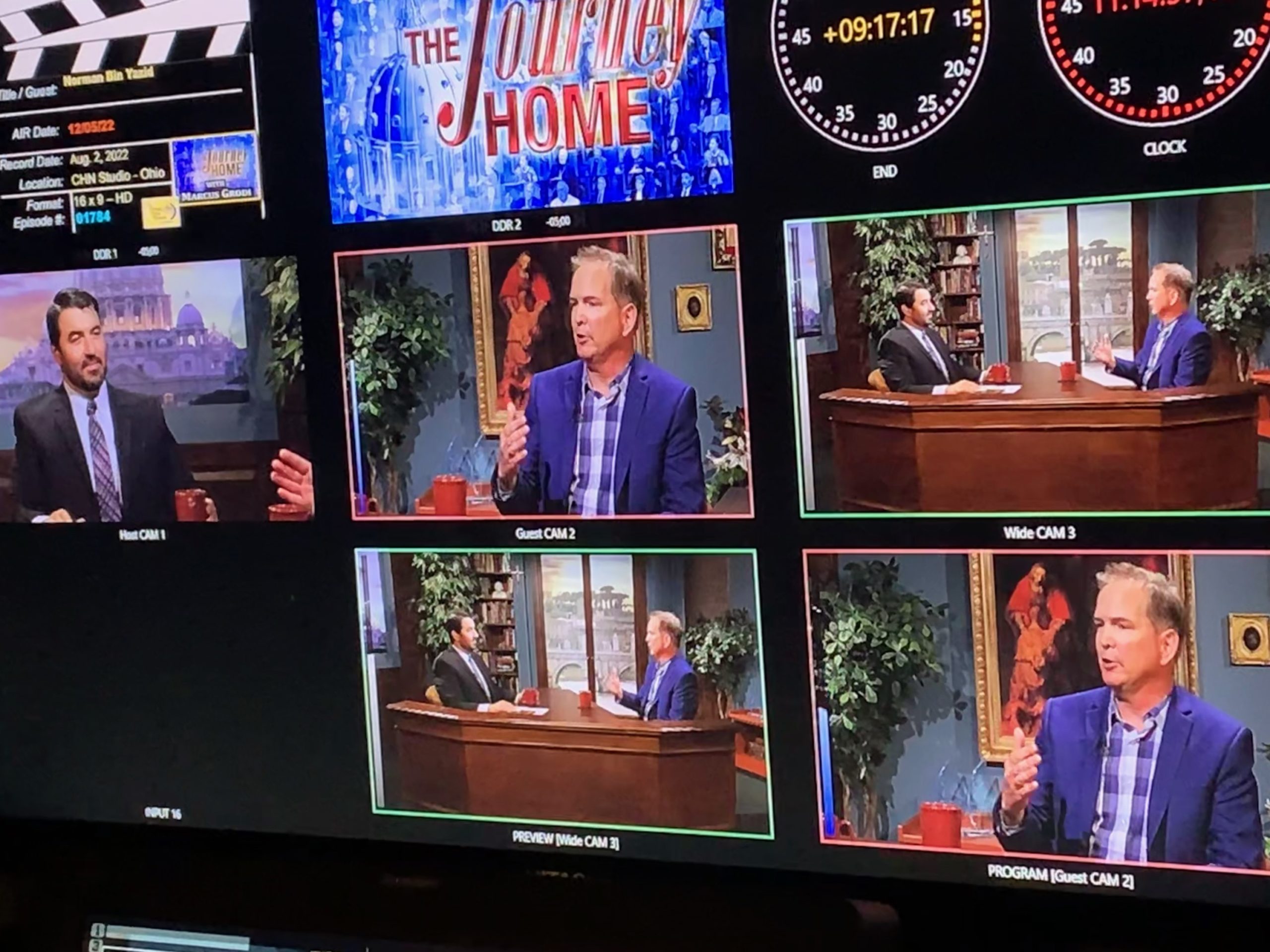 What a year it’s been for EWTN’s The Journey Home! In addition to all the great stories we were able to share, we underwent a major transition, as Marcus Grodi, the founder of the show, formally passed the torch to JonMarc Grodi, CHNetwork’s Executive Director, in September. Please join us in gratitude for the great work of Marcus over the past two and a half decades, and in congratulating JonMarc in his role as the new host!

According to site visits, social media activity and your feedback, here were the most popular Journey Home episodes from 2022: 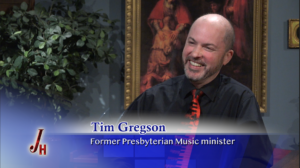 Dr. Tim Gregson came from a wonderful Christian family, and when he started attending a Mennonite school, a couple of things happened: first, he fell in love with choral music, and second, he began to become acutely aware of the divisions in Christianity.

He went on to become a music minister, but nagging questions about the nature of worship led him to explore early Christianity, and what he found there drew him more and more toward the reality of the Eucharist in the Catholic Church. Watch Dr. Gregson’s episode. 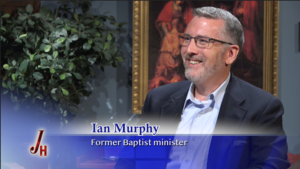 Dr. Ian Murphy returned to the show, having recently written his memoir, Dying to Live: From Agnostic to Baptist to Catholic.

Dr. Murphy grew up Christian, but became agnostic as a teenager before having a born again experience. A controversy over him mentioning his faith in a graduation speech developed in him a boldness to preach, eventually leading him to Baptist ministry before he began to discover the beauty and truth of the Catholic Church. Watch Dr. Murphy’s episode. 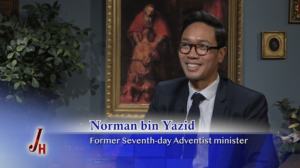 Norman bin Yazid had family roots in both Islam and Seventh-day Adventism, but was always drawn more to Christianity.

He pursued a call to ministry in an SDA context, but began to be troubled with some central tenets of their theology, and wondered if there might be another way to view the Scriptures than through the teachings of Ellen G. White.

Norman began to think and pray more deeply on the question of faith and reason, the meaning of beauty, and a proper view of Christian history.

Those questions would eventually lead him home to the Catholic Church. Watch Norman’s episode. 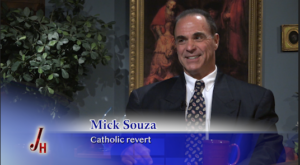 Raised Catholic by his mother and grandmother, Mick Souza was one of the smallest kids in his neighborhood, so he began working out, winning every athletic competition he entered, and eventually the Mr. Universe title in 1992.

Along the way, he got caught up in money, and sins of the flesh, but none of it satisfied, because he had drifted far from faith.

When his mother passed, it was a turning point, and Mick knew more than ever that he needed the Lord back in his life.

Mick shares the many ways since that initial turning point that the Holy Spirit has been continuing to mold him and make him more of the man that God always intended him to be. Watch Mick’s episode. 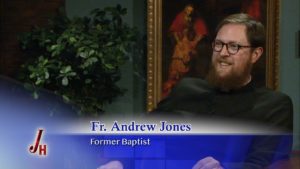 Fr. Andrew Jones came from strong Baptist roots, including many pastors and missionaries on his dad’s side of the family.

As a kid, he was fascinated by the Lord’s Supper, but always felt like there needed to be more to the celebration of it.

A trip to Greece and Italy just before college got him fascinated with icons, and the more he studied and prayed, the more he felt drawn to the ancient beauty of the Catholic Church and Her sacramental life. Fr. Andrew is a priest in the Diocese of Mobile, Alabama. Watch Fr. Andrew’s episode. 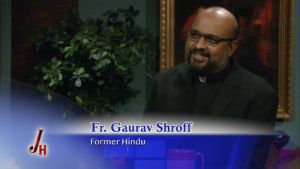 Fr. Gaurav Shroff was born in India, and spent part of his childhood in the United States before moving back.

His grandmother was the most observant Hindu in his family, and he remembers her devout prayers, as well as the various festivals he would celebrate with his extended family.

His love of classical music eventually led him to polyphony and Gregorian chant, and captivated by its beauty, he began to study the world that had produced it.

That led him to a powerful encounter with Jesus at a Good Friday service, and began in earnest his path to the Catholic Church and the priesthood. He now serves as a priest in the Archdiocese of Atlanta. Watch Fr. Shroff’s episode. 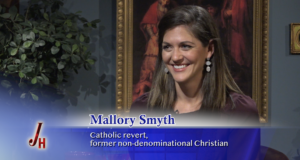 Mallory Smyth was raised in a strong Catholic family, but questions about the Church’s moral teaching, and her own frustration with bad parish experiences, led her to stop going to Mass once she got to college.

After finding life without God to be empty, Mallory started to give Christianity another try by exploring nondenominational congregations, but over time, came to realize that the Catholic Church, despite all of its broken and flawed members, was her true spiritual home. Watch Mallory’s episode. 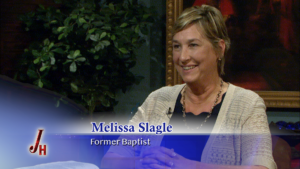 Melissa Slagle was raised Baptist, but really began to be proactive in her relationship with Jesus through the mentorship of a high school teacher.

Later, when one of her daughters announced she was becoming involved with United Pentecostals, who didn’t believe in the Trinity, it led Melissa to wonder who had the correct interpretation of Scripture.

The quest to understand that dilemma led her first to a thorough re-reading of the New Testament, and eventually to the claims of the Catholic Church, which had preserved the interpretation of Scripture from the time of the apostles. Watch Melissa’s episode. 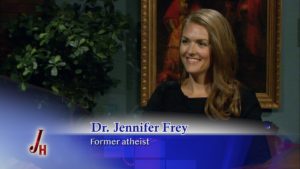 Dr. Jennifer Frey grew up in a moral family, but her parents rejected organized religion because of their negative personal and political experiences, and she herself became a convinced atheist in high school.

Dr. Frey went on to study philosophy as an undergrad, and was surprised to discover that there were intelligent people in that field who also believed in God.

It raised a number of questions for her about how to best do philosophy, and those questions eventually led her to take seriously the claims of the Catholic Church. Watch Dr. Frey’s episode. 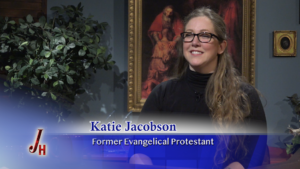 Katie Jacobson grew up with experience in Baptist and Lutheran churches, and when she met people from even more denominations in Bible college, it really made her wonder about which church was the True Church.

Her quest to find out even led her to try membership classes with Latter Day Saints and Jehovah’s Witnesses.

A visit to Theology on Tap opened up a million questions about Catholicism for her, and started her on a journey to undo years of myths and misunderstandings about the Church, which she eventually came to realize was her true spiritual home. Watch Katie’s episode.

What a year! And we can’t wait to share another one full of great Journey Home episodes in 2023!

To support our work into the new year, please consider an end-of-year gift today!