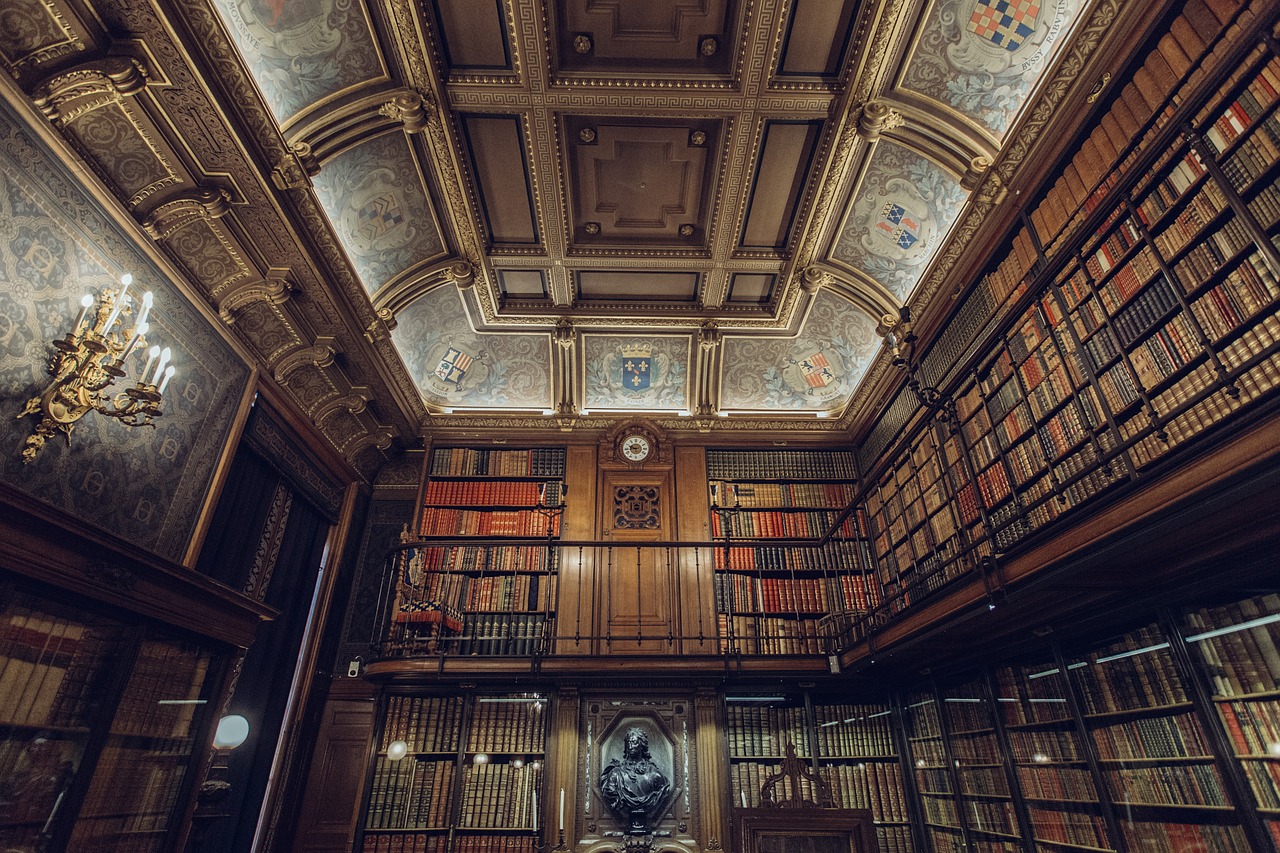 I can’t address the ninth reason without first thanking God for the gift of loving to read, for it was through reading that I also found a reason to cross the Tiber.

History and biographies have been great loves for as long as I can remember. Each preceded my love for theology. But God, the subject of theology, had my attention from earliest memory in the stories I heard at home and in Sunday School. It wasn’t difficult to find Him later in biographies of distant figures as well as those who lived in my lifetime. Virtually everyone who thinks beyond the necessities of life will give thought to God’s existence and attributes, perhaps but briefly, but the thought will inevitably surface. I suspect that even those persons who say they’ve given very little thought as to whether God exists have given more than they’re willing to admit. (Oh, Norman, how would you know that? I know because God created every human being for Himself, and to every person He’s given a longing which He alone can satisfy.)

Putting aside history and biographies briefly, the first novel where I found God behind the script was Tolstoy’s War and Peace. Tolstoy was not Catholic. He was Russian Orthodox, but Orthodoxy was as removed as Catholicism from my experience as a boy; nevertheless, Orthodoxy was (to me) more than a first cousin to Catholicism, maybe a double first cousin. I was fifteen when I first read War and Peace. I didn’t think at the time that the author’s intent was to write a book focused on God and His Church, but it was obvious that Tolstoy’s characters were engaged with God in the complexities of their lives. I was later to learn that Tolstoy vacillated for decades between loving Orthodoxy and hating it, struggling all the while over the divine nature of Christ while loving the man Jesus. So strong and mysterious was the reality of God to Tolstoy that he wasn’t able to write such a monumental work without bringing his ever-changing but God-centered faith into it. When reading War and Peace I didn’t want to do anything else. The characters were as real as the people with whom I lived. I was especially moved by Tolstoy’s treatment of Prince Andrei’s life and death and began to consider the experience of dying in a more reverent light. I was not too young to think seriously on what lay beyond our mortality. The novel also kindled a flame of love for Russia which has never dimmed. I have recently begun reading the novel for the third time.

A second novel which brought God to the forefront was Brideshead Revisited by Evelyn Waugh, a convert to Catholicism. I was thirty-two when I plunged into his beautifully written work. Page by page I found myself increasingly intrigued by the hold Catholicism had on each member of the Marchmain family until the end of the story when Lord Marchmain — who had long lived outside the Church — made his silent and final confession by signing himself with the Cross. Having witnessed that long-prayed-for-but-unexpected act of faith, Lord Marchmain’s daughter, Julia, who herself had lived outside the Church’s boundaries, found that she could not accept the proposal from the man she loved, Charles Ryder, because he was a non-believer. (“I can’t shut myself out from His mercy. That is what it would mean; starting a life with you, without Him … to set up a rival good to God’s.”) Julia’s hope was to make atonement by rejecting a proposal that would bring satisfaction in some areas of her life, but in the deepest parts of her soul would eventually bring despair. I remember being fascinated by Julia’s mother’s description of Catholicism’s beauty, an idea that had never crossed my mind though I had long admired the genius of Catholic architects, painters, and sculptors. I had judged their majestic works as an expression of faith, and correctly so; but until I read Lady Marchmain’s words I had never considered that Catholicism itself contained an innate beauty, a beauty that emanates from truth.

Besides the Bible, the book with the greatest influence on my thinking remains Thomas à Kempis’ The Imitation of Christ. Written by a monk in the early fifteenth century, it is a combination of proverbs, a guide to Christian living, a dialogue between Christ and the reader, and a theology of the Eucharist. Thomas expresses the Catholic Faith distilled and pure, the Christian Faith at its essence. Not surprisingly, Thomas depends heavily on Scripture to make his multiple points. It’s hard to imagine any Christian reading it thoughtfully without considering the benefits of a purer and more charitable life.

Below is a listing of books which have deepened my understanding of God’s will and purposes.

The Teachings of the Church Fathers. John R. Willis, S.J.

The City of God. Saint Augustine, translated by Marcus Dods, D.D., with an introduction by Thomas Merton

The Apostolic Fathers. Translated by J.B. Lightfoot and J.R. Harmes

The Way of the Mystics. John Michael Talbot and Steve Rabey

I Am with You Always: A Study of the History and Meaning of Personal Devotion to Jesus Christ. Father Benedict Groeschel

Triumph: The Power and the Glory of the Catholic Church: A 2,000 Year History. H.W. Crocker III

The Mass of the Early Christians. Mike Aquilina

Faith of Our Fathers: Why the Early Christians Still Matter and Always Will. Mike Aquilina

Christ, the Life of the Soul. Blessed Columba Marmion

The Way of Perfection. Saint Teresa of Avila

Teresa of Avila: The Progress of a Soul. Cathleen Medwick

Finding God’s Will for You. Saint Francis de Sales

Saint Teresa of Jesus and Other Essays. E. Allison Peers

Reluctant Saint: The Life of Francis of Assisi. Donald Spoto

Francis of Assisi: the Life and Afterlife of a Medieval Saint. Andre Vauchez

We Were with Saint Francis: As Told by His First Companions. Edizoni Porziuncola

The Life of Saint Francis of Assisi. Nesta de Robeck

The Saint and the Sultan. Paul Moses

The Dark Night of the Soul. Saint John of the Cross

The Collected Works of Saint John of the Cross. Translated by Kieran Kavanaugh, Otilio Rodriguez

John of the Cross: Doctor of Light and Love. Kieran Kavanaugh

The Practice of the Presence of God. Brother Lawrence

The Steps of Humility. Bernard, Abbot of Clairvaux, translated by George B. Burch

Newman and His Contemporaries. Edward Short

The Dialogue. Catherine of Siena

The Spiritual Exercises of Saint Ignatius. Translated by Anthony Mottola

The Story of a Soul. Saint Therese of Lisieux, translated by John Clarke, O.C.D.

Come Be My Light: The Private Writings of the “Saint of Calcutta.” Edited with commentary by Brian Kolodiejchuk, M.C.

Rise, Let Us Be on Our Way. Saint John Paul II

Man and Woman He Created Them. Saint John Paul II

In the Beginning: A Catholic Understanding of the Story of Creation and the Fall. Benedict XVI

Pope Francis: His Life in His Own Words: Conversations with Jorge Bergoglio. Francesca Ambrogettie and Sergio Rubin

Pope Francis in His Own Words. Edited by Julie Schwietert Collazo and Lisa Rogak

The Name of God is Mercy. Pope Francis.

The Intimate Merton: His Life from His Journals. Thomas Merton

No Man is an Island. Thomas Merton

The Wisdom of the Desert. Thomas Merton

On Being Catholic. Thomas Howard

The Night is Far Spent: A Treasury of Thomas Howard. Selected by Vivian W. Dudro

My Life with the Saints. James Martin, S.J.

The Way of the Mystics. John Michael Talbot

Jesus and the Jewish Roots of the Eucharist. Brant Pitre

The Courage to Be Catholic. George Weigel

The Life You Save May Be Your Own: An American Pilgrimage. Paul Elie

The Duty of Delight. Dorothy Day, her diaries

The above list is merely a beginning. There are hundreds of others that any student of theology and history could recommend.

The greatest influence on me by far has been the Bible. First, the King James Version, which I’ll always be thankful was the Bible from which I was required in childhood to memorize certain passages and psalms. As an English translation it has no equal for beauty and majesty of language. Other translations of influence have been the New American Standard Bible, the New Revised Standard Version (though its struggle to use inclusive language is often awkward and unnecessary), and the New American Bible. While much can be gained through extensive study of theology and history, nothing comes close to the study of God’s Word. It is the source from which theology springs and the compass which has guided decision-making for millenia. Until the end of time the Bible will shape the thinking and actions of hundreds of millions of people. For any seeker of truth, it is indispensable.

Up Next: Twelve Reasons a Protestant Pastor Became Catholic – The Tenth Reason