The Top 10 CHNetwork Online Articles and Features of 2019 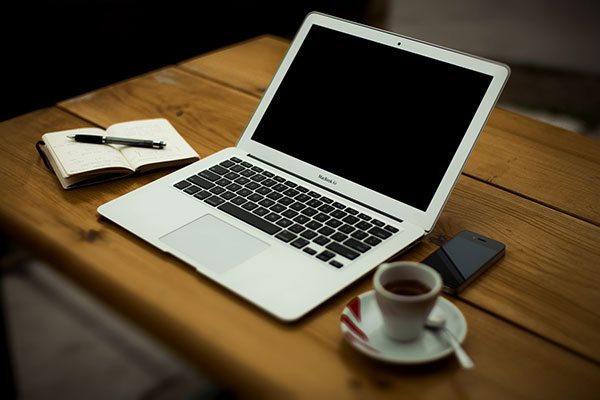 As 2019 comes to a close, we’ve put together our end-of-the year list of the top ten most visited written conversion stories, articles, and features from the past twelve months. Read, watch, revisit, share! Here they are, starting with #10:

Growing up in a tight-knit Jewish community, Melissa Zelniker-Presser knew almost nothing about Jesus or Christianity.  In college, she was befriended by enthusiastic evangelicals, and was excited to begin a relationship with Christ.  However, she still hungered for more, and when a friend gave her a biography of St. Edith Stein, Melissa knew she’d found a spiritual friend she could truly relate to. Read Melissa’s story.

9. Where is My Paul? – Melissa Slagle 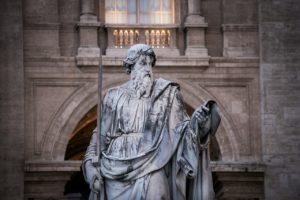 When Melissa Slagle a Baptist, discovered that her daughter was becoming involved with United Pentecostalism, she became concerned. She knew that this branch of Pentecostalism didn’t accept the Trinity, and she knew she needed good arguments to help set the record straight. Little did she know that this search would lead to greater questions about the very nature of Christian authority, and eventually lead her to the Catholic Church! Read Melissa’s story.

8. How I Grew Into the Catholic Faith – Curtis Walker

Why did I write this story? To answer a question posed to me by my mother: ‘Why did you feel you needed to go to the Catholic Church?’ In other words, why did her Christian son, who already had a personal relationship with Jesus, feel drawn to enter the Catholic Church? A good part of my answer lies in the fact that many times, down through the years, I found myself saying, ‘Why didn’t anyone tell me this?’ or, ‘Why have I never seen that in the Bible?’ Read Curtis’s story.

“When I first started watching The Journey Home, I have to be honest and say that I thought, Those Catholics are ridiculous! They have to put on conversion stories to try to persuade people to become Catholic! But something did happen from watching those first conversion stories. It put an intense, burning desire in us both to prove that the Catholic Church was wrong!” Read Sharon’s story.

6. Once Upon a Rosary: A Pastor’s Story of Conversion to Catholicism Through Mary – Anne Barber

“Something had happened to me, and I wasn’t going to fight it. I knew that God was sending me in this direction and that I would become Catholic. Not because of the Church’s great theology, or because the Fathers of the Church were convincing, or because I had thoroughly analyzed my experiences in light of scientific evidence, or because I understood anything intellectually. Simply put, I had met Mary.” Read Anne’s story. 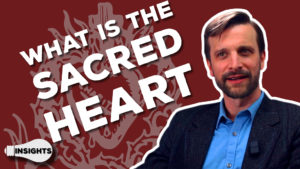 5. Understanding Devotion to the Sacred Heart of Jesus – David Sanborn

As a nondenominational pastor, David Sanborn understood the idea of the love, mercy compassion of Jesus, but was a little taken aback at the idea that Catholics had a devotion to a body part of Jesus in the Sacred Heart devotion. However, the more he came to understand that the devotion flowed forth from an understanding that Jesus is both fully human and fully divine, the more he came to realize just how profound it was to meditate on the fact that Jesus has not only a spiritual heart that breaks for us, but a physical heart that bled for us. Watch David’s video. 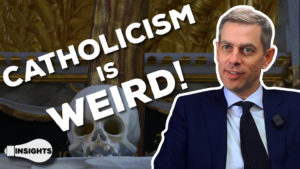 RJ Snell grew up as a pretty stoic and practical Canadian Baptist, so when he first became interested in the Catholic Church, he was also somewhat put off by it, because of the gritty and visceral nature of some of Her devotional practices. Candles, incense, statues, relics — all these things confused and repelled him at first, but eventually the deeply incarnational Catholic approach to understanding our relationship with God was actually one of the main things that drew him to want to become Catholic as an adult. Watch RJ’s video.

3. A Baptist Minister’s Journey to the Eucharist – Article Series by Ken Hensley

In an excellent five-part series, former American Baptist pastor Ken Hensley shares the series of ideas and events that led him to accept Catholic teaching regarding the Real Presence of Jesus in the Eucharist. He discusses how a study of the Church Fathers, the Old Testament, and the writings of St. Paul led him to believe that Jesus meant something real and sacramental when he instituted the Eucharist at the Last Supper. Read Ken’s series. 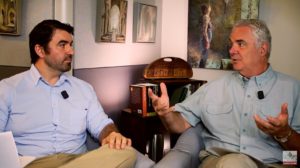 In this age when so many forms of Christianity exist, and so often the mode of Christianity one chooses tends to be based on habit or preference, what are we to make of Christ’s prayer in John 17 that all His followers be one? Vatican II recognized that the way Catholics talk about our non-Catholic brothers and sisters needed to change, given that so many Christians outside the Catholic Church share our belief in the Trinity, the saving death and resurrection of Jesus, the crucial nature of Baptism, and more. But with all of those things in common, is it still necessary for Catholics to invite their non-Catholic brothers and sisters home to full communion with the Catholic Church? Watch the video.

1. An Atheist Goes to the Adoration Chapel – John Knutsen 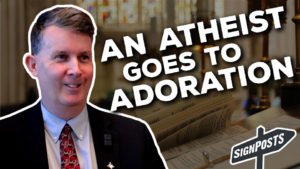 Though raised Catholic, John Knutsen didn’t really believe in God, and when his brother died of AIDS, he decided he was done with religion forever. A few years later, during a personal crisis, he found an unexpected friend in a retired priest, who listened patiently to John’s frustrations. And after a rainy night when John found himself weeping in an empty church, that same priest heard John’s first confession in decades. Watch John’s video.