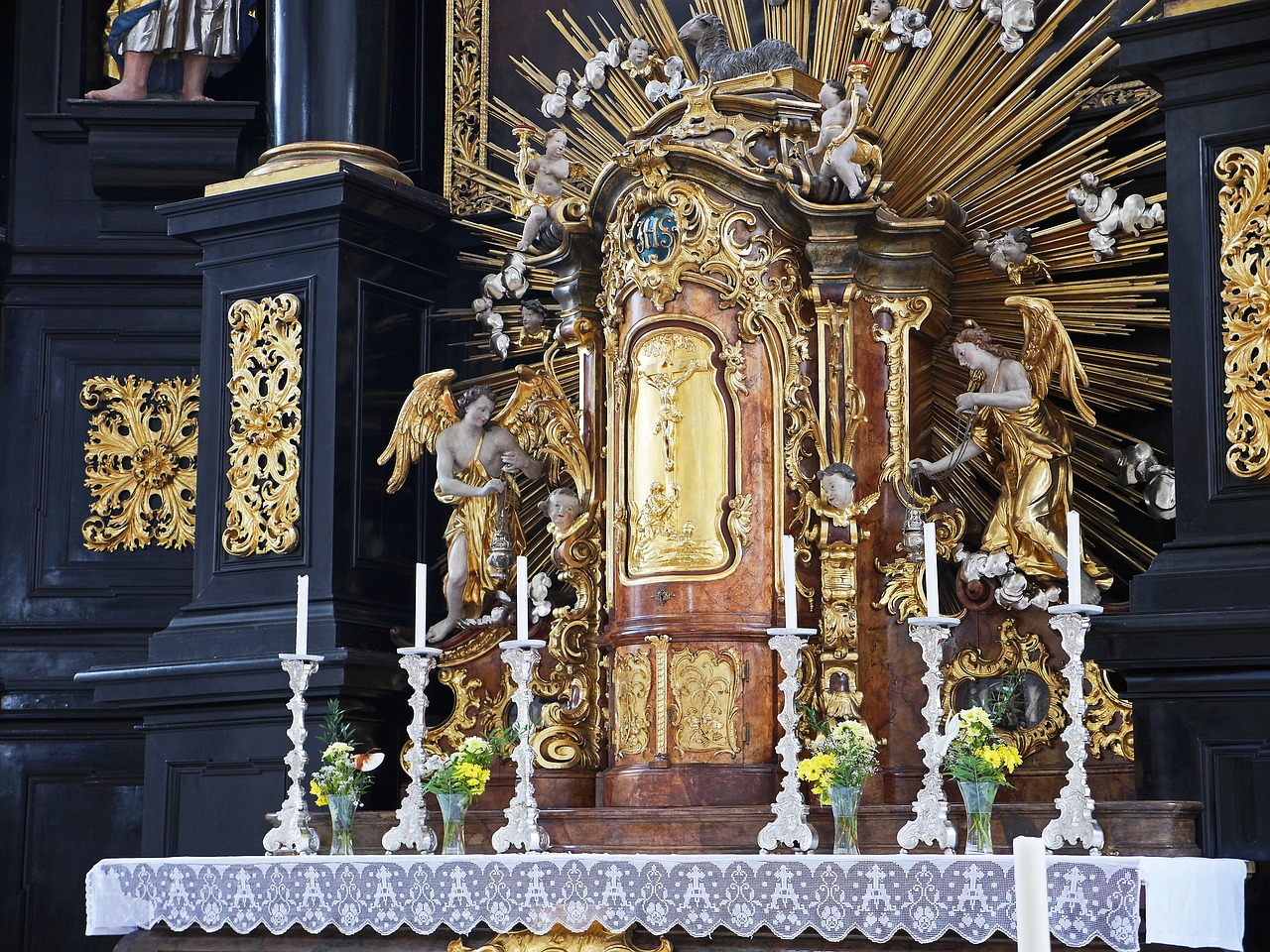 This is the conclusion of a 6-part series on the Mass. Read the previous installments: Part I Part II Part III Part IV Part V

The Liturgy of the Mass

The Mass of today differs greatly from the very simple ceremony followed by Christ and His Apostles. Though celebrated in the context of the Jewish Passover meal, the Christian Eucharist proper consisted in: Consecration of bread, Consecration of wine, Breaking of Bread, Communion of the Bread, Communion of the Wine. Something similar to the Jewish Passover table blessing must have been used from the very beginning to enshrine the Consecration. Before Jewish Christians were expelled from temple and synagogue, they frequented the Sabbath reading service and only then retired to one of their own houses for the Eucharist.

Readings from Apostles or Prophets

Homily based on these readings

Common prayers for the needs of the Church

Presentation of bread and wine mixed with water

Prayers and thanksgiving over the oblation

Collection for the poor

The Roman Mass had received a more or less definitive form at the hands of Pope Gregory the Great (d. 604). After centuries of additional but minor influence, it was given a uniform shape throughout the Roman rite in Pope Pius V’s Missale Romanum of 1570. According to the Constitution on the Sacred Liturgy of Vatican Council II, the Mass was to undergo a sweeping revision (50):

The rite of the Mass is to be revised in such a way that the intrinsic nature and purpose of its several parts, as also the connection between them, may be more clearly manifested, and that devout and active participation by the faithful may be more easily achieved.

For this purpose the rites are to be simplified, due care being taken to preserve their substance; elements which, with the passage of time, came to be duplicated, or were added with but little advantage, are now to be discarded; other elements which have suffered injury through accidents of history are now to be restored to the vigor which they had in the days of the holy Fathers, as may seem useful or necessary.

Although the Mass has undergone many changes since the foundation of the Church, its basic form has remained the same.

When I entered the Church in 1963, the Mass was celebrated in Latin. Since the Second Vatican Council, Catholics have complained about changes in the Mass. Some of the complaints are:

Then there are those who have no problems with the above changes in the Mass, yet still have some of the following complaints with today’s liturgical celebration.

When the celebration of the Mass does not meet our expectations, we put the blame elsewhere instead of looking at ourselves. There have certainly been abuses with respect to the manner in which the Mass has been celebrated since Vatican Council II, abuses that must be corrected.

Jesus’ passion and death on Calvary, which happened some 2000 years ago, was a one-time event. But in each Mass, we mysteriously transcend time. Calvary is made present, and we are with our Lord as He undergoes His passion and death as the price for our redemption. The Mass is therefore never the time or place for talking, joking, sleeping, gimmicks, praying the Rosary, popular music, etc. If we were present on Calvary as our Lord was dying, would we be joking, laughing, or talking? Regardless of the language or the rite used, reverence during the Mass depends on all of us — celebrant, ministers, laity — and inspiring music. We need to understand, be attentive and responsive as to what is taking place in each part of the Mass. The words spoken by the priest, “This is My body; this is My blood,” should be enough to invoke within each of us feelings of great joy, peace, reverence and love, showing that we truly believe in and understand what Jesus is doing for us at that moment. It is important that we always come to celebrate the Mass in thanksgiving to our Lord for His great gift of Himself to us. And since His resurrection is also made present in the Mass, we must be there to welcome the risen Lord and Savior into our lives.

As a Jew, the joyous celebration of the Passover once a year allowed me to thank God for freeing my ancestors and myself from slavery in Egypt, for bringing us to the Promised Land, and for the hope of the Messiah’s coming. As a Catholic, the daily celebration of the Mass allows me to thank Jesus each day for allowing me to share in His life here and now. I do not need the Church to make laws requiring me to attend Mass on Sundays. Our Lord’s request, “Do this in memory of Me,” is of itself sufficient reason for me to receive Him as often as possible.

Worship of the Eucharist

Paragraph 1378 of the Catechism of the Catholic Church states:

In the liturgy of the Mass we express our faith in the real presence of Christ under the species of bread and wine by, among other ways, genuflecting or bowing deeply as a sign of adoration of the Lord. The Catholic Church has always offered and still offers to the sacrament of the Eucharist the cult of adoration, not only during the Mass, but also outside of it, reserving the consecrated Hosts with utmost care, exposing Them to the solemn veneration of the faithful, and carrying Them in procession.

Catholic churches have a tabernacle which houses the Blessed Sacrament. Paragraph 1379 of the Catechism of the Catholic Church states:

The tabernacle was first intended for the reservation of the Eucharist in a worthy place so that it could be brought to the sick and those absent, outside of Mass. As faith in the real presence of Christ in his Eucharist deepened, the Church became conscious of the meaning of silent adoration of the Lord present under the Eucharistic species. It is for this reason that the tabernacle should be located in an especially worthy place in the church and should be constructed in such a way that it emphasizes and manifests the truth of the real presence of Christ in the Blessed Sacrament.

It was my Jewish background regarding the Temple of Jerusalem and the synagogue worship that helped me see how blessed Catholics are to have these tabernacles in their churches. I would like to share briefly some of that background with you.

In the original Temple of Jerusalem (Solomon’s Temple, c. 950 BC) stood an innermost sanctuary, or back room, called the Holy of Holies. This back room was the proper abode of Yahweh, housing also His throne, i.e., the Ark of the Covenant. According to Deuteronomy 10:1-5, Moses built an ark of acacia wood at Yahweh’s command, and put inside it the two stone tablets on which Yahweh had written the Ten Commandments. Besides the Ark, the Holy of Holies contained two large gilded wooden figures called Cherubim. Their outstretched wings protected the Ark and were thought to afford a throne for God, Who, of course, was not represented by any figure. A veil separated the Holy of Holies from other sections of the Temple. It was believed Yahweh was enthroned above the Ark and the Cherubim in a thick cloud (1 Kings 8:1-13). This belief in Yahweh’s presence in His Temple was the whole reason for the worship celebrated only there. No one except the High Priest could enter the Holy of Holies, and then only once a year on the Day of Atonement.

After the destruction of the Temple by the Romans in AD 70 and the disappearance of the Levitic priesthood, Jewish worship continued to take place in synagogues centered around the Torah (which is a scroll containing the first five books of the Bible), the Prophets, blessings and praise to Yahweh as well as the Psalms. In antiquity, the only required equipment for a synagogue was a chest to contain the sacred scrolls (the Torah). In time, it became a practice to cut out a niche for the Torah in the east wall. This receptacle is called the Holy Ark, an expression allusive of the Ark of the Covenant. At an early date, a platform was introduced for reading the Torah. A lamp called the eternal light was hung before the Holy Ark and was kept burning constantly out of reverence for the Torah. In present day Orthodox synagogues the structure and worship services are essentially the same.

In Catholic Churches, near the tabernacle a sanctuary lamp burns continuously as a sign of the Real Presence of Christ. How blessed Catholics are! Men, women or children can approach God in the tabernacle and pray in His presence. As mentioned, in the days of the Temple of Jerusalem, only the high priest could enter the Holy of Holies. Yet, how many Catholics make use of this divine gift from our Lord? If people believed their God is truly, physically present in the Eucharist, why are not many more people coming to these tabernacles each day and praying to and adoring Him?

The Church and the world have a great need for Eucharistic worship. Jesus awaits us in this sacrament of love. Let us not refuse the time to go to meet him in adoration, in contemplation full of faith, and open to making amends for the serious offenses and crimes of the world. Let our adoration never cease.

On the evening of December 24, 1961, an event took place that was to change my life forever. After spending a tense year struggling with the idea of conversion to Christianity and what effects it might have on my family, I decided to watch midnight Mass in a television broadcast from St. Patrick’s Cathedral in New York City. During the consecration, as the bishop elevated the consecrated host, I looked at it and said, “I believe! My Lord and my God.” Instantly, all the tensions within me disappeared, and I felt at peace. Everything I had read and studied about Jesus became crystal clear. No doubting or wandering any more! Jesus was my Savior and my God.

St. Paul experienced an instant conversion when he saw Jesus in person on his way to Damascus. I also became a convert to Christ when I saw Him in the Eucharist. It was the same Christ that Paul had seen. From that moment, I knew Jesus was God and the Messiah I had been anticipating, and that He is present Body, Blood, Soul, and Divinity in the Eucharist.