Why Devotion to Mary? A Jewish Convert’s Perspective, Part IV 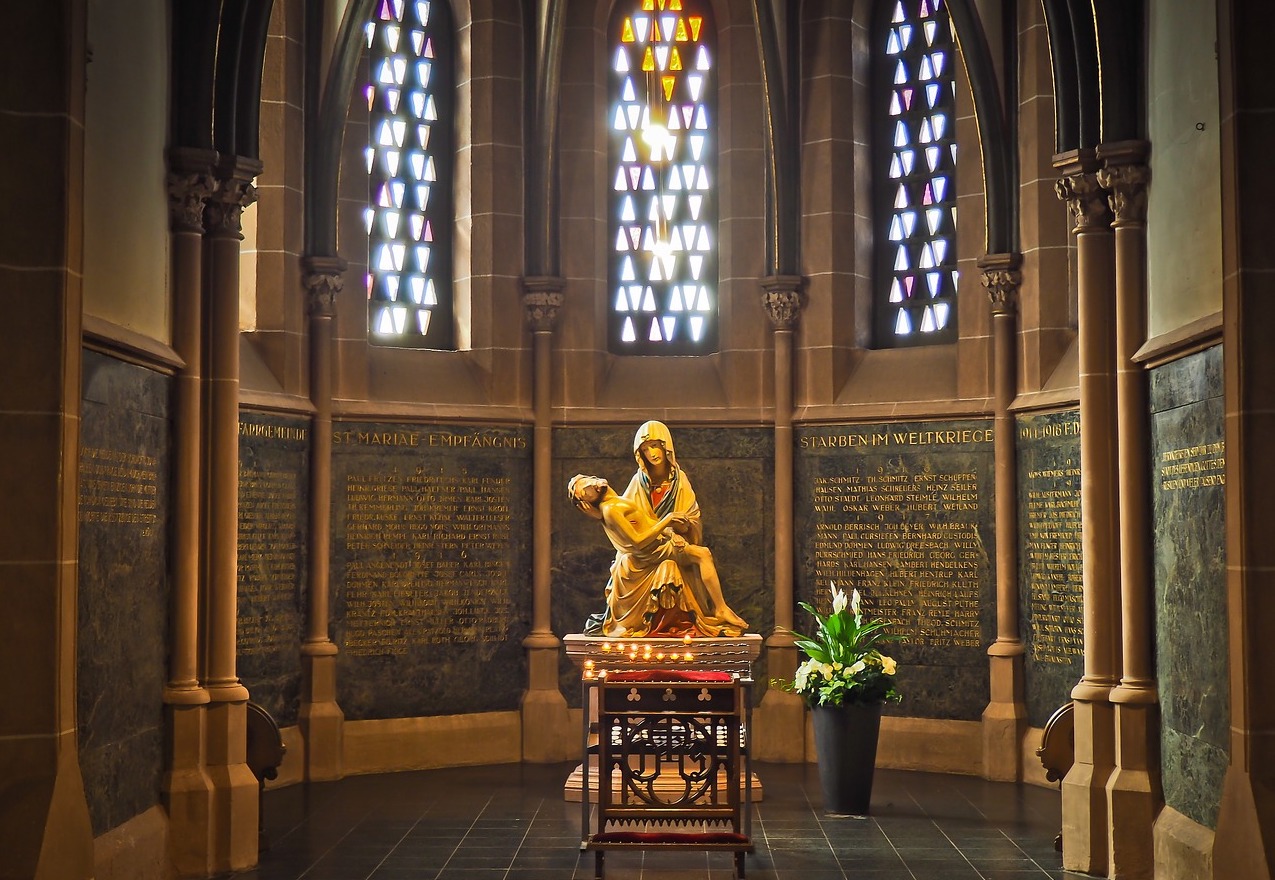 This article is part of an ongoing series. Part I Part II Part III

The Catechism of the Catholic Church states in articles 490 and 491:

490 To become the mother of the Savior, Mary “was enriched by God with gifts appropriate to such a role.” The angel Gabriel at the moment of the annunciation salutes her as “full of grace.” In fact, in order for Mary to be able to give the free assent of her faith to the announcement of her vocation, it was necessary that she be wholly borne by God’s grace.

491 Through the centuries the Church has become ever more aware that Mary, “full of grace” through God, was redeemed from the moment of her conception.

Pope Pius IX, on December 8, 1854, proclaimed Mary preserved from Original Sin, beginning with the moment of her conception. The privilege accorded her stems from the source and basis of Mary’s essential impeccability, acknowledged since the first centuries of Christianity. Said the Pope:

We declare, proclaim, and define that this dogma is revealed by God and therefore to be firmly and unremittingly believed by all the faithful: namely the dogma which holds that the most Blessed Virgin Mary, from the first moment of her conception, by a singular grace and privilege from Almighty God and in view of the merits of Jesus Christ was kept free of every stain of Original Sin. (Ineffabilis Deus)

The Fathers of the Eastern tradition call the Mother of God “the All Holy” and celebrated the Feast of the Immaculate Conception as early as the seventh century. For the Greeks, initiators of the feast, the expression “Immaculate Conception” meant that Mary, from the first moment of her life, was preserved from sin her whole life long. Did it also mean that she was spared even Original Sin? Latin theology stands firm on two things: (a) every human being is infected with Original Sin and bears its consequences; (b) this hereditary sin is remitted through the merits of Christ, Redeemer of the entire human race.

Three things may be noted in the dogma’s definition:

From February 11 to July 18, 1858, our Blessed Mother appeared eighteen times to a 14 year old girl named Bernadette Soubirous in the French city of Lourdes. On March 25, 1858, Feast of the Annunciation, the Lady revealed her name: “I am the Immaculate Conception.” Today this great shrine approved by the Church claims about four million visitors each year who come seeking spiritual and physical cures. They also come to pray for conversions and to honor our Lord and His Mother.

By the authority of our Lord Jesus Christ, of the Blessed Apostles Peter and Paul, and by our own proper authority we pronounce, declare, and define as Divinely revealed dogma that Mary, Immaculate Mother of God ever Virgin, after finishing the course of Her life on earth, was taken up in body and soul to heavenly glory. (Munificentissimus Deus)

By these words Pope Pius XII, exercising Pontifical Infallibility, declared on November 1, 1950, that the Assumption was a dogma of faith and was henceforth to be believed as such by the faithful. The language of the definition expresses its object precisely: “having finished the course of her life on earth,” Mary was “glorified in body and soul.” That is to say, Mary is already in the state that will be true of the elect after the “resurrection of the dead.” This implies a transition from the bodily state proper to life on earth to the mysterious but real state, proper to eternal life.

In the case of Mary, how did the transition occur? Was it by an immediate transformation without going through death, i.e., without prior separation of the soul from the body? Or was it by an anticipated resurrection, which presupposes that Mary was dead? The definition purposely does not take a position on this point. It remains a question that theologians may freely debate. Discussion aside, let it simply be said that the opinion that Mary, like her Son, passed through death in order to be raised up, immediately or after a short interval, has by far the stronger support in tradition. In no way did the question of a new revelation arise. Hence, if the Assumption was to be declared a “Divinely revealed dogma,” it had to be contained in the established sources of Revelation. The dogma takes note of this, saying that the “ultimate basis” of the defined truth was found in Sacred Scripture. However, in referring it to the Bible, the papal document does not mean to suggest that the Assumption can be “read” there in an immediate and explicit manner. In the present state of biblical scholarship, it seems difficult to go beyond this statement: that the dogma of the Assumption, “Divinely revealed,” is really contained in Revelation in an implicit manner.

The Feast of the Assumption of Mary is one of the oldest and most solemn feasts of the Church. Its history dates back to at least the seventh century when the feast day was already celebrated at Jerusalem and Rome.

What is the meaning of the Assumption of Mary? A culmination! “Blest is she who trusted…, who believed” (Luke 1:45). The promises of the Lord were fulfilled for Mary, and as always, beyond all expectation. Her glorification in body and soul is a result of divine love. But it also came, so to speak, as the logical conclusion of her vocation on earth and the way she lived it. She lived her divine Motherhood in utter harmony with her Assumption, the same as with her Immaculate Conception and Perpetual Virginity, both called for by the supernatural motherhood. How could the body of her in whom “the Word was made flesh” to save the flesh or the body of her that totally escaped the power of sin have known the corruption of the grave?

If anyone has followed Christ to the utmost, without the least failing, it is Mary. How, then, could He not gather her with Him, body and soul, to the glory which the Cross represents as the way and the door? What other reward could be imagined for Mary than this immediate and total participation in the life of the Risen Lord? Some day all the blessed will rise at the resurrection and together with our Mother Mary totally participate in the life of Christ.

A “mediator” is one who stands between two persons or groups of persons either to facilitate an exchange of favors or, more often, to reconcile parties at variance. As applied to Mary, the title “Mediatrix” dates back to the sixth century in the East and to the ninth century in the West. Since the seventeenth century, “Mediatrix” has been widely used by Catholics everywhere. Our Lady may be styled “Mediatrix” under one of three conditions.

In whichever of these three meanings it may be taken, Mary’s mediation must always be understood as being secondary to, and dependent on, Christ’s primary and self-sufficient mediatorial role.

When we say that our Lady is Mediatrix, as dispenser of graces, we mean that all favors and blessings granted by God to His rational creatures are granted in virtue of and because of her intervention. The manner in which she exercises her role is, specifically, by way of intercession. It is not necessary that we explicitly implore her intercession in our prayers. But whether we mention her or not, it is through her that we receive whatever we receive. Since she is our loving Mother in the supernatural realm, she knows our needs and wishes to help us in all of them; and since she is the Mother of God, her prayer on our behalf cannot but be most powerful and efficacious. The Council Fathers at Vatican Council II stated in Chapter 8 on the Constitution on the Church:

There is but one mediator as we know from the words of the apostle, “for there is one God and one mediator of God and men, the man Christ Jesus, who gave himself a redemption for all” (1 Tim, 2, 5–6). The maternal duty of Mary toward men in no way obscures or diminishes this unique mediation of Christ, but rather shows his power. For all the salvific influence of the Blessed Virgin on men originates not from some inner necessity, but from divine pleasure and from the superabundance of the merits of Christ. It rests on his mediation, depends entirely on it and draws all its power from it. In no way does it impede, but rather does it foster the immediate union of the faithful with Christ. (Lumen Gentium 60)

This maternity of Mary in the economy of grace began with the consent she gave in faith at the Annunciation and sustained without wavering beneath the cross; it lasts until the eternal fulfillment of all the elect. Taken up to heaven she did not lay aside this salvific duty, but by her constant intercession continued to bring us the gifts of eternal salvation. By her maternal charity, she cares for the brethren of her Son, who still journey on earth surrounded by dangers and difficulties, until they are led into the happiness of their Therefore the Blessed Virgin is invoked by the Church under the titles of Advocate, Auxiliatrix, Adjutrix, and Mediatrix. This, however, is to be so understood that it neither takes away from, nor adds anything to, the dignity and efficaciousness of Christ the one Mediator. For no creatures could ever be counted as equal with the incarnate Word and redeemer. (Lumen Gentium 62)