Why Devotion to Mary? A Jewish Convert’s Perspective, Part III 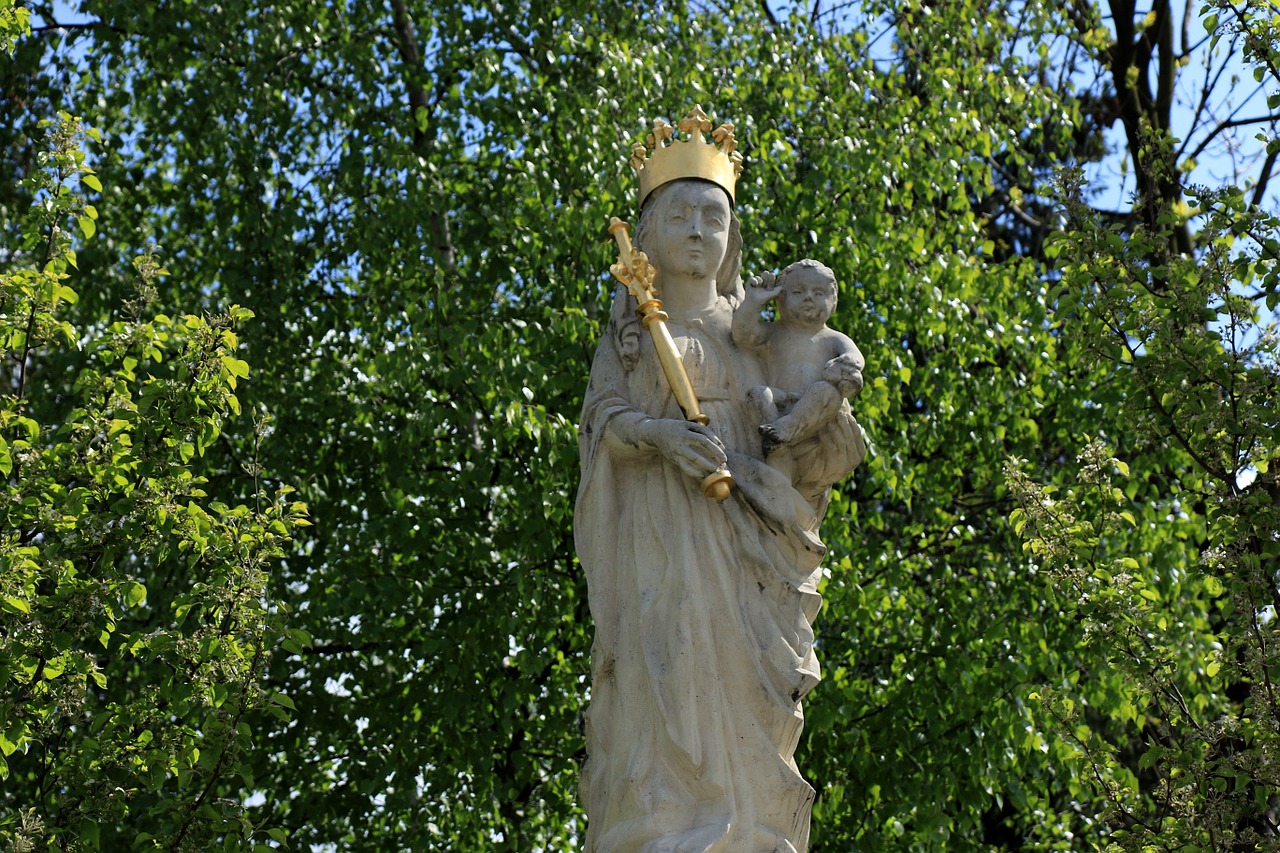 This article is part of an ongoing series. Part I Part II

I would like to briefly discuss the following Catholic teachings and in some cases defined doctrines concerning Mary: The Immaculate Conception, Ever-Virgin, Mother of God, the Assumption, and Mediatrix.

Most Christians accept that Mary conceived our Lord as a virgin. Matthew writes:

This is how Jesus Christ came to be born. His mother Mary was betrothed to Joseph; but before they came to live together she was found to be with child through the Holy Spirit. (Matthew 1:18)

The question for many is whether Mary remained a virgin all her life. In calling Mary “ever virgin,” Catholic Tradition is saying that after conceiving Jesus in virginity, Mary always remained a virgin, abstaining from all conjugal relations. This also implies that the birth of Jesus left intact the virginity of His Mother.

Most Protestants and many Catholics do not believe Mary remained a virgin after Jesus’ birth, and they usually cite Scripture for their reasons. The Catholic Church contends, however, that the Gospels furnish no argument against the teaching that Mary was “ever virgin.” Once again, my Jewish background helps me to see clearly the Church’s position, expressed in the following four points.

1. Jesus is called first-born, implying for many Christians that Mary had other children. First-born has a particular meaning for Jews. If a Jewish child is a boy and the first in the family, another ceremony follows a month after the birth. It is called Pidyon Haben, which literally means “to redeem the firstborn male.” According to biblical injunction, every firstborn male of the womb, whether human or animal, is considered as belonging especially to the Lord (Exodus 13:1–2). The Bible commanded that human beings were to be redeemed and clean animals sacrificed (Leviticus 27:26). In ancient times, the redemption consisted in the payment of five shekels, or their equivalent, to be made to a priest thirty days after the birth of the first son. Redemption was always considered to be a release from Temple service. This could mean acting as priest assistants, musicians, or servants in Jerusalem. The practice proved a hardship on many families; naturally, the parents did not want to part with their older children. Eventually, the tribe of Levi was set aside to serve in the Temple in place of the firstborn. A passage in the book of Numbers reads:

In accordance with this relaxation of the original laws, every firstborn male child has to be redeemed. This means he is freed from service at the Temple by the payment of five shekels to a Levite, who serves in his stead. Since Jesus was from the tribe of Judah, He had to go through the rite of redemption. St. Luke describes this rite, performed when Mary and Joseph presented Jesus in the Temple (Luke 2:22–24). Since I was the first-born in my family, I went through this rite 30 days after my birth. I was an only child. Yet I was still called first-born.

2. On several occasions, the Gospels speak of “brothers of Jesus.” For example, James and Joseph are named in Matthew 13:55. But these are sons of another Mary, expressly named “the mother of James and Joseph” in Matthew 27:56, who cannot be identified with the Mother of Jesus and who also is always named after Mary Magdalene. Besides, in the Semitic world, the name “brothers” often applies to relatives and confederates. Abraham says to his nephew Lot: “We are brothers” (Genesis 13:8).

Joseph had no relations with [Mary] at any time before she bore a son, Jesus. (1:25)

The Semitic locution “before…” or “until…” makes no judgment about the future. Thus:

Michal was childless until the day of her death. (2 Samuel 6:23)

I would find it hard to believe that Michal, the wife of king David, had children after she died.

4. The episode of the Finding in the Temple, and especially the episode on Calvary where Jesus entrusts His Mother to a disciple (John 19:25–27), seem to imply that Mary had no other children. But in any case, the ancient Tradition of Mary’s perpetual virginity was never historically questioned at a time when the memory of “brothers of Jesus” remained part of the vernacular.

The incident that most convinces me that Mary and Joseph continued to live in chastity after the birth of Jesus is the Annunciation. When the Angel Gabriel appeared to Mary and announced that she was to conceive a Son, who would be called the Son of the Most High, she responded,

Mary was betrothed to Joseph at the time. According to ancient custom, Jewish tradition includes two stages to matrimony. First come betrothal and then marriage. Betrothal, the ceremony by which a woman becomes engaged to the man who betroths her, binds her (from her side), in a union that culminates in marriage. She is forbidden to marry anyone else, unless her betrothed dies or divorces her. Why did Mary deem it necessary to remind Gabriel that she was a virgin? If Mary and Joseph had intended to live a normal married life according to Jewish custom, then Gabriel’s annunciation to her should have meant simply that after her marriage she would conceive naturally (i.e., Joseph would be the natural father). The child could still be called “Son of the Most High” because no one, not even Mary and Joseph, expected the Messiah to be God. Mary’s question to Gabriel only makes sense to me if Mary and Joseph had consecrated their lives to God and had intended to live chaste lives even after their marriage, because Mary intended to remain a virgin all of her life. That is why she could not understand how she was to conceive. I know this is hard for us to understand, in this sexually enlightened age, that a married couple could be so dedicated to God they would live together in chastity.

The belief in Mary’s perpetual virginity already appears widespread by the second century. Many of the early Church Fathers, such as Origen (died 254), Saints Ambrose, Jerome, and Augustine, strongly defended the virginity of Mary, before and after the birth of Jesus. Many Catholics are surprised to learn that leading Protestant reformers of the sixteenth century — Luther, Zwingli, and Calvin among them — asserted and preached Mary’s perpetual virginity.

The title “Mother of God” is not found as such in the writings of the New Testament. Yet Elizabeth, Mary’s cousin, calls Mary “the Mother of my Lord.” Yahweh, the name of God in Hebrew, is usually translated LORD in most English Bibles (except for the Jerusalem Bible, which maintains the Hebrew word). Jews never pronounced this divine name. It was used only once a year on the feast of Atonement or Yom Kippur, when the high priest entered the Holy of Holies in the Temple in Jerusalem (Leviticus 16). In the worship services in Orthodox synagogues, Adonai or “Our Lord” substitutes for Yahweh. One prayer that Jews recite during the daily and Sabbath services in the synagogue can be recognized by Catholics as the beginning of the Sanctus:

Holy, Holy, Holy is the Lord of hosts; the whole earth is full of your glory.

The last prayer a Jew should recite before death is called the great Shema:

Hear O Israel, the Lord our God, the Lord is One. (Deuteronomy 6:4)

As mentioned earlier, Mary, right after her conception, goes to visit and assist her cousin Elizabeth, who is six months pregnant. St. Luke, in his Gospel, gives us a vivid account of the arrival at Elizabeth’s house (Luke 1:39–58).

Now as soon as Elizabeth heard Mary’s greeting, the child leapt in her womb and Elizabeth was filled with the Holy Spirit. She gave a loud cry and said, “Of all women you are the most blessed, and blessed is the fruit of your womb. Why should I be honored with a visit from the mother of my Lord?” (Luke 1:41–43)

When a Jew uses the word Lord, she or he refers to God. Elizabeth, a Jew filled with the Holy Spirit, realizes that the Child in Mary’s womb is not just some human Messiah, but her Lord (God). In a sense we can say that Elizabeth was the first person to acknowledge our Blessed Mother Mary as the Mother of God.

The first known mention of the title Mother of God comes from St. Hippolytus of Rome (died ad 235). The Council of Ephesus (ad 431) condemned Nestorianism, which denied the unity of the divine and human natures in the Person of Christ. It also defined Theotokos (Bearer of God) as the title of Mary, Mother of the Son of God made Man. The Church explicitly promulgated as dogma the decision made at Ephesus in 431 by the Council of Chalcedon in 451. Vatican Council II states in Chapter 8 on the Constitution on the Church:

The reality of the Divine Motherhood explains the human and supernatural perfection of Mary. It is the only case in which a “Son” was able to “fashion” His Mother as He wanted her to be. This Son is all-powerful. He could not but prepare for Himself a Mother worthy of Him, a “worthy Mother of God,” totally devoted to her exceptional vocation: “Redeemed by reason of the merits of her Son and united to Him by a close and indissoluble tie, she is endowed with the high office and dignity of being the Mother of the Son of God and, in consequence, the beloved daughter of the Father and the temple of the Holy Spirit. Because of this sublime grace she far surpasses all creatures, both in heaven and earth. (Lumen Gentium 53)

Up Next: Why Devotion to Mary? A Jewish Convert’s Perspective, Part IV