A Baptist Minister’s Journey to the Eucharist
Part IV: The Bread of Life 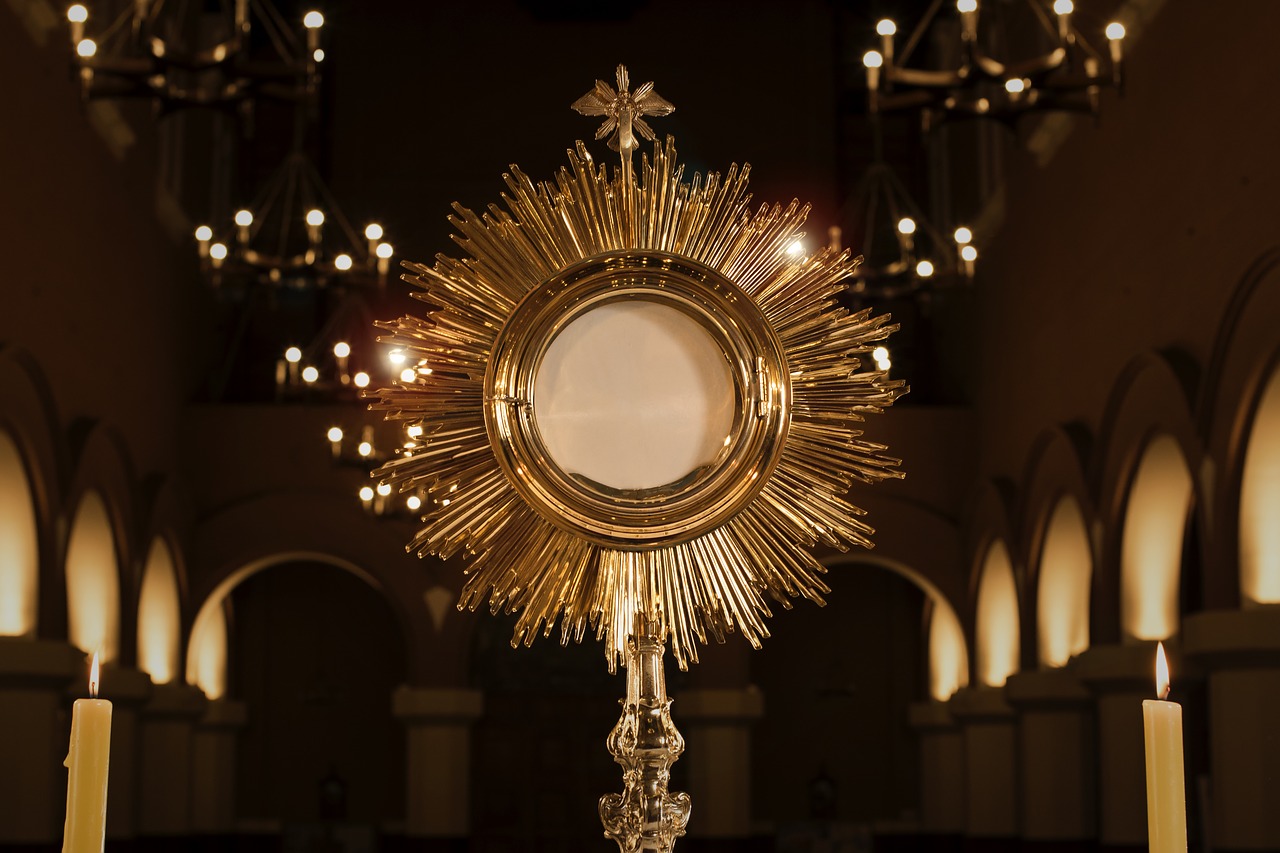 This is part of an ongoing series by Ken Hensley. Part I Part II Part III

In our last post we looked at the pattern of miraculous meals in Scripture. This is a theme that recurs throughout the Old Testament and continues into the New Testament as well.

In their wilderness wanderings, the Lord supplied the children of Israel with supernatural food and drink, sending manna from heaven every morning and causing water to spring up from a rock to satisfy their hunger and thirst (Exodus 1-17).

Elijah’s successor Elisha miraculously multiplied a few loaves to feed a hundred hungry disciples (2 Kings 4:42-44) and pulled supernatural strings to cause a widow’s “one little jar of oil” to somehow fill to overflowing as many large vessels as she could find (2 Kings 4:1-7).

According to the Apostle John, the first “sign” our Lord performed, manifesting his glory and causing his disciples to believe in him, was to turn water into wine (John 2:1-11).

And then, the final example recorded in all four Gospels, the high point of this biblical pattern, the greatest of all miraculous meals, when Jesus takes a few loaves and fish and multiplies them to feed thousands and thousands of men, women and children.

Or was it? Was the feeding of the multitudes the greatest of all miraculous meals, the high point in the development of this biblical pattern and theme?

The Catholic scholars I was reading insisted that it wasn’t. They said that the feeding of the multitudes was simply the greatest type, the greatest shadow, pointing forward to the culmination and fulfillment of the all the miraculous meals of Scripture: The Eucharist.

The Bread of Life Discourse

There’s no doubt that John 6:22-69 is one of the most important New Testament passages that Catholics, Orthodox, Anglicans and Lutherans point to when presenting a biblical case for the Real Presence of Christ in the Eucharist. Biblical scholars typically refer to this passage as the “Bread of Life Discourse.”

It just so happens to immediately follow John’s account of the feeding of the five thousand. Amazed at the miraculous meal Jesus has provided, the crowds want to take him by force and make him king. He withdrew to the hills alone, but word spreads of his location and the next day the crowds return, hungry and hoping that whatever he did the day before, he will do it again (John 6:14-24).

Jesus knows their hearts and encourages them to think about something more important than mere food and drink. “You seek me, not because you saw signs, but because you ate your fill of the loaves. Do not labor for the food which perishes, but for the food which endures to eternal life, which the Son of Man will give to you…” Jesus calls them to “believe” in him (vs. 25-29).

The response of the people is clever:

Fine. You want us to believe in you? You mention signs. OK, what sign will you perform so that we can believe in you? When our forefathers were starving in the wilderness, Moses was kind enough to give them bread from heaven. How about something along those lines?

But our Lord’s response is even more clever:

You just wait! The bread my Father is going to provide will make the manna look like the stalest of stale loaves! “The bread of God,” Jesus says, “is that which comes down from heaven and gives life to the world” (vs. 32-33).

The crowds are not sure what he’s saying, but they’re ready to listen: “Lord, give us this bread always” (vs. 34).

At this point, Jesus speaks the words no other religious figure in the history of the world has ever spoken or ever would have dared to speak: “I am the bread of life; he who comes to me shall not hunger, and he who believes in me shall never thirst” (John 6:35).

Now, as a Baptist, here is how I would have answered the Catholic who wished to argue that this passage in some way is looking forward to the Eucharist:

However, notice what Jesus says here in verse 35: “I am the bread of life; he who comes to me shall not hunger, and he who believes in me shall never thirst.” And recall how he answered when the people asked him, “What must we do to be doing the works of God?” His answer? “This is the work of God, that you believe in him whom he has sent” (vs. 29). And then what Jesus goes on to say in verse 40: “For this is the will of my Father, that everyone who sees the Son and believes in him should have eternal life; and I will raise him up at the last day.” And verse 47: “Truly, truly, I say to you, he who believes has eternal life.”

In other words, Jesus is speaking figuratively. All he means to say by calling himself the bread of life is that the Father has sent him to bring life to the world. To possess that life, we must see the Son, come to him and believe in him. That’s it.

This is exactly what I would have said. And if the Bread of Life Discourse ended with verse 29, or 35, or 40, or 47, this interpretation might seem to explain Jesus’ words and make perfect sense of them.

The problem is that the passage doesn’t end with these verses.

Instead, Jesus continues on to say many things. What Catholic apologists were pointing out (and I was listening with greater care at this point) is that when one listens carefully to what Jesus says in verses 48 – 69, and watches what Jesus does, the figurative interpretation begins to makes less and less sense.

It just doesn’t deal seriously with the whole of the passage.

What Jesus Says and Does

So what am I talking about?

Well, so far Jesus has revealed himself to be the bread of life sent down from the Father in heaven. Those who “come” to him and “believe” in him will never hunger or thirst but will have eternal life, because Jesus will raise them up on the last day.

Beginning around verse 48, however, Jesus begins to use language he hasn’t to this point. He identifies the living bread with his “flesh” and says that one must “eat” this bread to live forever.

I am the living bread which came down from heaven; if anyone eats of this bread, he will live forever; and the bread which I will give for the life of the world is my flesh (vs. 51).

Now, those listening pick up on this shift in expression and immediately begin to dispute among themselves: “How can this man give us his flesh to eat?” (vs. 52).

And what’s our Lord’s response? Does he explain that what he means by this is that they must “come to him” and “believe in him”? No. Instead, Jesus intensifies his language. He begins to insist—in the most literalistic and graphic of terms—that his listeners must “eat his flesh” and “drink his blood” if they would have life.

Jesus even switches from the more usual Greek verb for “eating” to use a word that means “to chew” or “to gnaw.” He repeats this particular verb four times in verses 54 through 58.

The repetition of this idea that his followers must eat, chew, gnaw upon his flesh and drink his blood is striking. It turns out that not only are the Jews in general offended and scandalized, so are his disciples. It sounds to them as though Jesus is commanding some form of cannibalism and the exact reverse of the Mosaic laws forbidding the eating of flesh with the blood.

And what does Jesus do? Again, does he explain that he has only been speaking “figuratively”? No. He lets them leave.

He even asks the twelve, “Will you also go away?” To which Peter famously responds, “Lord, to whom shall we go? You have the words of eternal life; and we have believed, and have come to know, that you are the Holy One of God” (vs. 67-69).

I had to admit it: This does not make sense—if all that Jesus meant was that his disciples must “come” to him and “believe” in him.

After all, Jesus’ disciples had already “come” to him and “believed” in him. And yet he allows “many” of them to draw back and “no longer” walk with him. He lets them go. In other words, this was the end of the road for a good number of his disciples.

Even the twelve, those who would become his Apostles, are on the verge of leaving, and it appears as though Jesus would have let them go as well!

It appears as though Jesus would have let everyone go! And all he had to do was say, “Hey, I’m only speaking figuratively”?

Baptists, Presbyterians and other Evangelicals all say that the figurative interpretation explains the passage.

Catholics say that in John chapter 6 Jesus is pointing forward to when, after suffering on the cross and ascending to heaven, he will give his body and blood as supernatural food and drink in the Eucharist; that this passage is pointing forward to the greatest miraculous meal of all, the feeding of the multitudes par excellence.

What other options are there? Assuming Jesus wasn’t teaching cannibalism, what options are there beyond his words being purely figurative and them indicating some means by which his disciples will have his glorified flesh and blood to eat and drink, some version of the Real Presence of Christ in the Eucharist?

At this point, there were several lines of thought converging in my head and moving me in direction of the Real Presence.

Stay tuned for the conclusion to the story.

Up Next: A Baptist Minister’s Journey to the Eucharist, Part V