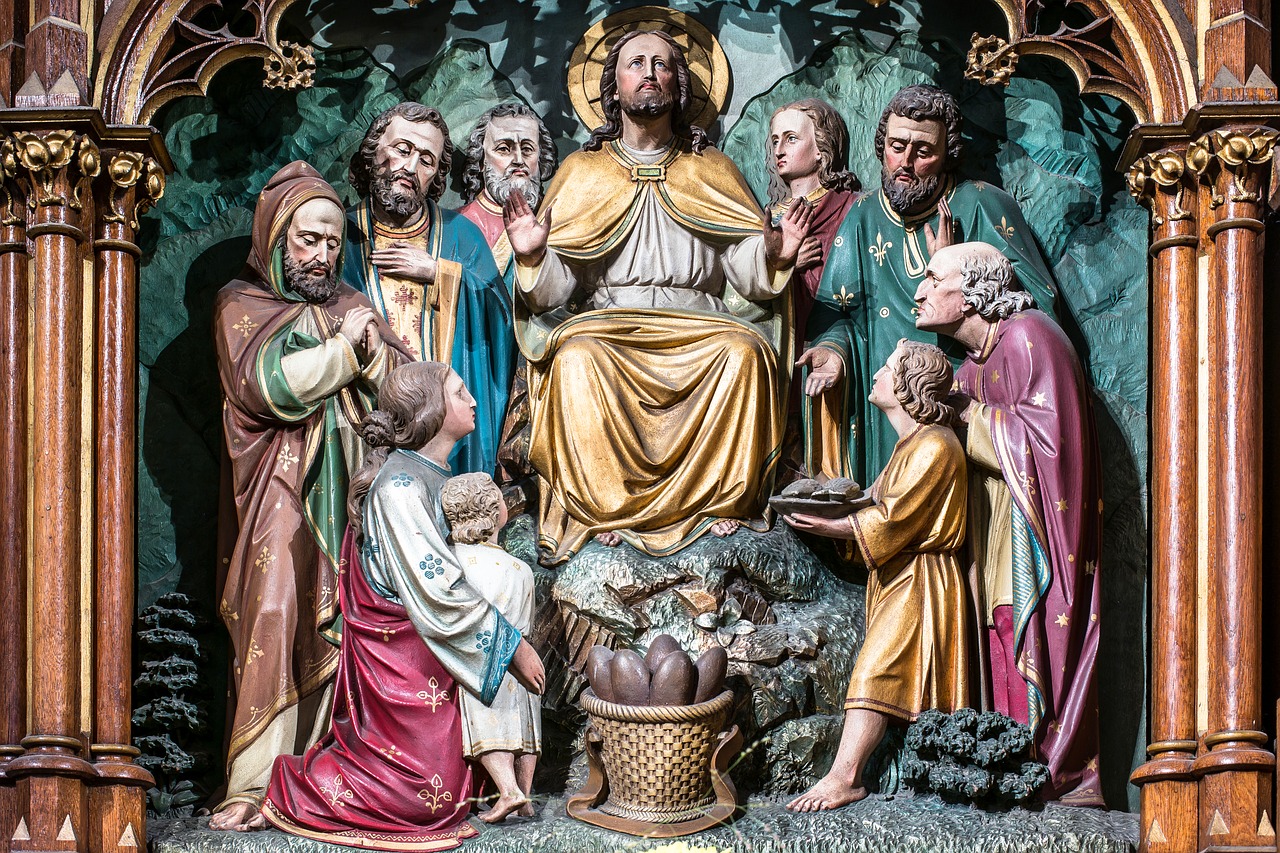 This is part of an ongoing series by Ken Hensley. Part I Part II

For not as common bread or common drink do we receive these; but since Jesus Christ our Savior was made incarnate by the word of God and had both flesh and blood for our salvation, so too, as we have been taught, the food that has been made into the Eucharist by the Eucharistic prayer set down by him, and by the change of which our blood and flesh is nurtured, is both the flesh and blood of that incarnated Jesus. – Justin Martyr

For them, it was a miraculous meal. St. Ignatius, bishop of the Church in Antioch, who as a young man had been personally instructed in the faith by the Apostle John speaks of the Eucharist as “the medicine of immortality.”

Discovering this was step one for me.

Step two was returning to the New Testament, re-examining everything the New Testament writers had to say about the Eucharist (or Lord’s Supper) and finding that it was entirely consistent with what the early Church seems to have believed.

Now, given my commitment at the time to the foundational Protestant principle of sola Scriptura—that we look to Scripture alone to authoritatively determine Christian doctrine—if I had discovered that the New Testament teaching on the Eucharist contradicted belief in the Real Presence, I might have been able to ignore what I had seen in the writings of the early Church Fathers. After all, it didn’t cross my mind back then to think that the faith of the early Church, as revealed in her doctrine, worship and practice, might provide compelling evidence of what the Apostles had actually taught their Christian communities.

But this didn’t happen.

I began by looking at the key passage on the topic in St. Paul’s writings: 1 Corinthians 10 and 11. Not only did I find nothing there that contradicted the “miraculous meal” conception of the early Church, there was at least one passage that seemed to lend positive support to the notion. I’m talking about 1 Corinthians 10:1-6, where the Apostle draws a direct line between the Eucharist and the supernatural food and drink provided the Israelites in their journey through the wilderness.

Although Paul’s message to the believers in Corinth is implied, it is nevertheless quite clear: The Israelites were baptized into Moses and received supernatural food and drink from God and yet did not make it to the Promised Land. You Corinthian Christians need to beware. You likewise may have been baptized into Jesus Christ. You may have received your own supernatural food and drink (the Eucharist!), but none of this guarantees that you will inherit the Promised Land of heaven if you choose to imitate the Israelites in their unbelief and disobedience.

It seems that when Paul thought about the Lord’s Supper, while he certainly thought about remembering Christ’s death and proclaiming it (1 Cor 11:23-26), he also thought about supernatural food and drink, manna falling from heaven to feed God’s people and water springing up from a rock to quench their thirst.

Miraculous Meals in the Old Testament

Now this whole concept was new to me.

It shouldn’t have been. After all, miraculous meals are a recurring theme in the Bible. Again and again, in both the Old and New Testaments, we find stories in which God’s people are fed through some supernatural means.

There’s the manna from heaven (Exodus 16) and water from the rock (Exodus 17). There’s the time when the Lord sent ravens to feed Elijah as he hiding in the wilderness (1 Kings 17).

And then there are a number of stories in which a small amount of food is miraculously multiplied to feed God’s people.

In 1 Kings 17, for instance, the prophet Elijah visits the home of a poor widow and her son. He says to her, “Make me something to eat!” She responds, “As the Lord lives, all I have is a little meal in my jar and a little oil in my vessel. I’m gathering some sticks right now to make something for me and my son before we die!”

Elijah instructs her to first make a cake and bring it to him and then to feed herself and her son, adding: “For thus says the Lord the God of Israel, ‘The jar of meal shall not be spent, and the vessel of oil shall not fail, until the day that the Lord sends rain upon the earth.’”

And it happened. Her little jar of meal and vessel of oil miraculously continued to produce until it was no longer needed.

In 2 Kings chapter 4 we find a similar account. This time it’s Elisha the prophet meeting a woman who explains that her husband has died, that she’s in tremendous debt, and that her two children are about to be sold as slaves to pay the debt. She informs Elisha that all she has to her name is “one little jar of oil.”

Elisha immediately instructs her to “Go and borrow empty vessels from all your neighbors. Find as many as you can and bring them here!” He then tells her to fill the vessels from her “one little jar.” Miraculously, the oil doesn’t stop flowing until she has filled every vessel to overflowing and run out of vessels to fill.

Later on in that same chapter of 2 Kings, another miraculous multiplication of food takes place.

In this case Elisha is sitting with one hundred of his disciples and they’re hungry. One of his servants has some loaves of barley and a few ears of grain. Here’s the passage:

And Elisha said, “Give to the men, that they may eat.” But his servant said, “How am I to set this before a hundred men?” So he repeated, “Give them to the men, that they may eat, for thus says the Lord, ‘They shall eat and have some left.’” So he set it before them. And they ate, and had some left, according to the word of the Lord  (2 Kings 4:42-44).

This is a recurring theme in the Old Testament and a theme that continues right on into the New Testament.

Miracle Meals in the New Testament

It’s hard to read the account of the woman who borrowed all the vessels from her neighbors and filled them to overflowing from her “one little jar” without being reminded of a similar miracle that would take place centuries later, this time at a wedding feast in Cana of Galilee, when Jesus would command the servants to bring six stone water jars each containing twenty or thirty gallons and “fill the jars with water” so that he might transform the water into wine.

It’s hard to read the account of Elisha multiplying the barley loaves and ears of grain to feed one hundred hungry disciples without thinking about the time Jesus took a few loaves and fish and multiplied them to feed thousands of men, women and children who had come to listen to him speak and had become hungry.

In fact, the parallels between these Old and New Testament stories are clear and fascinating.

Elijah has compassion on the poor starving widow and Elisha on his famished disciples. Likewise, when Jesus sees the crowds he says, “I have compassion for these people; they have already been with me three days and have nothing to eat; and I am unwilling to send them away hungry, lest they faint on the way” (Matt 15:32)

Elisha’s servant objects when the prophet suggests that he feed the men: “How am I to set this before a hundred men?” (2 Kings 4:43). Likewise, the disciples object when Jesus suggests that they feed the multitude: “Where are we to get bread enough in the desert to feed so great a crowd?” (Matt 15:33).

In the end, Elijah and Elisha take whatever small amount the people have and miraculously multiply it to meet the need. Jesus does the same: “’How many loaves do you have?’ Jesus asked. ‘Seven,’ they replied, ‘and a few small fish’ (Matt 15:34).

When our Lord changed water into wine and miraculously multiplied loaves and fish to feed the crowds, I’m convinced that he was consciously reenacting the miraculous meals of Moses, Elijah and Elisha, the greatest of the Old Testament prophets. Jesus was saying, “One greater than these has come!”

But was he also looking forward when he performed these miracles? Was the feeding of the multitudes the end of this Scriptural pattern of miraculous meals, or was there more to come? This is something St. Paul’s association of the Eucharist with supernatural food and drink made me wonder about. It’s something the early Church’s beliefs about the Eucharist made me wonder about. If anything was clear, it was that the early Church viewed the Eucharist as a miraculous meal.

As an Evangelical Protestant, when I thought about the Last Supper, two things primarily came to mind: the Passover and the institution of the New Covenant.

By choosing to share this Last Supper during the celebration of the Passover meal, Jesus was surely revealing himself to be the true Passover Lamb, whose death would free his people from their sins. “This is my body which is broken for you.”

But he was also announcing the institution of the New Covenant. In Exodus 24 Moses sprinkled blood on the altar on Mt. Sinai and instituted the Old Covenant with these words: “This is the blood of the covenant.” When Jesus raised the chalice at the Last Supper and said, “This is my blood of the covenant,” he was deliberately echoing Moses’ words. Jesus was announcing the institution of the New Covenant—this time in his own blood.

The Last Supper was patterned after these sacrificial meals. This much is clear.

But there seems to be more, here. The Last Supper also seems to be patterned after Jesus’ feeding of the multitudes.

Fine. So what? Well, it turns out that in every account of Jesus’ feeding of the multitudes—again, whether looking at Matthew, Mark or Luke—Jesus’ actions are described in exactly the same way—in fact, using the very same words.

Then he ordered the crowds to sit down on the grass; and taking the five loaves and the two fish he looked up to heaven, and blessed, and broke and gave the loaves to the disciples, and the disciples gave them to the crowds. And they all ate and were satisfied (Matt 14:19-20)

Here’s the point: It appears that Gospel authors have for some reason consciously patterned their description of the Last Supper in terms of Jesus’ feeding of the multitudes. The two events are being connected. Even the crowds being commanded to sit down on the grass is echoed in the disciplines reclining at the table.

Certainly, at this point, there were more questions than answers for this Baptist minister.

But the questions were provocative: Why did the Apostles draw this connection between the Last Supper and the feeding of the multitudes? Did they conceive of the Last Supper as some kind of meal in which a miracle was taking place?

And what about the Eucharist, to which the Last Supper points? From the earliest centuries of Christian history, the Eucharist was treated as the center of Christian worship and, essentially, as theNew Testament fulfillment of the miracle of the manna, the miracles of Elijah and Elisha, our Lord’s multiplication of the loaves and the fish. Is there truth to this? Is something happening in the Eucharist that is like what happened when Jesus fed the multitudes?

Is the Eucharist a miraculous meal?

Up Next: A Baptist Minister’s Journey to the Eucharist, Part IV