Luther: The Rest of the Story, Part II: The Road to Wittenberg 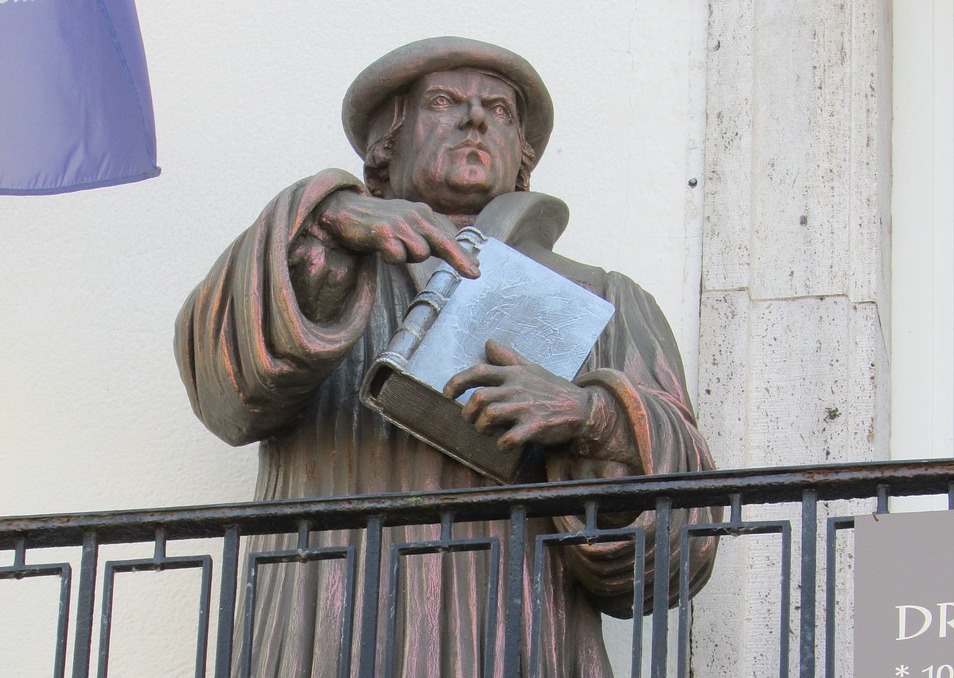 This is Part II of an ongoing series from Ken Hensley. Read Part I.

Although Martin Luther had become an Augustinian friar, then a Catholic priest, and later a doctor of Scripture and professor of biblical theology, he could not find peace in his relationship with God. Rather, Luther was a tormented soul, his mind filled with visions of a God he could never please, no matter how hard he tried.

And apparently, he tried!

In the monastery, Luther would fast for days without a crumb of food; in the dead of German winter, he would throw off the blankets from his bed and nearly freeze himself to death; he kept more and longer vigils than required — all in hopes that God would be pleased with him. “I was a good monk,” Luther later wrote,

I kept the rule of my order so strictly that I may say that if ever a monk got to heaven by his monkery, it was I. All my brothers in the monastery who knew me will bear me out. If I had kept on any longer, I should have killed myself with vigils, prayers, reading, and other work.

As I argued in Part I of this series, I have to believe Luther’s image of God as an impossible-to-please father was rooted, at least to some degree, in his relationship with his father.

Luther was ordained a priest on April 3 of 1507 at the Cathedral Church of St. Mary in Erfurt.

He had postponed the date of his first Mass so that his father, whom he hadn’t seen since entering the monastery, could be present. Hans, at least initially, did not disappoint. He arrived with 20 horsemen, bringing with him a generous gift for the monastery.

After the celebration of the Mass, Luther sat down to share a meal with his father and the other guests. “Dear father,” Luther looked across the table, “why were you so contrary to me becoming a monk? Perhaps you are still not satisfied. The life is so quiet and godly.”

He wasn’t prepared for what was to come. In front of his fellow monks and all the guests, Hans rebuked his son.

You learned scholar, have you never read in the Bible that you should honor your father and your mother? And here you have left me and your dear mother to look after ourselves in our old age.

Luther attempted a response: “But father, I could do you more good by prayers than if I had stayed in the world.” He went on to remind his dad of the call from God that had come to him that day in the storm on the road to Erfurt. But his father cut in: “God grant that it was not an apparition of the devil!”

This must have been devastating for young Martin. We know from many things he wrote that he always felt terrible that he’d disappointed his parents. Martin loved his father, and when he learned of his death some 25 years later, he shut himself away with the book of Psalms and wept for hours. In a letter to Melanchthon, he wrote, “My dear Philip. I have just heard that my father has died. Through him God gave me life. Through his sweat he raised me. I am too beaten to write any more.”

Luther loved his father. But he also struggled all of his life with the feeling that as a son he had been a great disappointment.

Of course the traditional Protestant interpretation of Luther’s struggle has tended to go something like this: It’s the Roman Catholic Church that made Luther the tormented soul of whom you speak!

After all, a Protestant might claim, doesn’t Catholicism teach people to view God as an angry father? Doesn’t the Church encourage people to think of their lives as lives of desperate “working” to earn salvation, to make themselves pure enough to be acceptable to God? If Luther struggled (so the argument goes) surely it was only because he was a sensitive and honest enough soul to see that he was not pure and would never be pure enough to “earn” eternal life. If Luther lived in dread of the judgment of God, it is simply because he took the teaching of the Catholic Church seriously!

No doubt you’re probably thinking: But that’s not what Catholics really believe! Catholics believe that salvation is the gracious gift of God. Yes, we must respond to that grace in faith and the obedience that flows from faith, but this isn’t the same thing as “working to earn salvation.”

Indeed, if Catholicism actually taught what most Protestants think it teaches, or at least taught at the time, how are we to explain all those in the Medieval Church who loved God and walked with God and did not see God as Luther saw Him?

I think about St. Bernard of Clairvaux’s treatise, On the Love of God, or the hymn attributed to him that begins: “Jesus, thou joy of loving hearts, thou Fount of life, thou light of men, from the best bliss that earth imparts, we turn unfilled to thee again.” It doesn’t seem as though St. Bernard could write about anything but the love of God!

What about St. Philip Neri, a contemporary of Luther, who was known for being filled continually with the happiness and joy of the Holy Spirit?

What about Sts. Francis and Clare and Thomas Aquinas? What about St. John of the Cross and St. Teresa of Avila? Apparently, not everyone viewed God as Luther did.

In fact, how do we explain Luther’s own confessor, Johann von Staupitz, vicar general of the Augustinian order at the time and Luther’s good friend and mentor? Staupitz seems to have been baffled by Luther’s inability to see God as a loving father and appears to have done everything he could to convince Martin of God’s love for him. On one occasion, he is known to have said to Luther, “Man, God is not angry with you. It is you who are angry with God! Don’t you know that God commands you to hope?”

And Luther was angry with God. Later in life, he wrote:

I was more than once driven to the very abyss of despair so that I wished I had never been created. Love God? I hated him!

Clearly, Luther had issues of his own.

In 1510, five years after entering the monastery, another lightning bolt struck in Luther’s life.

Luther had the privilege of being sent to Rome with another Augustinian friar on business for the order. And he was thrilled — not merely because he’d never been out of Germany, but because of the spiritual benefits he believed would be his as he walked the streets the great Apostles Peter and Paul had once walked, as he prayed and celebrated Mass in the churches of Rome, and as he viewed the holy relics of so many saints and martyrs.

With all this in mind, Luther set off for a month in the Eternal City. This was to be a turning point in his life. Reading from Heiko Oberman’s Luther: Man Between God and the Devil:

Luther was certain that he would be able to find salvation in abundance in the center of Christendom, and was thus determined to make the unique opportunities being afforded everywhere … But noticing how much blasphemous behavior went on in the holy city disturbed him deeply. Later he remembered clearly the shock and horror he had felt in Rome upon hearing for the first time in his life flagrant blasphemies being uttered in public. He was deeply shocked by the casual mockery of saints and everything he held sacred. He could not laugh when he heard priests joking about the sacrament of the Eucharist. In Erfurt his first Mass had set him shivering in awe. Now he had to stand by while servants of God thought it funny to blaspheme the most sacred words of institution. “Bread thou art and bread thou shalt remain! Wine thou art and wine thou shalt remain” …. “I was a serious and pious young monk,” Luther said, “who was pained by such words.”

Now, this is one of those points in the story of Martin Luther where Protestants become very excited and Catholics become very defensive and suspect that the level of decadence and evil in the Church’s leadership at the time is being exaggerated.

It may well be. I think it best, however, that we accept the fact that at this time Rome was not exactly a model of Christian spirituality. And Catholic writers at the time, and since, confirm this.

For instance, the priest Erasmus spoke of his own experiences in Rome:

With my own ears I heard the most loathsome blasphemies against Christ and his apostles. Many acquaintances of mine have heard priests of the curia uttering disgusting words so loudly, even during mass, that all around them could hear it.

(We think we hear some strange things in Mass!)

St. Ignatius of Loyola (1491-1556) the founder of the Jesuits, advised good Catholics against going to Rome, lest they be corrupted. Try to imagine Popes St. John Paul II or Benedict XVI or Francis saying, Whatever you do, unless you want your faith destroyed, don’t go to Rome!

There’s no good reason to doubt that Luther’s report of the situation in Rome was substantially true. What it led to in Luther’s life was a crisis of confidence in the Church’s divine authority.

This culminated in a particular event while climbing the Holy Stairs in Rome. Luther was on his knees ascending the steps Jesus is thought to have ascended during His trial with Pilate. He was praying an Our Father on each step, kissing the stones, and attempting to believe that what he was doing was assisting those in purgatory. As he reached the top his doubts overcame him and he thought to himself, “Who knows if it is really true?”

Under the Pear Tree

Luther returned to the monastery, still struggling, and now, for really the first time in his life, doubting that the Church had the answer.

Soon after, in the garden of the monastery, under a pear tree, Staupitz informed Luther that he wanted him to begin to study for his doctoral degree in Sacred Scripture and prepare to assume the chair of biblical theology at the University of Wittenberg.

As Roland Bainton, professor of ecclesiastical history at Yale University, tells the story, Luther gasped “and stammered out fifteen reasons why he could do nothing of the sort. The long and short of it was that so much work would kill him.”

To this, Staupitz famously replied, “Quite alright. God has plenty of work for clever men to do in heaven.”

Apparently, Staupitz hoped that for Luther, who was obviously extraordinarily bright, pouring himself into the study of Scripture might be just the thing to help him out of his depression.

And so, in 1513, having received his doctorate, Luther began lecturing at the University of Wittenberg. Between 1513 and 1517 he taught through the Psalms as well as St. Paul’s Epistles to the Romans and the Galatians.

It was during these years that Luther came to a view of the doctrine of justification — of how we are made right in the sight of God — that had never been taught in the history of Christian thought. This “discovery” would change his life forever and lead to his eventual break with the Catholic Church.

Up Next: Luther: The Rest of the Story, Part III