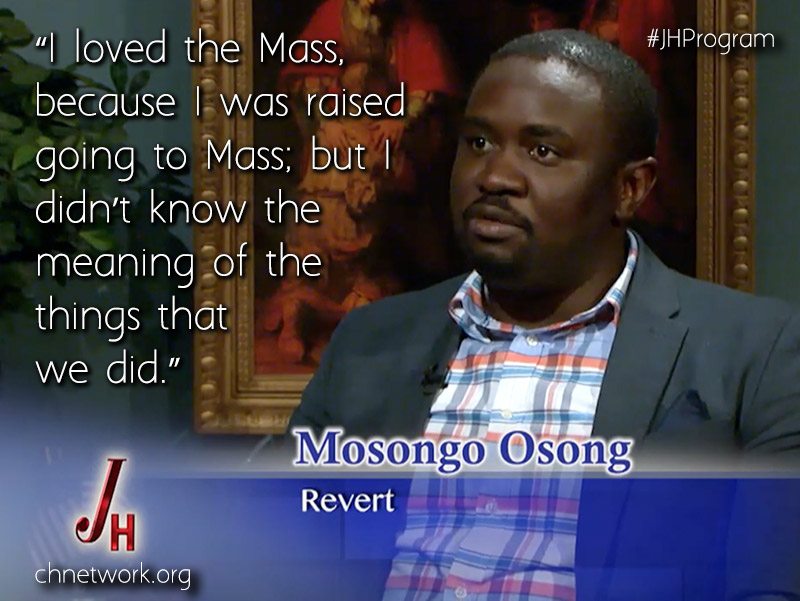 Here’s some of what went on with the Coming Home Network over the past week:

Mosongo Osong, creator of Biblezon, joined Marcus on The Journey Home to share his story of being an altar server in Cameroon before falling into a life of drugs and alcohol.  It was finally a tragedy during his time as a student in Washington DC that refocused his priorities on the faith of his youth.

In our Written Stories feature, former Seventh Day Adventist Brenda Caster revealed how questions about observing the Sabbath led her to research the historical foundations of Christianity, and to eventually understand that the Catholic Church was the Church founded by Jesus Christ.

We made available a 2006 Deep in History lecture with Fr. Dwight Longenecker, delivered before his ordination to the Catholic priesthood.  He covered the history of Catholicism in England, using his former country parish on the Isle of Wight as a starting point.

We also revisited a 1998 appearance of Catholic Answers apologist Tim Staples on The Journey Home, where he shared some of the objections he used to have regarding the Church’s teaching about Mary’s role in salvation history.

And Dr John Bergsma, Rhonda Ortiz and others weighed in on this week’s community members question: What was worship like in the early Church?

It was announced that Pope Francis will be delivering a video message to Together 2016, an ecumenical gathering on the National Mall in Washington DC which will also feature appearances from Josh McDowell, Francis Chan, Ravi Zacharias and others.

Religious rivalries were put aside as renovation on the Holy Sepulchre began this week.

And the Hollywood Reporter announced that Mel Gibson is planning to produce a sequel to The Passion of the Christ.