The Courage to Convert 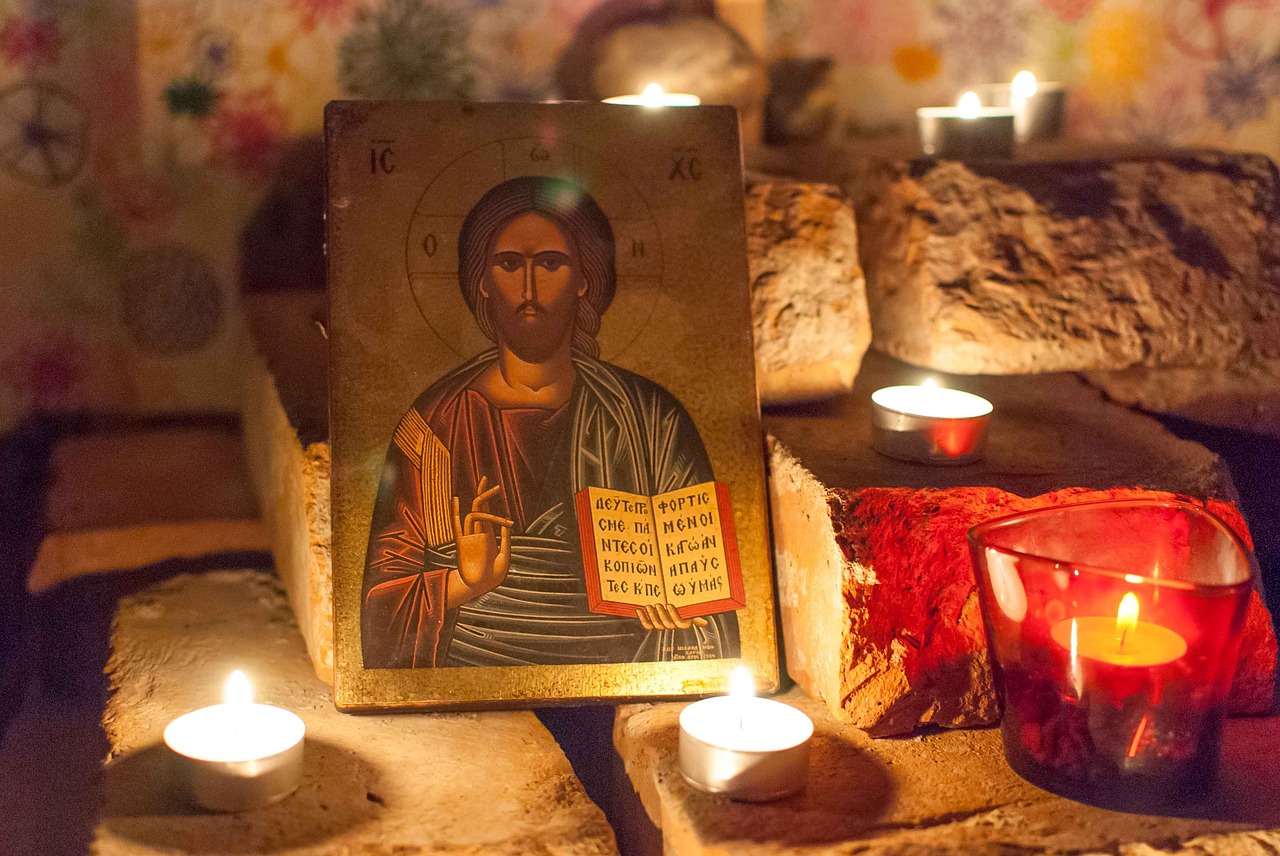 My earliest memory of church was from when I was in preschool in the mid-1980’s. My mom would drop me off at Sunday school at the local First Southern Baptist Church in Prescott Valley, AZ, while she attended the adult services. I don’t remember much from those days except for learning the song, “Yes, Jesus loves me, the Bible tells me so.” We did not stay at that church for long. My mom would take me church-hopping until she found one she was happy with. My dad did not come to church with us; he had left the Mormon Church as a teenager and was no longer religious. While trying different churches, I recall attending a local Pentecostal church where the congregation spoke in tongues and mumbled. People would make their way to the front and cry loudly, while the pastor would lay his hands on them and vehemently cast out demons. I was terrified! I thought, if that is what’s required to be close to God, I did not want any part of it.

My mom eventually settled on an Assemblies of God church. By then, I was tired of going with her on Sundays. I fought her every week. Sunday school was boring, and I did not see the point in going at all. Eventually, my mom stopped asking me to go with her.

In high school, around 1998, I began dating a Catholic boy. He was not on fire for his faith, but he did invite me to Mass once. It was totally different from anything I had experienced. Afterwards, he gave me one of the plastic rosaries they had laying out on the table in the back. I was not sure what to do with it, but it intrigued me. When I got home, I was excited to tell my mom about my experience. I thought she would be thrilled that I went to church. Her reaction was just the opposite: she was upset! She told me Catholicism was bad and unbiblical, that Catholics worshipped Mary and statues. She told me that it says in the Bible not to worship graven images. Her anger blindsided me. I had no idea what to say, so I dropped the conversation.

Fast forward to my early twenties. My mom invited me to attend a Foursquare church with her. I enjoyed the sermon, and the pastor and his wife were lovely people, so I attended there sporadically with my mom.

In 2004, at the age of 21, my boyfriend proposed, and we married at that church. It was a long-distance engagement, so marriage prep with the pastor was done individually. My fiancé was a believer, but he did not attend church. God was not a big part of our marriage. After almost two years of emotional and verbal abuse, that marriage came to an end.

So here I was, 23 years old and going through a divorce. I decided to live in Iowa with my best friend and her uncle. I would finish up my teaching degree while licking my divorce wounds. The divorce itself was ugly, and I had a few tough days. I was crying one day when my friend’s uncle came home from work. He presented me with a gold crucifix necklace and told me to lean on Jesus for help. He was not Catholic, but Lutheran. Regardless, his kindness touched me deeply.

For the next handful of years, church and religion again went by the wayside. I began my teaching career, giving no thought to God and his teachings. Around 2009, I reconnected with an old boyfriend, Kenny. We married in 2011, and I moved to New Mexico, where he was stationed in the Air Force. By 2012, I was pregnant with our daughter, Cameron. Being thankful for my part in bringing a new life into the world, I finally began to wonder about a higher power. Surely God had something to do with that.

I thought back to my experiences with my mom and her anger towards Catholicism. I contacted a Catholic friend of mine, Rachel, back in Arizona. I asked her why there was so much animosity towards Catholics. There are billions of Catholics; surely they can’t be all that bad? How can so many people be wrong in their beliefs? She chuckled and told me that Catholicism is extremely misunderstood. She recommended I do some research of my own. She suggested I read, Why Do Catholics Do That? by Kevin Orlin Johnson. That book was a turning point; it sparked a fire. It explained everything so concisely, with Scripture passages to back it up. There was a biblical explanation for everything from the crucifix, to genuflecting, to Mary, and it all made sense! I knew I had to learn more. For the next two years, I read tons of books and inundated Rachel with questions. Then I went back and reread that first book and highlighted, underlined, and dog-eared the pages.

In 2015, my husband left the Air Force, and we moved back home to Arizona. Rachel invited me to Mass at St. Germaine Catholic Parish. Although I could not keep up with all that was going on during the Mass, I enjoyed myself and continued to attend with her and her family.

Rachel gifted me a copy of Butler’s Lives of the Saints, by Bernard Bangley. Each day I would read about a new saint. The saint on October 12th was St. Cyprian of Carthage. Like me, he came to the Catholic Faith later in life. He devoured books by Christian writers and became a bishop. He guided his people with hundreds of letters, in which he explained the Faith. Something compelled me to learn more about that man. I found his complete works, and it took me a year to read them all. His treatises helped me decide to convert.

After I shared my decision with Rachel, she gave me the phone number of the RCIA instructor. I met with him and gave him a quick rundown on my background and why I wanted to be Catholic. (Because it’s the truth, and I could not deny the truth!) As the RCIA instructor was signing me up for class, he mentioned I may need an annulment. I thought, what is that? Come again? He explained that, since I had been divorced, I would need that marriage annulled and my current marriage recognized by the Church before I could become Catholic. He gave me a number for the deacon in charge of the Nullity Ministry. I was thoroughly confused.

He even agreed to have Cameron baptized Catholic. I invited my family and closest friends. Not surprisingly, when I invited my mom and her side of the family (grandparents, aunts, and uncles), all refused to attend. However, many of my friends, and even my father, came to support us when Cameron was baptized in August of 2017.

A few months later, I knew the time had come to tell my mom that I was converting. I took a deep breath and made the call. My confession was met with silence, then stuttering disbelief. She went on a tirade against Catholicism and its “evil ways.” I cried. We ended the conversation there, since continuing would accomplish nothing. My heart was broken. Was converting worth all of this? Was I doing the right thing?

Nearing the end of RCIA, and with the end of my annulment nowhere in sight, our class went on a spiritual retreat. I was feeling disheartened and unsure of my decision to become Catholic. I could not find solace in the Rosary, as so many had counseled. During the retreat, our class was told to disperse and have some quiet time. We were out in the wilderness, on a makeshift farm. There was a path leading away from the buildings, out into the trees and fields. Several of us made our way down the path in quiet contemplation. I had not gone far when I spotted a large rock. I sat down on the rock and proceeded to cry silently, asking God why I was feeling this way. Why all this turmoil? I closed my eyes and let the tears fall.

Then I opened my eyes and looked up. There, about ten feet in front of me was a horse. I had not heard it walking up to me. I looked around for my classmates but saw no one. I was completely alone. Then a second horse walked up and stopped behind the first one. Then a third horse came up behind the second one. All three were staring at me. We all stared at each other for a couple of minutes. My tears stopped, and I said hello. I felt calm. Finally, the horses slowly moved on. I looked all around me, expecting to see at least one other person, but no one was there. It was as if the Holy Trinity had come to ease my fears and confusion. As a result, to this day I have a special place in my heart for the Trinity.

Easter of 2018 came and went, with me watching my classmates getting baptized and confirmed without me. A few months later, in July, I finally received my annulment. I felt a weight had been lifted off my shoulders. However, Kenny’s annulment was still being processed. Still more waiting, with my patience growing thin. I continued to attend Mass in the meantime, anxiously for the day when I could finally receive Jesus in the Eucharist.

Later that week, my pastor called to let me know that I was all clear to be baptized at Easter Vigil. No convalidation was needed! My heart soared. On Easter Vigil, April 20, 2019, I was baptized and confirmed. I chose the confirmation name of Cyprian. St. Cyprian was a big part of my intellectual conversion. That evening, Rachel was there next to me, along with my dad, Kenny, Cameron, and several close friends. They had come to watch my years-long desire be realized. I was sad my mom was not there, but the topic of my faith is a toxic one between us. We have agreed to disagree on this point, and we do not discuss it.

Cameron had her first confession last year, and she is currently preparing for her First Communion and Confirmation. I am thankful that God has led me home and that I can help my daughter grow spiritually, as well. Kenny is not Catholic, nor is he interested in converting, but I believe there is still time for God’s grace to function in him. After all, it took God thirty-plus years to get my attention. Thanks be to God that He did.

Courtney Comstock is a former elementary school teacher and is currently an academic librarian. She was born and raised in Prescott, Arizona. Courtney has been married to her husband, Kenny, for over ten years. They have a beautiful, sassy eight-year-old girl named Cameron. She enjoys reading Catholic fiction and non-fiction, camping, hunting and cross stitch. Since becoming Catholic in 2019, Courtney has been involved in religious education and is currently a nullity minister at St. Germaine Catholic Parish in Prescott Valley, Arizona.