Smitten by Love at Mass 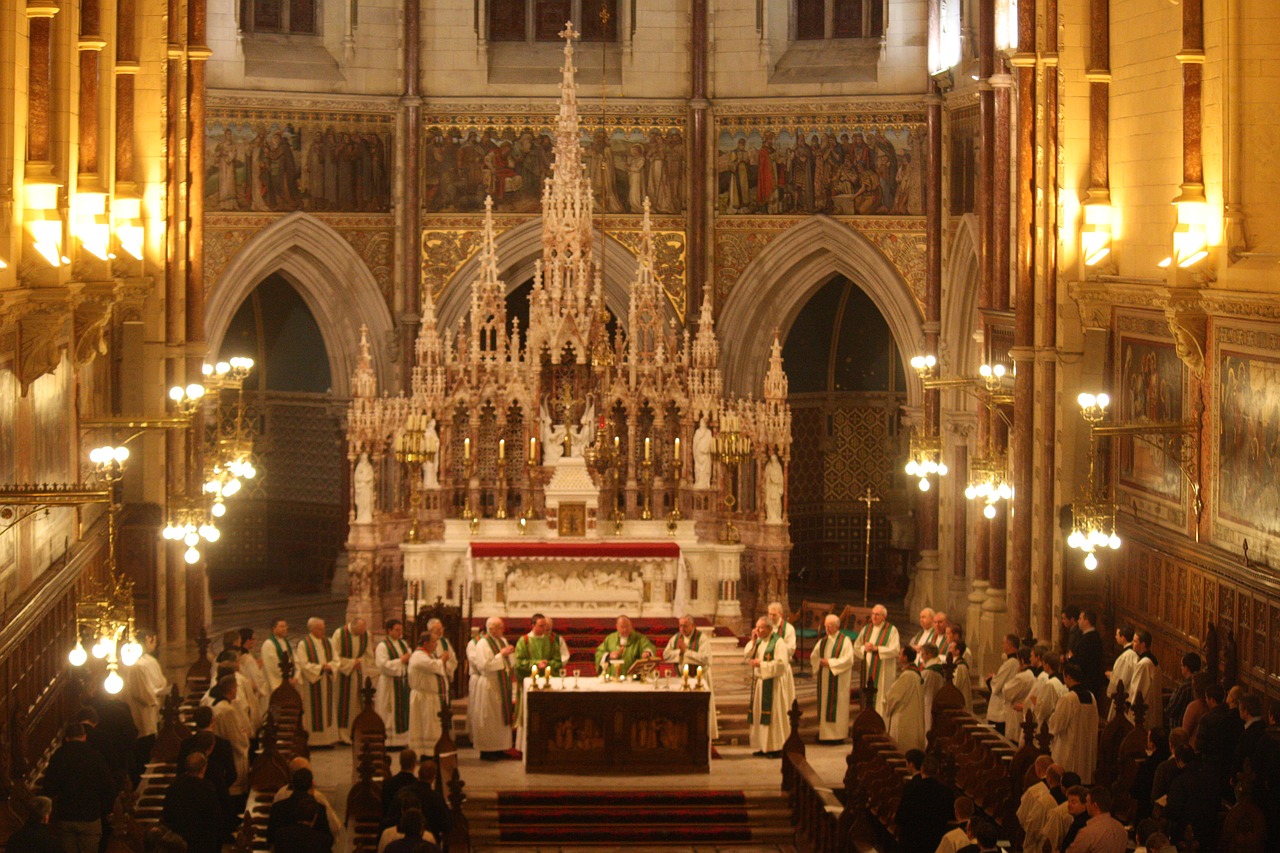 Telling my conversion story can sometimes feel like I’m attending some sort of “church-anonymous” meeting.

God, church, the Bible, and prayer have been a part of my life for as long as I can remember. Growing up, we went to church every week (sometimes twice in one week), read the Bible regularly, went to Bible studies, listened to Christian music, and prayed before every meal and every night before going to sleep. I knew deeply that God was real, that He loved me, and that He sent His Son to die on the cross for my sins. I knew that the Bible was the Word of God, and that it was very important to read it, know it, memorize it, and live it out. These truths were foundational. These truths were intimately woven into the very fiber of my being. These truths are still just as true for me today.

After spending quite a bit of time trying to figure out what I wanted to study, I found myself attending a private, Christian university in southern California. I graduated with a degree in Biblical Studies and Theology. I loved the Bible and had a special love for the Old Testament and Judaism; it’s interesting that Our Lord saw fit to have me marry a woman of Jewish descent. During my time there, I read, studied, wrote, read more, wrote more, studied more, and learned a ton about the Bible, about theology, about God, prayer, church, etc. And when I graduated, I had many theological views that were very different from when I started the program just a few years earlier. I certainly felt like I had this whole Biblical Studies thing figured out.

After getting married, starting a new job, moving a few times, and getting settled as an official adult, I found myself floundering a bit. Those firmly-held theological views I graduated with seemed to be growing less and less firm. We searched for the perfect church to plant roots in and even spent long periods of time not going to church at all. I started questioning certain beliefs, exploring other options, trying on different views like so many pairs of shoes. I still knew God existed, and I still believed that He loved me and sent His Son to die on the cross for my sins. I still thought the Bible was important to read, know, study, and memorize. I still thought prayer was good. These things just seemed to be less and less important in my daily life.

Life continued on and marriage continued on and marriage is wonderful and beautiful, but also hard and sometimes painful. And at a certain point, we were both feeling weary and distant from each other and from God. Without going into the gritty details (which would be quite another long story), we both started reading a devotional based on the writings of St. John of the Cross — a serendipitous, providential harbinger of a yet-unknown future.

Then, in 2016, as Christmas was approaching, we made the decision that we should attend the midnight Mass at the local Catholic parish. I’m still not quite sure why this idea would come into our heads. We had recently settled on a Protestant church to call “home” and had decided to really give it a go, but at 11:45 PM on Christmas Eve, we found ourselves parking and walking inside St. Paul the Apostle church. St. Paul: the man I had read about my whole life, the man after whom I was named. The man who received quite a surprise one fateful day. The man whose name means “small.”

We expected this Mass to be all candles and pews and hymns and poinsettias, but didn’t realize that 11:45 isn’t early enough to get a good seat. So instead of candles and pews, we found fluorescent lights and folding chairs, after being directed to a side room, since the main church was full. After seriously considering aborting this mission that we didn’t even fully understand, we took our seats toward the back, sat down, backs straight, and minds buzzing. We had no clue what to do or what to expect. We were on guard, because if all we had been taught about Catholics was true, we were probably going to be assaulted with some Mary stuff or some vain repetition and most certainly would be seeing some people trying to “work their way to heaven.”

And then the entrance procession began. In walked the altar servers carrying the incense, then the Deacon, carrying the Book of the Gospels aloft, evocative of the Jews processing with the Torah. The priest, alb and stole aflutter, came next, and for some reason, at that moment something inside me cracked. For the briefest of moments, it seemed like the ground shifted, or perhaps my heart shifted, and I felt like I had lost my footing somehow. Then the singing and the incense overwhelmed me, and for the next hour and a half, I was bouncing around inside myself, while at the same time being transfixed by all that was going on around me.

Three things happened internally during this Mass that still stand out to me today. I had three internal visions (what I would now describe as interior locutions). The first was an image of Jenna and me standing on the bow of a great ship. The seas were calm, the weather was sunny and warm, and while we stood looking around, I became aware of a very subtle breeze that shifted the direction of this ship very slightly.

Then, as we were kneeling in prayer, I saw us as if I were looking down on us from above. From our chests, I saw our hearts being drawn out toward the altar, bright gold, glowing and flaming, almost artistically painted. Thirdly, I was almost overwhelmed with how Jewish this all felt: the priest standing and representing God to the people, while at the same time presenting the people to God. The altar, the Tabernacle, the incense. This was like the Judaism that I had always been so enamored of, yet so much more. As all of this was going on, I also somehow knew without doubt that Jenna was experiencing something big and similar as well.

And then the priest was praying and saying words that I knew came from Scripture, and everyone was kneeling and had their heads bowed, but I couldn’t help watching the priest closely, because I knew that this part was important — and then:

Behold the Lamb of God. Behold Him Who takes away the sins of the world. Blessed are those called to the supper of the Lamb.

As the host was elevated, that small shift I had sensed earlier became like an earthquake. My heart broke open and my eyes exploded and while I saw that it was still the same host held in this man’s hands, it was no longer a piece of bread. I don’t know how, but I instantly knew more deeply and truly than I have ever known anything, that this was, in fact, Jesus Christ. I have never wanted anything more fully in my life. I wanted to lie down flat on my face in that fluorescent-lit room. I wanted to bum-rush the altar and consume Him. I wanted to stare at this strange, flat piece of bread until my last breath, while at the same time I felt like I couldn’t bear to look a moment longer. It felt like an eternity, and during this eternity, I realized that this whole Catholic “It’s not bread, it’s Jesus” thing was true. If this crazy thing was true (and let’s face it, this reality is insane in the most beautiful way possible), then all of it was true. I knelt in awe as these Catholics streamed forward toward the altar, that place of sacrifice, to the priest-who-represents-God, to receive Jesus, my Jesus. And echoing the words of the Prophet Isaiah, I was undone.

We left after Mass, and the next day was Christmas, so it was pretty busy and festive. It wasn’t until the following day that Jenna and I had a chance to talk. I was nervous, knowing I was going to have to tell her that I thought God wanted us to be Catholic. So I was quite surprised to find out that she had had a similar experience during Mass.

After over four hours of talking and crying and talking some more, we decided to go back to the same parish the following Sunday. And we did. Then we started RCIA. And eight months later, just three days before the Feast of the Assumption (which occurs annually on August 15), we were received into the one, holy, catholic, and apostolic Church. We stood before friends, family, and strangers and professed our belief in all that the Catholic Church teaches. As that lovely oil of unction ran down into our eyes, we walked toward the priest-who-represents-God and received the Creator of the Universe on our tongues.

We consumed Him Who had so consumed us.

This world is crazy and painful and scary and dark. The Church often times seems very similar. We can get caught up in debating and arguing and fighting uphill battles and get overwhelmed by confusing news and become discouraged at the current state of things. But in the midst of this chaos, God still speaks, priests still stand in persona Christi, Sacred Scripture still remains and lives are still changed by the overwhelming, never-ending, sacrificial love of God. This Church is the fullness of truth, beauty, and goodness and amidst scandal and heresy is still the bulwark and pillar of truth. May we never forget this. May we never forget the power of Our Lord in the Eucharist.

Paul de Partee has lived in Southern California his whole life. He grew up in a Protestant church and graduated from Biola University with a degree in Biblical Studies and Theology. He has been married to his beautiful wife, Jenna, for 10 years. They had the overwhelming joy of being received into the Catholic Church in August of 2017. Paul and Jenna live in Alhambra, California, where they are members of St. Thérèse parish. They love where they live and affectionately refer to their community as “Catholic Disneyland,” because they are literally surrounded by religious brothers and sisters, both Carmelite and Missionaries of Charity. Paul blogs at loveinthefield.wordpress.com.