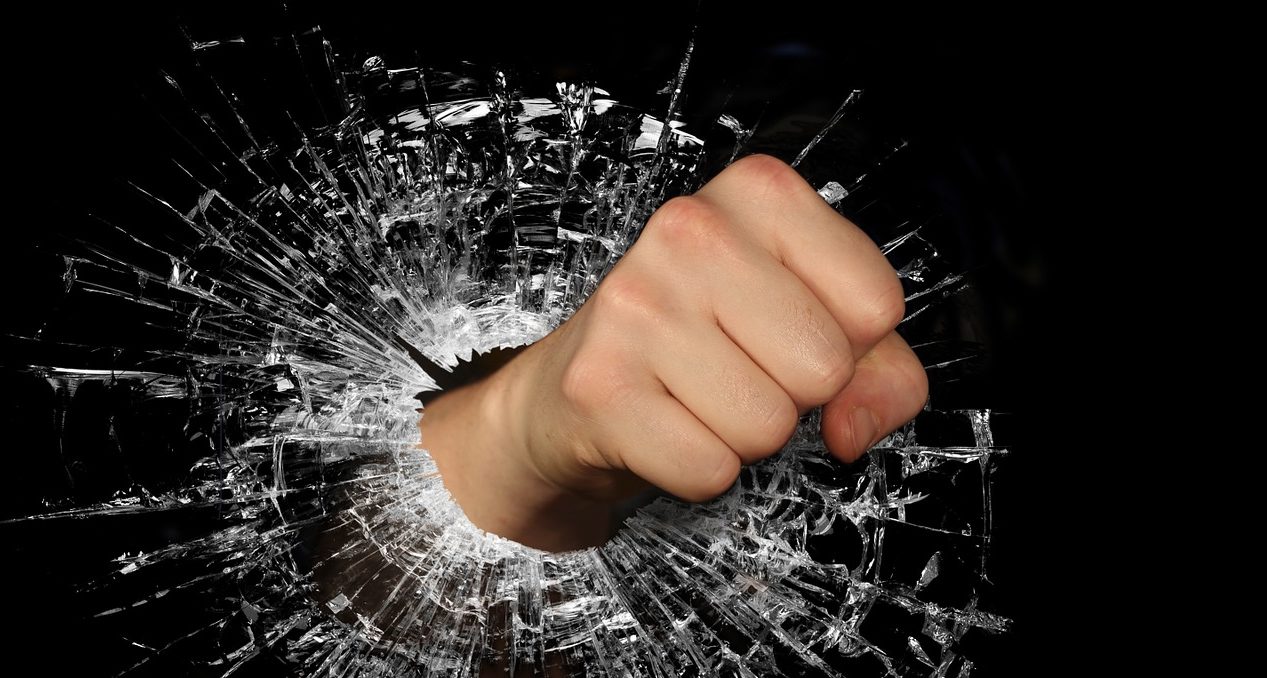 Bryan Mercier is a Catholic writer, speaker and apologist, online at catholicbryan.org.  His latest book is Why Do You Believe in God? Catholic Conversations with Skeptics and Non-Believers.  He spoke with The Coming Home Network about his troubled teenage years, and how his struggles with anger, and even temptations to violence, were overcome through a fresh discovery of his true worth in the eyes of a loving God.

Would you say you had a solid faith foundation in your childhood?

I grew up with faith.  My mom taught me to pray from the time I could talk.  My dad wasn’t a very nice guy at the time; he was very angry. It didn’t seem like he had much of a faith life.  I was often scared of his anger and his temper and felt safer with my mom.

Parents tend to rub off on kids, and it’s apparent now that in the long run, your mom’s faith rubbed off on you, but did your dad’s anger rub off as well?

I would say yes and yes.  My dad’s anger definitely rubbed off on me; I think when you’re in a family where your parents are fighting all the time, anger and depression are things that tend to follow.  I bore the brunt of my dad’s anger in my early years, because he babysat me while my mom worked.  He was verbally abusive, and sometimes hit me for little to no reason.  I think that I got more of that treatment than my older brothers and sisters, which led to more anger and more depression within me as I got into high school.

For a lot of us, it’s those high school years when we really start to express ourselves on these issues.  How did all of this manifest itself once you arrived at your teens?

That’s when it all hit home.  I went to a very abusive Catholic high school in Boston.  By abusive, I mean we were on the edge of the ‘combat zone,’ where all the gangs used to hang out.  It was a very tough area.  I was this 85-pound kid who wasn’t tough at all, so I was picked on, and bullied, and had a hard time fitting in.

I was transferred to another high school, but ended up getting picked on a lot there, too, for being the new kid. So it was about then that I began to experience major depression and sadness.  I always say that if you make fun of a kid who’s normal, they’ll probably become sad; if you bully a kid who’s already sad, they’ll become angry; and if you bully an angry kid, you may put them over the edge.  That’s the road I was going down.

If you had met me back then, you would have seen a paradox; on the one hand, you’d see a nice kid who wouldn’t hurt anyone, and enjoyed being around his friends, but on the other hand, outside of school, you might see me dressed all in black, carrying weapons, looking for a fight, wanting to hurt people.  Sometimes I’d go sit down next to the train tracks and let the train go by six inches from my head.  These are the kinds of things I’d do to numb the pain that I kept trying to ignore.

I used to throw darts in our attic, and I’d even paste the pictures of the people I hated from high school up on the dartboard.  All this is a pretty clear indication of the kind of anger that was welling up in me.  For years, I didn’t even want to look in the mirror, because I hated what I saw there.  I thought I was the ugliest person on planet earth.  I had rock bottom self-esteem.  I desperately needed to be loved.

Was music an outlet at all for you?

It was, and it was helpful in some ways, but the lyrics of the stuff I was listening to only fed into my anger and sadness.  The biggest outlet for me was my friends — just playing video games with them, and hanging out with them, was a way for me to forget how depressed I became when I was alone.  It was when I was at home, in the silence, that dissatisfaction with life would really get to me.

Were any of these thoughts you had suicidal in nature?

That’s a strange question, and it comes up a lot when I give retreat talks.  Teens often ask me if I was ever suicidal, and I say no — I wasn’t the one who had hurt myself, it was everyone else who had hurt me.  If I was going to hurt anyone, it was going to be someone else.

That idea of hurting other people started to fill up my head.  I started writing poetry where I’d be hurting people, and even killing people.  My friends read some of my poems, and they were shocked at how graphic the violence was.  I suppose if I were to write that kind of stuff today, people might recommend me to a psychiatrist, or call the authorities.

I don’t think I would have gone through with any of it, because I feared two things: my dad and hell.  In that sense, I guess religion was working on me, because it kept me from doing terrible things.  I didn’t want to go to hell, and I knew that there would be repercussions if I did the things I was writing about.  And I wasn’t a mean kid; I just had a lot of anger that I didn’t know how to get rid of in a constructive way.

Obviously fear, if it’s your primary motivating factor, doesn’t get you very far in faith.  How were you able to move from fear to love when it came to your relationship with God?

It happened through coming to know who God is.  I had a lot of misconceptions about Him. I thought He was angry and vengeful, and if I ticked him off, He’d be ready in an instant to send me to hell.

College was when this changed for me.  I ended up going to Franciscan University, and it was there that I had a very powerful experience of the God of the universe that completely changed my life.  Some of this happened over time.  Being on a campus like Franciscan, where people are constantly reinforcing to you that God loves you, was huge for me.  You were on a campus where it was normal for students to smile at one another, and actually hug one another.  It was the complete opposite of my experience in high school.

But there was also a specific moment where I felt the love of God break through my defenses.  I had prayed my whole life for God to change my heart, and He never had — and I realized that it was because my life was full of anger and depression. He wanted to come into my life, but I hadn’t left any room for Him.  At Franciscan, I’d been praying a lot more, going to Mass more, and going to Confession, and starting to make more room in my heart for the Holy Spirit to move in.

At this time, the faith life on campus was a mix of charismatic students and more traditional students. I was completely against the charismatic stuff; I couldn’t relate to it at all.  I couldn’t understand it, and some of it even seemed disrespectful to me.

Then, one day, when I was at Mass, I felt really strongly that God was calling me to put my hands in the air.  Being the more traditionally inclined person that I was, I told him “no.”  I was in the 5th pew from the front, and it was while we were singing the Gloria.  The feeling that I should be putting my hands up in praise to God kept getting stronger, so I thought fine, I’ll give this a chance.  I put my hands up, just a little — not all the way, I didn’t want to be like the “weirdos” around me — and in doing that, I felt as though in that moment, I was actively surrendering to God.

It might be like if someone came and stuck a gun in your back, and you were to say, “I surrender.”  Except for me, it was God asking, and He wanted me, of my own free will, to surrender all my pain, all my problems, all my anger, all my depression, everything.  He wanted me to give it all to Him, because it wasn’t His plan for me to live that way.

This feeling of total surrender hit me hard.  I felt like an 18-wheeler had plowed into me at 55 miles per hour.  I felt like God was offering me all the happiness and fulfillment in the world, if I wanted it.  And I remember specifically those four words: if I wanted it.

There are some outside the Catholic Church who see the liturgy of the Mass as too rigid, too scripted — that it doesn’t allow for the movement of the Holy Spirit.  How significant was it that this moment of divine love washed over you in the context of Mass?

It’s very significant.  I’d had experiences of God at Franciscan outside of the Mass, at their Eucharistic Festivals of Praise.  But it was interesting that He chose the Mass — the source and summit of our faith — to completely change my life.  I don’t even remember what happened for about five minutes, but when I came back around, it was a totally different part of the Mass.

In that moment, I knew God was real.  He wasn’t a theory for me anymore.  I didn’t know of  Him anymore, I knew Him.  And that understanding of Him hit me during the Mass.  Really, if we’re bored at Mass, it’s not the Mass that’s boring — it’s us.  The Mass is a prayer, and if we don’t have a prayer life outside of it, we’ll have a hard time praying when we’re in the midst of it.

Over the next year or so, God gave me a new heart, and a new mind.  He rooted out all of my hatred, and replaced it with overflowing love.  He took away my confusion, and gave me peace. My darkness became light.  He gave me the desire to share that experience of joy and peace with as many people as possible through the ministry I now have, because His love changed my life, and I want everyone to know that it’s available to them, too.

The human need for love seems to be a thread that runs through your whole story.

Yes, and I think that’s the outstanding point.  You can know all the arguments for the existence of God and still be far from Him.  I find that, when I travel, doing parish missions and retreats as part of my ministry, I have to share the tremendous love of God, because that’s what people are starving for.  Some of us hear from the time that we’re little that God loves us, but until we encounter that love for ourselves in a real way, it won’t mean anything to us.  It’s the personal encounter with that love that has led me to want to share that gift with everyone I come in contact with.