[1]When the day of Pentecost had come, they were all together in one place. [2] And suddenly a sound came from heaven like the rush of a mighty wind, and it filled all the house where they were sitting. [3] And there appeared to them tongues as of fire, distributed and resting on each one of them. [4] And they were all filled with the Holy Spirit and began to speak in other tongues, as the Spirit gave them utterance. [5]Now there were dwelling in Jerusalem Jews, devout men from every nation under heaven. [6] And at this sound the multitude came together, and they were bewildered, because each one heard them speaking in his own language. [7] And they were amazed and wondered, saying, “Are not all these who are speaking Galileans? [8] And how is it that we hear, each of us in his own native language? [9] Par’thians and Medes and E’lamites and residents of Mesopota’mia, Judea and Cappado’cia, Pontus and Asia, [10] Phryg’ia and Pamphyl’ia, Egypt and the parts of Libya belonging to Cyre’ne, and visitors from Rome, both Jews and proselytes, [11] Cretans and Arabians, we hear them telling in our own tongues the mighty works of God.” [12] And all were amazed and perplexed, saying to one another, “What does this mean?” [13] But others mocking said, “They are filled with new wine.” 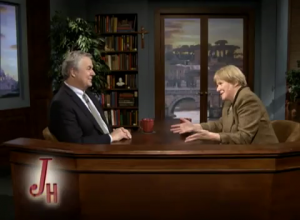 0 Shares Share Deep in Scripture 2012 No Comments
Are you a convert or considering joining the Catholic Church? Subscribe to Our Newsletter