“GOD SO LOVED THE WORLD”…THAT HE NOT ONLY REVEALED HIMSELF TO MANKIND, BUT HE GAVE MANKIND THE FREEDOM TO RESPOND. 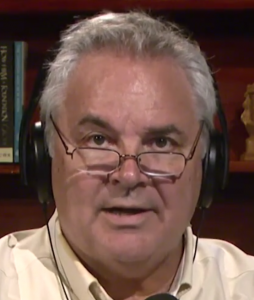 Every single human being has been created in the image of God, and, through the death and resurrection of Christ, has been redeemed. Every person has within their conscience a desire for God, or as St. Augustine put it, “Our hearts are restless until they find their rest in Thee.”

In His love, God has revealed Himself to humanity in three ways: (1) through HIs creation; (2) to His chosen people Israel; and (3) through the Gospel. In Romans 1:16-21, which we discussed last week, we see that because of these revelations, mankind is without excuse. As St. Paul wrote in verse 21: “So they are without excuse, for although they knew God they did not honor him as God or give thanks to him, but they became futile in their thinking and their senseless minds were darkened.”

Today we will continue this discussion to see in more detail what has happened as a result of this.

Last week you passed quickly by this verse: “For the wrath of God is revealed from heaven against all ungodliness and wickedness of men who by their wickedness suppress the truth. For what can be known about God is plain to them, because God has shown it to them.” This was in the context of God making Himself clearly knowable through His creation. Does this mean, therefore, that unevangelized primitives, like native American Indians, have reaped the wrath of God for their immoral behavior, even though they had never heard of the Ten Commandments or the Gospel?

(A) INSTEAD OF LOVING GOD, MANKIND MADE FOR HIMSELF GODS:

22: Claiming to be wise, they became fools,

23: and exchanged the glory of the immortal God

for images resembling mortal man or birds or animals or reptiles.

(B) AS A RESULT, GOD LET MANKIND REAP THE REWARDS OF THEIR FOLLY:

(I) THE LUSTS OF THEIR HEARTS TO IMPURITY:

24: Therefore God gave them up in the lusts of their hearts to impurity,

to the dishonoring of their bodies among themselves,

25: because they exchanged the truth about God for a lie

and worshiped and served the creature rather than the Creator,

who is blessed for ever! Amen.

26: For this reason God gave them up to dishonorable passions.

27: and the men likewise gave up natural relations with women

and were consumed with passion for one another,

and receiving in their own persons the due penalty for their error.

(III) TO A BASE MIND AND TO IMPROPER CONDUCT:

28: And since they did not see fit to acknowledge God,

God gave them up to a base mind and to improper conduct.

29: They were filled with all manner of wickedness,

[30]they are gossips, slanderers, haters of God, insolent, haughty, boastful, inventors of evil, disobedient to parents,

32: Though they know God’s decree

that those who do such things deserve to die,

they not only do them

but approve those who practice them.

“But understand this, that in the last days there will come times of stress. For men will be lovers of self, lovers of money, proud, arrogant, abusive, disobedient to their parents, ungrateful, unholy, inhuman, implacable, slanderers, profligates, fierce, haters of good, treacherous, reckless, swollen with conceit, lovers of pleasure rather than lovers of God, holding the form of religion but denying the power of it. Avoid such people.”

(C) YET, WE MUST BE CAREFUL IN OUR JUDGEMENT OF OTHERS:

1: Therefore you have no excuse, O man, whoever you are, when you judge another;

for in passing judgment upon him you condemn yourself,

because you, the judge, are doing the very same things.

2: We know that the judgment of God rightly falls upon those who do such things.

that when you judge those who do such things and yet do them yourself,

you will escape the judgment of God?

4: Or do you presume upon the riches of his kindness and forbearance and patience?

Do you not know that God’s kindness is meant to lead you to repentance?

5: But by your hard and impenitent heart

when God’s righteous judgment will be revealed.

6: For he will render to every man according to his works:

7: (a) to those who by patience in well-doing seek for glory and honor and immortality,

he will give eternal life;

8: (b) but for those who are factious and do not obey the truth, but obey wickedness,

there will be wrath and fury.

0 Shares Share Deep in Scripture 2014, Uncategorized No Comments
Are you a convert or considering joining the Catholic Church? Join Our Online Community