The CHNetwork Family Reflects on the Passing of Pope Benedict XVI 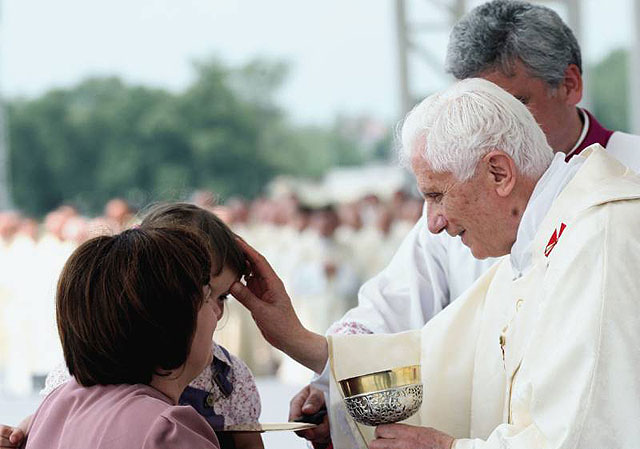 The Coming Home Network joins with our family of faith in celebrating the life of Pope Emeritus Benedict XVI and in praying for the repose of his soul. Before, during, and after his pontificate, he has been someone close to the heart of CHNetwork’s mission of sharing the truth and beauty of the Catholic Church and inviting people to make the journey home.

Countless members of The Coming Home Network have found themselves inspired by the life and witness of the late Holy Father, through his many addresses and writings, the clarity of his teaching, and his obvious love for Jesus Christ, which he shared so often from the world’s biggest pulpit.

But for some members, the connection to the man born Josef Ratzinger has been significantly more direct.

CHNetwork’s former chaplain, the late Fr. Ray Ryland, spent many years as an Episcopal priest before he and his wife felt convicted to come home to the Catholic Church in 1963. At that time, there was no path for someone like him, a married clergyman from a Protestant denomination, to become a Catholic priest. That changed in 1980, when Pope St. John Paul II established the Pastoral Provision, which opened the door for some Protestant clergy to be considered for the Catholic priesthood.

Fr. Ryland, who at that point had been a layman for two decades, leapt at the opportunity.

As he put it, “My application was the first to be sent to Rome, though it was not the first one acted on. Thirteen months later, my bishop received a letter from then-Cardinal Joseph Ratzinger (the future Pope Benedict XVI), telling him the Holy Father had approved my being ordained. Several months later, after a series of written and oral exams, I was ordained to the priesthood. That was in 1983.” Fr. Ryland would continue to serve as a Catholic priest until his passing in 2014.

In 2009, the ground laid by the Pastoral Provision would bear new fruit with the issuance of Anglicanorum Coetibus, in which, as Pope, Benedict XVI created a pathway that would enable groups of believers from Anglican traditions to enter into full communion with the Catholic Church while preserving elements of their patrimony. Liturgically, this meant approval of the Anglican Use of the Roman Rite. Ecclesiastically, it meant the need for leaders to act as ordinaries for the various regions of the world where Ordinariates were being established.

In North America that call came for current CHNetwork Chaplain Msgr. Jeffrey Steenson, who, as an Episcopalian, had served as bishop of the Episcopal Diocese of the Rio Grande.

Steenson had first met Cardinal Ratzinger in 1993, while Ratzinger was head of the Congregation for the Doctrine of the Faith, and Steenson was part of a delegation of Episcopalian clergy seeing reunion with the Catholic Church, a meeting that would serve as groundwork for Anglicanorum Coetibus. It was fitting, then, that Steenson was called upon to be the first ordinary of the Personal Ordinariate of the Chair of St. Peter, overseeing its presence in the U.S. and Canada from 2012 to 2015.

Many have come to view Anglicanorum Coetibus as the most significant step toward healing between Catholics and Anglicans since the English Reformation began under Henry VIII in 1534. Msgr. Steenson sees it as evidence of the brilliant theological mind of the late Holy Father, and a reflection of his commitment to Christian unity. “I think of Pope Benedict XVI as a real doctor of the Church,” reflected Steenson, “and I pray that someday he will be declared one.”

Despite the measures established by the Pastoral Provision and the Personal Ordinariate, there is no guarantee that an Anglican priest who becomes Catholic will be ordained a Catholic priest. Many of them remain laity after becoming Catholic, finding other ways to be involved in the Church.

But for some, the transition, once formally approved, can move ahead fairly quickly. Fr. Jurgen Liias, a CHNetwork member who was an Episcopal priest for 40 years before becoming Catholic, was one such case.

As he recalls: “At noon on August 15, 2012, the Feast of the Assumption of the Blessed Virgin Mary, after forty years, I officially resigned my Anglican Priestly Orders; at 6 p.m. of that day I was confirmed and received into the Catholic Church. In February 2013, I received word that I had been approved for ordination.”

Fr. Liias would end up being the last applicant approved for priesthood through the Personal Ordinariate during the pontificate of Benedict XVI.

A Shepherd Who Led With Humility

Marcus Grodi, Founder and President of The Coming Home Network, remembers fondly that despite fears from some that Benedict would be merely a doctrinal enforcer, there was a gentleness and humility that accompanied his office, and his clarity and charity caused many to consider engaging the teachings of the Church. “So many warned that he was going to be a Rottweiler,” Grodi said, “but he always exuded the joy of knowing Jesus Christ.” Grodi expressed gratitude for the late Holy Father’s commitment to “ground(ing) the call to the new evangelization in solid theological and doctrinal principles.”

That commitment and witness would be compelling to many non-Catholic Christians from the first moments of Benedict’s pontificate.

As a former Baptist and the daughter of a preacher, CHNetwork member Becky Mayhew had been struggling for years to find a spiritual home and wrestling with the nature of Christian authority. She’d recently begun looking into Catholicism when Cardinal Ratzinger was elected to the papacy, and it was a watershed moment for her. As she put it, “When Pope Benedict XVI stood on the balcony for the first time in 2005, the Holy Spirit delivered an unspoken message to me: ‘This is the leader of the Church.'” Mayhew would end up receiving Confirmation in 2007.

Denise Bossert, another Protestant “preacher’s kid,” came into the Catholic Church just four months after Pope Benedict XVI was elected on April 19, 2005. She reflects back on the leader of her newfound Church family and two words come to mind: faithfulness and humility. And when he stepped down eight years later, those two qualities were again on full display.

“He set an example for us in his faithfulness to Christ and His Church, and He followed our Lord in humility, setting aside the glory of his election to the papacy for a quiet life of intercessory prayer on behalf of the Church,” Bossert said.

A Joyful Witness to Jesus Christ

JonMarc Grodi, Executive Director of The Coming Home Network, saw in Pope Benedict a man who was never afraid to engage with the world. “He inspired a renewed confidence that the ancient faith can speak clearly and reasonably to the problems and concerns of the present day,” JonMarc observed. That willingness to follow the truth, even if it takes us into uncomfortable conversations, is a quality common to many inquirers seeking a home in the Catholic Church.

For many Christians viewing Catholicism from the outside, there can be a presumption that Catholics have a low view of Sacred Scripture. Even a casual reading of Benedict’s scholarly and devotional legacy easily lays that myth to rest.

“Many who reach out to the Coming Home Network come from Christian traditions where there is tremendous love for Scripture and where Catholicism is often viewed as caring more about ritual and tradition,” said Ken Hensley, a former Baptist pastor who serves as Director of Pastoral Care for CHNetwork. “Having a world-class biblical scholar as pope, a man who loved Jesus Christ and loved the study of Scripture, was a great support to our apostolate.”

The late Holy Father’s love of Scripture was perhaps most notably evident in his three volume Jesus of Nazareth series, which he referred to as an “expression of his personal search for the face of the Lord.” These books gained traction even among Protestant academics, combining scholarly discipline with rich Christology, and making a valuable contribution to Biblical studies in an age where many Christian denominations are wrestling more than ever with the question of who Jesus is.

Msgr. Jeffrey Steenson refers to the Jesus of Nazareth series as “a godsend.”

“(Pope Benedict XVI) was a true guardian of the faith in a time when Christian theology was losing its essential foundations, and his writings have helped so many find their way through the theological swamp,” reflected Steenson.

In Benedict XVI, Christians from all backgrounds had a model of fidelity to the Lord, and a humble witness to the harmony of faith and reason. His clarity of thought and commitment to the truth will continue to be a source of light and wisdom, especially to the Protestant clergy who serve as the primary pastoral-care base of the Coming Home Network’s membership.

CHNetwork Founder and President Marcus Grodi sums it up well: “Pope Benedict was a joyful disciple of Jesus Christ.”

Please join the CHNetwork family in gratitude for the life and witness of Pope Benedict XVI, and in prayer for the repose of his soul.

(Photo credit: The Catholic news agency of the Bishops’ Conference of Bosnia and Herzegovina)

Matt Swaim is Director of Outreach for The Coming Home Network.