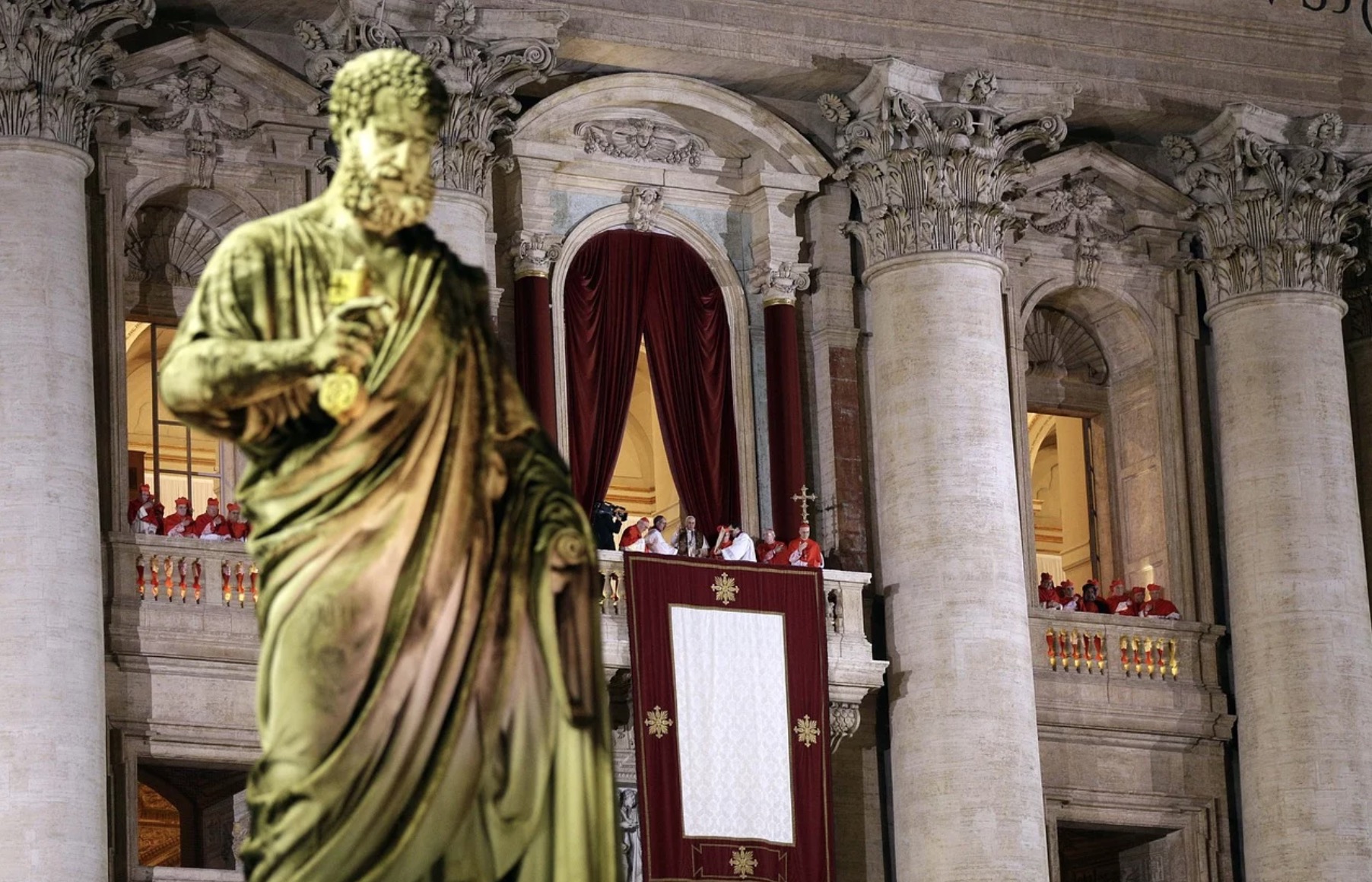 It’s humbling for me to think about passages in the New Testament I simply didn’t see when I was a Baptist pastor, passages that came alive and became bright with meaning only after I began to read them in the light of Catholic teaching.

You remember the story. Jesus leads His disciples into the region of Caesarea Philippi, where He asks them: “Who do men say that the Son of Man is?” The disciples begin to repeat what they’ve heard on the street: “Some say John the Baptist, others say Elijah, and others Jeremiah or one of the prophets.” Jesus then directs the question to them personally: “But who do you say that I am?”

It’s not clear how the Eleven would have answered this question had they spoken up. We only know how one of the disciples answered it. Verse 16: “Simon Peter replied, ‘You are the Christ, the Son of the living God.’”

At this point Jesus speaks directly to Simon in the presence of the other disciples and makes a series of truly remarkable statements about the role that Simon is to play in the Church He has come to found. Notice with me six ways in which Jesus presents Simon Peter to the other disciples, and to us.

1. Jesus presents Peter in the role of a prophet.

Verse 17: And Jesus answered him, “Blessed are you, Simon Bar-Jonah! For flesh and blood has not revealed this to you, but my Father who is in heaven.”

Simon’s father’s name was usually given as John, not Jonah. So why does Jesus refer to him as Simon, son of Jonah?

A likely answer is that Jesus is emphasizing the prophetic nature of Simon’s pronouncement. The knowledge Simon possesses of Jesus’ true identity is not something he has learned by human means. It’s something the Father has “revealed” to him.

Thus Jesus presents Simon as acting in the role of a prophet. But that’s just the beginning.

2. Jesus presents Peter as the chief patriarch of the New Covenant community, the Church.

Verse 18: And I tell you, you are Peter, and on this rock I will build my Church, and the gates of Hades shall not prevail against it.

In the Old Testament there are two primary characters whose names God changed. Do you recall who they were?

It turns out that the two most important patriarchs of the Old Testament people of God, Abraham and Israel, just happen to be men whose names were changed by God.

Peter will be the father of a new people. But there’s more.

3. Jesus presents Peter as the foundation stone of the new temple He’s building.

Verse 18: And I tell you, you are Peter, and on this rock I will build my Church, and the gates of Hades shall not prevail against it.

The center of Jewish worship in the Old Covenant was the temple, where God dwelt among His people.

At the time of Jesus every Jew knew that the temple had been built on a great natural stone slab, which they referred to as the “foundation stone” (Hebrew eben shettiyyah). Tradition held that this stone blocked the path to the underworld: the gates of Hades.

When Jesus speaks these words to Peter, He’s identifying the Church as the New Covenant temple of God and saying that Peter is the “Rock” upon which this new temple will be built. He will serve as that foundation stone, holding the powers of hell at bay.

4. Jesus presents Peter as the royal steward of the Kingdom of God, the chief steward in God’s house.

In ancient Israel the chief (or “royal”) steward of the king’s household wore the keys to the palace tied to his shoulder. He was in charge. Anyone who wanted to see the king had to go through him.

Notice how the royal steward is described in Isaiah 22:21-22:

Against this background, the most natural reading of Jesus’ words to Peter (“I give you the keys of the kingdom of heaven, and whatever you bind on earth shall be bound.”) is that He is informing Peter that in the kingdom He has come to inaugurate, Peter is to serve as the royal steward. Peter will be the chief steward in the New Covenant household of God.

But that’s not all.

5. Jesus presents Peter as the chief rabbi of a new Israel.

The terms “binding and loosing” clearly refer to the authority of the chief steward to open and close, to lock and unlock. But it had another meaning as well in Jesus’ day.

It was used to speak of the authority of the rabbis to render official interpretations of the Jewish law.

As Israel had twelve sons, thereby creating the twelve tribes of Israel, so Jesus has chosen twelve Apostles through whom He is creating a “new Israel.” What Jesus is saying here is that Peter will function as chief rabbi in this new Israel. He will bind and loose.

As the Father revealed to Peter that Jesus was the Messiah, so the Holy Spirit will guide Peter in His leadership of the Church such that the gates of hell will never prevail over it.

And then, last of all:

6. Jesus presents Peter as the chief forgiver of sins.

While “binding and loosing” speaks of Peter’s authority as teacher, in Matthew 18:15-18 Jesus uses this exact language to refer to the retaining and forgiving of sins.

Finally, in Revelation 1:5 Jesus is described as the one who has “loosed us from our sins.” Jesus has the authority to forgive sins. He has granted this authority to His Apostles. And among His Apostles, it is Peter who will be the chief “forgiver” of sins.

Objection: Peter and the Rock

Many non-Catholic Christians will argue that the “rock” Jesus is referring to in Matthew 16 is not Peter at all, but Peter’s confession of faith, or Jesus Himself. In support of this, they point to the fact that the Greek word for rock is petra while the name Jesus gives Peter is petros. These are two different things, they say.

But this isn’t difficult to explain.

First of all, in Greek, the language in which Matthew’s Gospel is written, the word for rock (petra) is a feminine noun and, therefore, has the feminine ending, which in Greek is “a.” (We still see this feminine ending in a number of English names such as Sarah, Laura, Rebekah, Angelina, Tina.) Well, since Matthew wouldn’t use the feminine form for a man’s name, he would naturally add the masculine ending, which in Greek is “os.” Thus we have petros.

But second, Jesus would most likely have been speaking Aramaic with His disciples, and in Aramaic the word for rock is kepha.

Peter is sometimes called Cephas in the New Testament. This is a transliteration of the Aramaic kepha. The point is: in Aramaic Jesus would have said, “Simon, you are kepha and on this kepha I will build my church.” There would have been no confusion.

Finally, making the “Rock” refer to something other than Peter is simply awkward in a passage in which Jesus is speaking directly to Peter and specifically about the role Peter is to play in the New Covenant people of God.

“I tell you, you are Rock and on this Rock I will build my Church.”

“I will give you the keys of the kingdom of heaven.”

“Whatsoever you bind on earth shall be bound in heaven.”

“Whatsoever you loose on earth shall be loosed in heaven.”

In the Greek, Matthew uses the singular form of the second person pronoun all the way through.

No. For anyone not bending over backwards to make sure the Catholic teaching on Peter is somehow rendered ambiguous, uncertain, and essentially unsupported from Matthew 16, it is clear that in this passage Jesus is singling Peter out from the others.

It is Peter who has been chosen by Christ to be the patriarch of a new people of God, the foundation stone of a new temple, the royal steward of a new kingdom, the chief rabbi of a new Israel, the chief forgiver of sins in a new Church.

The passage is Catholic to its core.