St. Elizabeth Ann Seton: A Convert Who Brought Her Gifts With Her Into the Church 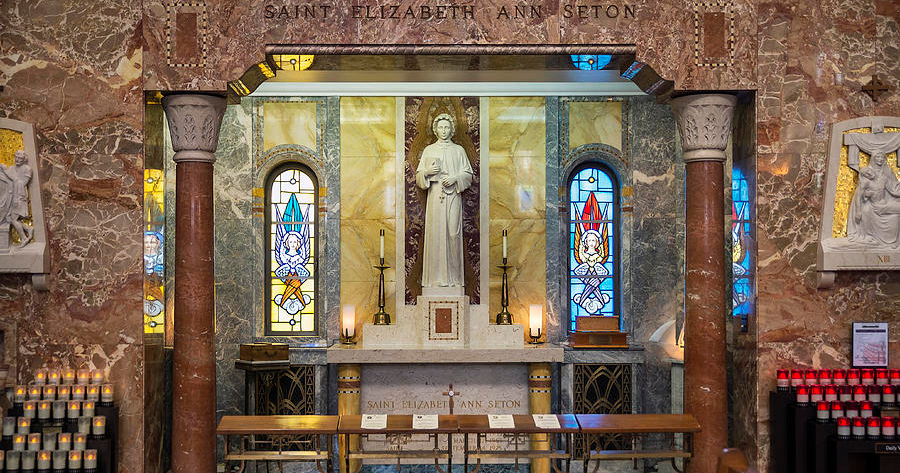 On Saturday, June 8, 2019, The Coming Home Network hosted a day of reflection at the National Shrine of St. Elizabeth Ann Seton in Emmitsburg, Maryland. There are a number of ways in which St. Elizabeth is a uniquely appropriate spiritual companion for converts and journeyers. She was drawn by the Eucharist, struggled with her desire to enter the Church, and faced opposition from loved ones when she decided to become Catholic. Furthermore, she experienced all of these struggles and joys as a wife and mother in an American context.

In addition to all of that, St. Elizabeth Ann Seton serves as a model for converts to the Catholic Faith in that she did something well that so many of us struggle to do: she took her gifts from a lifetime relationship with Christ outside the Church and figured out how to use them inside the Church after she entered.

She recognized her gifts came from God

Elizabeth was born two years before the Declaration of Independence was signed. From an early age, she was taught the value of service by her parents, especially her father, a surgeon who would serve immigrants in New York City, even risking his life to do so when yellow fever hit the city. As a young woman in the Episcopal Church, she participated actively in her parish’s social ministry and often distributed food and other vital items to needy families. In addition to those passions, she was also a talented musician and an avid reader, and in an age where education for women was rare, she saw early on the value of perfecting the intellect to the glory of God.

Later, she would be widowed with five young children to care for, and the sense of her need for God’s providence would be sharpened. St. Elizabeth Ann Seton knew that God had guided her path the entire way and had given her experiences and gifts to weather the storms of life. When she finally entered the Catholic Church in 1805, she would bring all those experiences of sorrow, joy, providence, and trust into the Church with her, along with a talent and heart for education and the works of mercy.

She sought ways to use her gifts in existing Church structuresI will go peaceably and firmly to the Catholic Church: for if faith is so important to our salvation, I will seek it where true faith first began, seek it among those who received it from God Himself. -St. Elizabeth Ann Seton Click To Tweet

Because she was skilled at hospitality and education, as a new Catholic, Elizabeth started an academy for young women. When news of her Catholicism spread, however, many Protestant families pulled their daughters out of it, and it failed. As a young widow, initially she thought this meant she should head to the convent, but there was no way she could get the Church’s per- mission with five children in tow. Nevertheless, she found help in Baltimore from a Sulpician priest who recognized her gifts and talents and helped her set up a small school next to Mount St. Mary’s Seminary in Emmitsburg, Maryland. Her dream of teaching continued inside the Church, even though at one point it had seemed that her conversion to Catholicism would mean leaving that dream behind.

For many who served in Christian ministry before entering the Catholic Church, there is a fear that their ministerial gifts and passions won’t be able to flourish in a Catholic context. The frustrating reality is that there are many outreaches and ministries that exist in Protestant congregations that don’t always have a satisfying equivalent in the average Catholic parish.

And yet especially for people who have served in Protestant ministry, there are a number of places in the Church where their gifts are badly needed. A Protestant pastor often has to be an administrator, an educator, a counselor, and a financial manager, and those are all areas where many Catholic parishes, schools, and apostolates would be grateful for experienced help.

Some of our members have run ecumenical ministries that have lost support over their decision to become Catholic, just like St. Elizabeth Ann Seton’s original academy for girls. But perhaps there’s an existing apostolate that could use your expertise, just in an unexpected way. And perhaps, like St. Elizabeth, having your original plans fall through might help open your eyes to a new way of trusting in God’s providence.

She used her gifts to create something new for the Church

In some ways, Catholic schools existed in the Church in the United States prior to the work of St. Elizabeth Ann Seton. When she was invited to Baltimore, her school was adjacent to a flourishing seminary, and there were isolated Catholic schools in New Orleans and in the Spanish missions in the West where children could receive education, meals, and sometimes even housing. But in the early 1800s, there was no organized system of Catholic education like the one we take for granted today.

Mother Seton created a system of education for all children who came to her order, wealthy or poor, regardless of their ability to pay. Her model of virtue education in the Catholic tradition would be adopted by the parochial system, setting in motion a revolution in Catholic education. She founded a new religious order to run the school, the Sisters of Charity, which adopted the rule of St. Vincent de Paul’s Daughters of Charity but adapted to the needs of a young and growing United States. Her sisters would go on to run orphanages in New York City, do mission work on the Western frontier, and act as nurses on the battlefields of the Civil War.

For converts to the Catholic Faith who have ministry backgrounds, it can be easy to succumb to a spirit of defeatism when you can’t find ministries or apostolates in the Church that resemble the ones you used to lead. But perhaps those ministries and apostolates don’t exist because God is asking you to create them! Perhaps, like St. Elizabeth Ann Seton, with a combination of perseverance and humility, you can take the gifts and passions that God has impressed upon your heart and bring them to bear in a whole new way inside the universal Body of Christ. Or, perhaps there’s an existing apostolate that could use your expertise, just in an unexpected way. And maybe, like St. Elizabeth, having your original plans fall through might help open your eyes to a new way of trusting in God’s providence.

St. Elizabeth Ann Seton knew better than anyone what it was like to have her efforts fail, her family question her sanity, and her new Church not know exactly what to do with her. Especially during her first few years as a Catholic, there was a lot of trial and error and a lot of radical reliance on the providence of God in the midst of seemingly impossible circumstances. But St. Elizabeth knew, as did St. Paul, that “the gifts and the call of God are irrevocable” (Rom 11:29).

Even after she found a place in which to use her gifts, her order would be beset by numerous tragedies, and she herself lived to be only 46 years old, with a lot of work left undone. Nevertheless she can serve as a powerful model to all of us who have worked in various forms of ministry before becoming Catholic and who are looking for ways to use our gifts in a Church that might not know exactly what to do with us and that we might not know exactly how to plug into. For St. Elizabeth, it was a matter of being open to God’s will, wherever it led her, and being faithful to the sacraments while she waited for her answers.

As she put it once to her Sisters:The first end I propose in our daily work is to do the will of God; secondly, to do it in the manner he wills it; and thirdly to do it because it is his will. -St. Elizabeth Ann Seton Click To Tweet

Matt Swaim is Outreach Manager for The Coming Home Network