This year marked the 44th anniversary of the Supreme Court’s Roe v Wade decision to legalize abortion on demand in the United States, and every year since, thousands of pro-lifers of all religious backgrounds, and even no religious backgrounds, gather in Washington DC in hopes of bringing an end to abortion in our country.  This was my first time participating, and since I recently relocated to the Washington, DC area, it was great that our web and new media guru Seth Paine was able to fly out to join me to help cover it for CHNetw0rk, in the hopes of showing what Christians can do to impact the culture when they focus on what unites them. 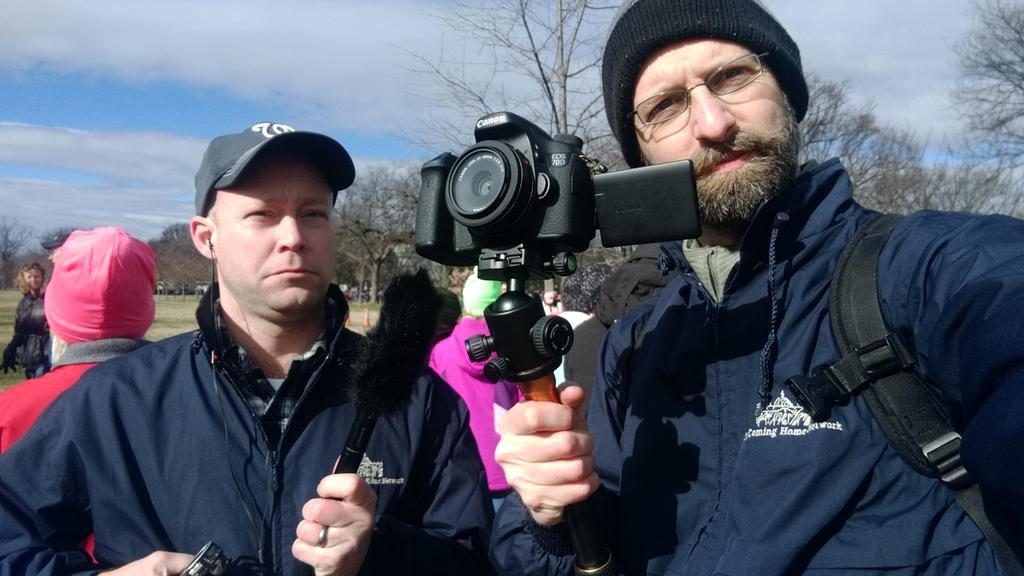 Seth and I hopped on the metro Friday morning, with a camera, some audio recording equipment, and our handy Coming Home Network logo jackets, hoping to get some great footage- and we were blown away by the size of the crowd, the peaceful nature of the protests, and the way that Christians, and even non-Christians, were marching together arm in arm for a common purpose.

We knew that several people that we’d met before would be there- including our colleague Scott Scholten, who produces The Journey Home tv program.  He had driven all night and arrived in DC that morning with a group of kids from his parish.  We assumed that the possibility of running into him in a potential crowd of hundreds of thousands would be a long shot, especially since he said we’d be able to track him down if we just looked for “the guy in the Cubs hat.”  Easy, right?  Imagine our surprise when we managed to bump into him less than two minutes after getting to the Washington Monument! 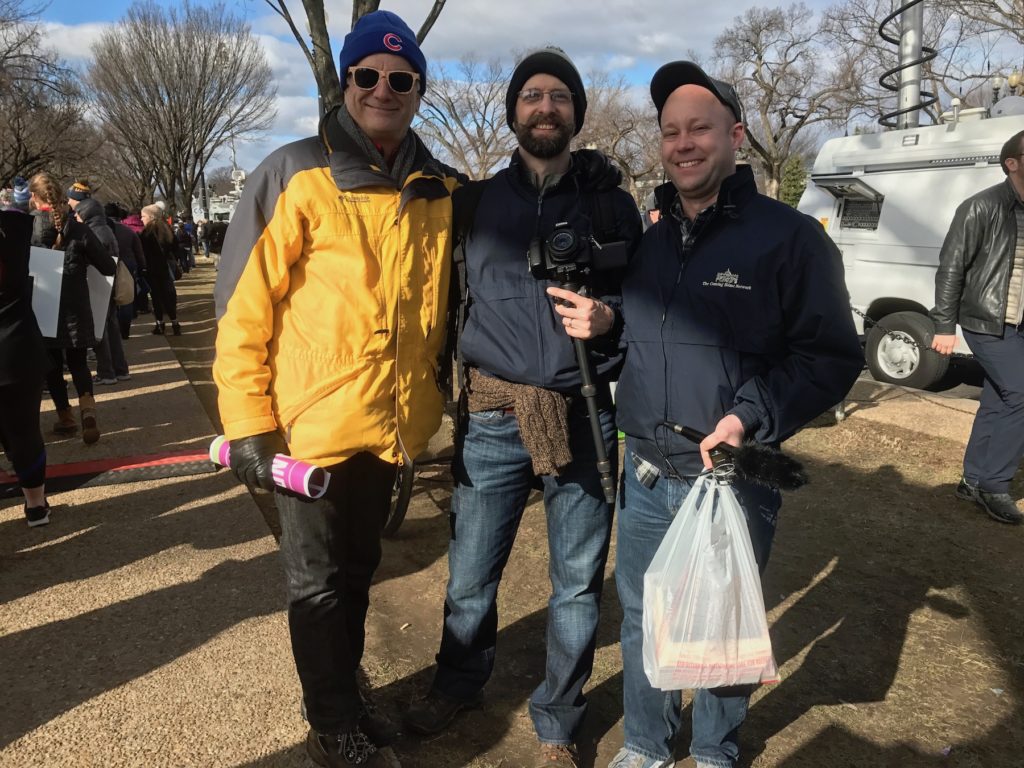 As the crowds rolled in for the kickoff rally, which featured a number of speakers, including Vice President Mike Pence, Baltimore Ravens wide receiver Benjamin Watson, and a number of representatives and senators from various parts of the country, Seth and I were overwhelmed at the sheer numbers gathered at the Mall, many of them carrying signs detailing where they were from, as well as signs promoting the pro-life cause.  One of the first groups we spoke with had driven in from Ithaca, NY.  The gentleman we talked to told us that his Assemblies of God church had gotten together with their local Catholic parish and ridden on buses to the March together.  I imagine more than a little ecumenical dialogue occurred on that road trip! 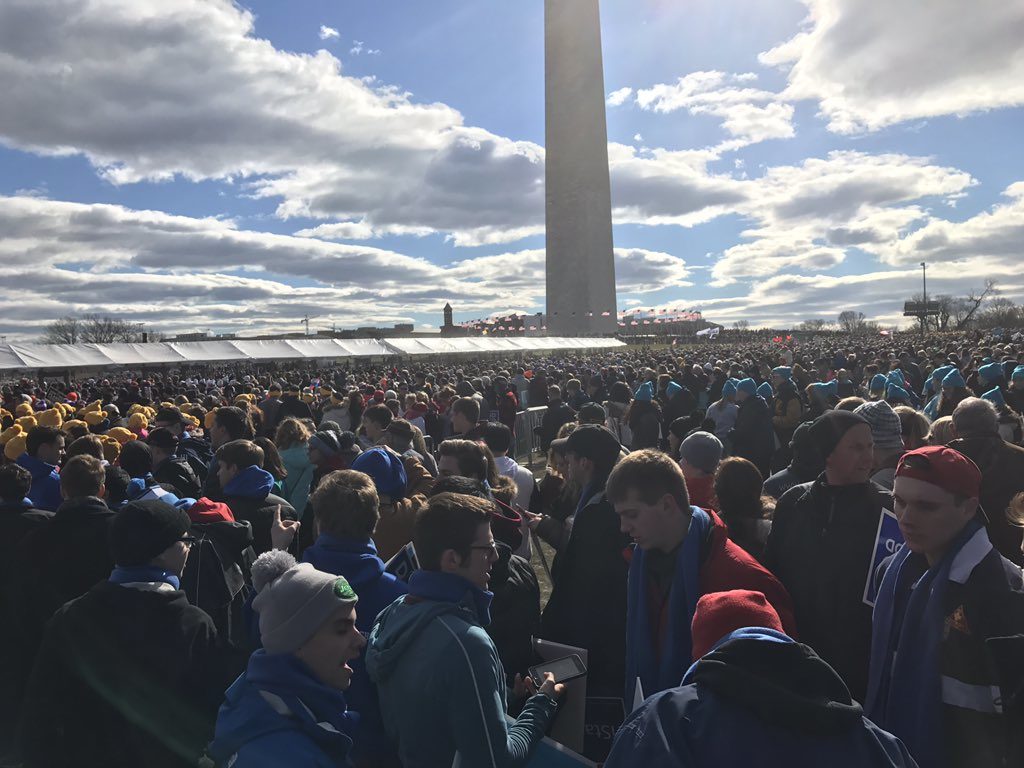 It seemed that almost every form of Christianity was represented at the March.  We saw a large crowd holding signs that said “Evangelicals for Life,” and were even able to walk and talk briefly with a large group of Orthodox Christians, who were singing hymns to Christ together as they marched.  What an awesome experience to speak with them about how our shared commitment to the sanctity of human life can serve as a rallying point for further conversations about how we can work toward greater Christian unity! 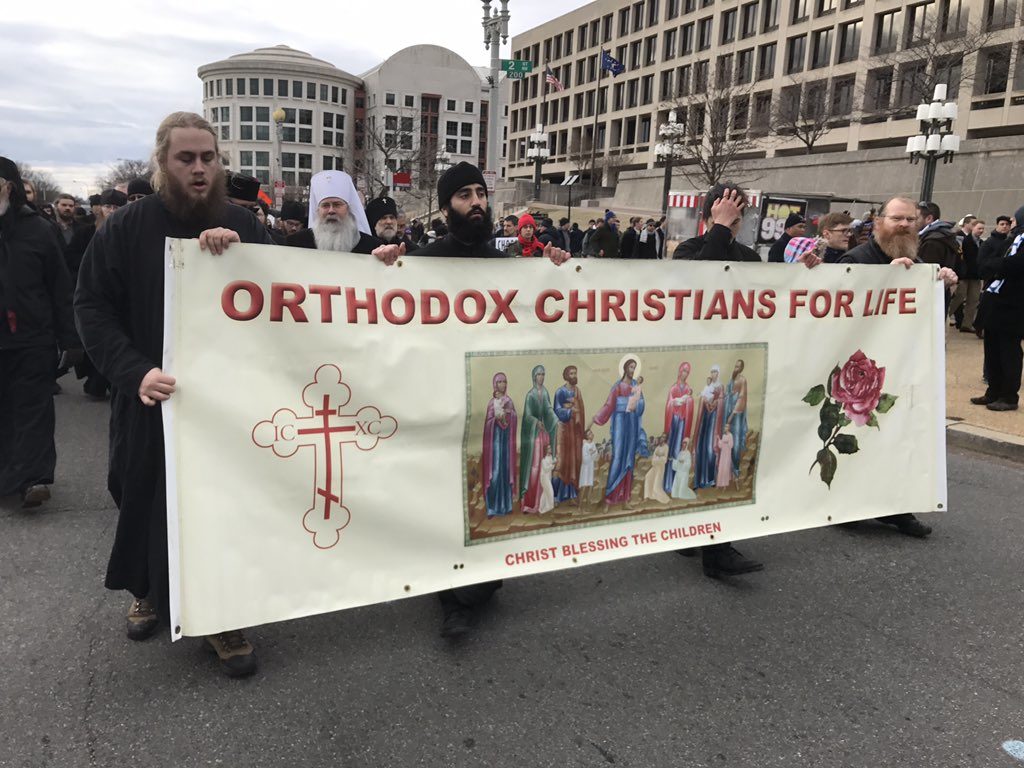 Of course, not everyone there was interested in the cause of Christian unity.  There was a contingency- really only one guy- carrying around some anti-Catholic signage and a bullhorn, insisting that we Catholics were deceived, and headed for hellfire and brimstone if we didn’t repent.  Pretty much all of the marchers agreed that it was best just not to engage him.  Take a look at the bottom of his sign, though- how often to you see someone using John 6 to argue AGAINST the Catholic Church? 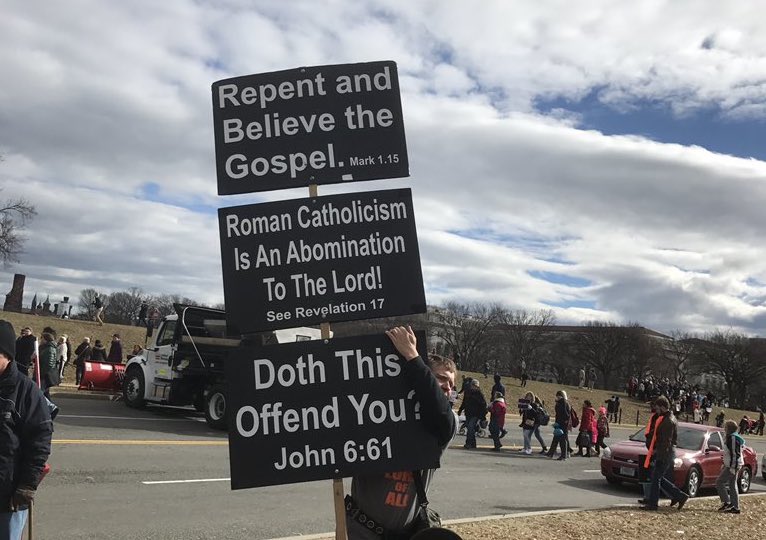 All in all, it was a fantastic experience- Seth was able to get some wonderful footage, and we were able to record some great interviews that we can hopefully share in the future to show a sort of “ecumenism of the trenches”– Christians who might not yet be able to come together on doctrinal issues coming together on the corporal works of mercy.  Hope to see some of you there next year- after our first taste of the March for Life, we’ll definitely be going back!