What Do You Remember About Your First Mass? CHNetwork Community Question 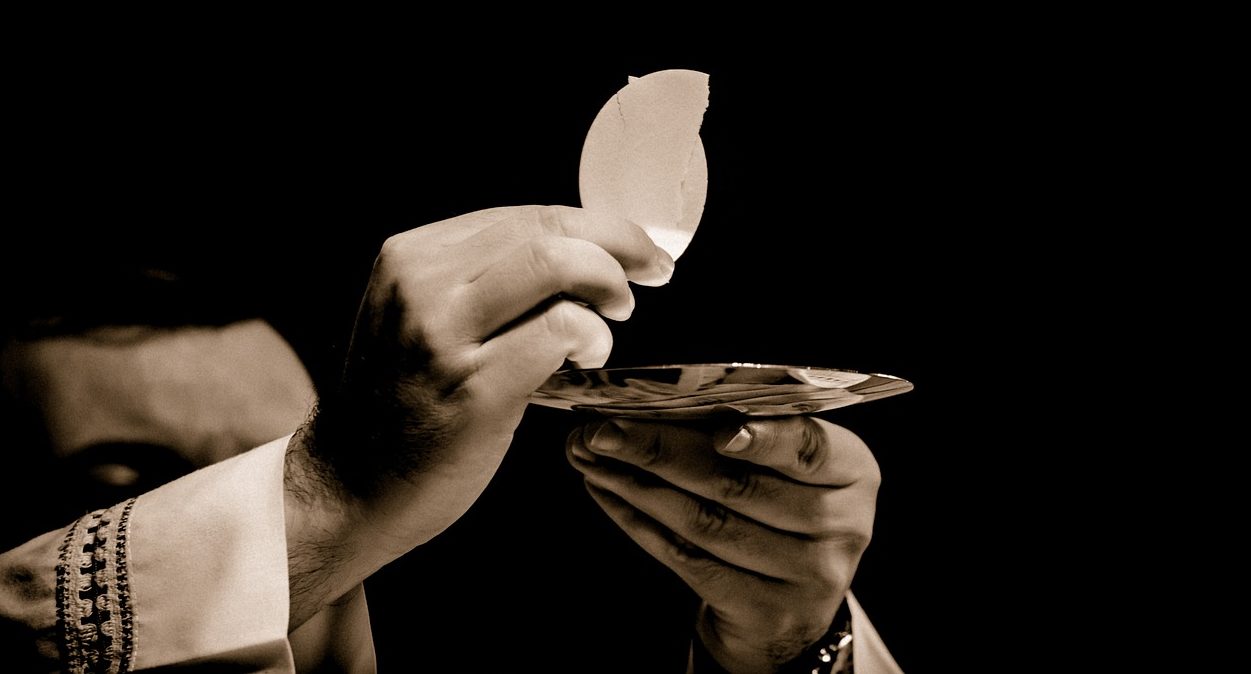 Many of our members are lifelong practicing Catholics, or Catholics who have returned to the practice of their faith after time away.  However, there are also many CHNetwork members who were children, teenagers, or even adults before they ever experienced their first Mass.  There are still other members of our community who are interested in the Catholic faith, but have yet to go to Mass for the first time.  That being said, we posed this question to our CHNetwork members and readers:

What do you remember about the first time you attended a Catholic Mass?

Was it what you expected?  Did you have any expectations at all?  How was it similar to other worship services you’d been to, and how was it different?  Did you want to go back?

“I went to my first Mass while still a staunch Southern Baptist and was struck by how many Scripture passages were woven throughout the Liturgy. I heard parts from the Psalms and the Gospels, Jesus’ words and His Apostles’ too. I felt both confused at the sitting, standing, kneeling, but also impressed that the Catholic Church took Scripture so seriously.”

“Having some extended family members who were Catholic back in the 1950s, I remember one weekend when they were watching me for my folks and brought me to their Mass. This was on Long Island, I have no idea what parish as I was maybe 5 at the time. I remember being awed by what some now call the ‘smells and bells’ and the glitter of gold, it seemed, everywhere. This was a Latin Mass (was there any other kind in 1955?) and it made a deep impression on me. However, my parents were agnostic at the time, and we moved to California a few years later, so this is my only memory.”

“When I first went to a Catholic Mass in 2004, it was at St. Patrick’s Cathedral and we sat in the middle rows.  My intention was to get in & get out-  I only went because my girlfriend at the time (wife now) asked me to go with her. An usher came up to me and asked me to collect the offering. At that moment I felt the Spirit inform me that I have a duty in the Church. I began RCIA classes soon after and was baptized into the faith in 2005.”

“I remember the sense of being in the precincts of the Strange and the Holy, yet also the homely and familiar. It felt like a bone long out of joint popping back into place.”

Mark Shea, Author of “By What Authority: An Evangelical Discovers Catholic Tradition“

“When I decided to go to Mass for the first time, a friend of mine picked a parish in the Yellow Pages. We got to the church 15 minutes early (like good Evangelicals) and there was almost no one there. We picked a pew about halfway up and I sat there and prayed. A couple of minutes later, a woman approached us and asked us if we wanted to present the gifts. I gave her a confused look and said I didn’t know what she was talking about. She explained that at the right point she would bring us to the back and we would carry up the bread and the wine for communion. I then told her that I wasn’t Catholic and she told me that was ok. I didn’t see why to say no so we ended up doing it. So at my first mass, I presented the gifts to the priest. I felt so touched that it was one of the reasons I kept going back to that parish. A few years later I was confirmed in that parish and a year after that was married there and had my first baby baptized there.”

“The first time my husband and I went to Mass together was amazing. I had been studying the faith for a few weeks at that point. I remember thinking that the liturgy was beautiful and that this really was the ancient Church. When we were kneeling during communion I began sobbing. I was overwhelmed by the beauty and I truly felt God’s presence in that place.”

“I do remember my first Mass. I crept into the church and the priest was standing there greeting people, so I walked up to him (I now know him as my beloved Monsignor Leo) and asked if I as a Protestant could come and watch what happened at Mass. He said of course, and welcome! So I did. I sat at the very back in a corner feeling very self-conscious indeed. I really didn’t like that Mass at all. Two sisters sat in front of me chattering almost the entire time. Nobody sang loudly and lustily like they did in my Protestant churches. It was vaguely Anglican in feeling but without any of the beauty. I walked out thinking to myself, ‘How on earth could I ever become Catholic and endure THAT.’ But there was something that kept calling me back because I knew I had found truth there, so I just kept searching and now I am happily Catholic.”

“This wasn’t my first mass, but a significant one none-the-less. I recall the funeral Mass of a friend that was celebrated by the Bishop. I was at the crossroads in my journey and left thinking, ‘well there’s no way I can actually do this. It’s so dry!’ Less than a three months later we were attending Mass weekly and my wife was meeting privately with the Priest for her RCIA. The moment it felt furthest from us, we were closest to it.”

“My first Mass was in November 1975, when I was 20. Strangely enough, it was a Christmas Mass, the reason being that Ohio University was letting out for the holiday break (from Thanksgiving till after New Year’s) and the students wanted a Christmas Mass together, so the priest just went with the flow. You have to understand, it was the ’70’s. Anyway, at that time I was Lutheran. I was surprised by the liturgy. From my knowledge of the Lutheran liturgy, I recognized most of the Mass responses but I struggled through them because my Lutheran liturgy was, at that time, in Elizabethan English, with a lot of ‘thees’ and ‘thous.’ The Mass liturgy was in modern English. This struck me because I was always told that we Lutherans were the updated and reformed Christians and the Catholics were antiquated. This was an experience which God used to begin to break down the many barriers and misconceptions I had about the Church. The Lord can use many things to get our attention, even a 1970’s Christmas folk Mass. And yes, out of ignorance, I did receive communion.”

“My first experience of the Mass took place some 58 years ago. I was 15, and I had been totally disillusioned with Protestantism since age 12, when as a Methodist in the course of studying to ‘join the church’ (in those days, children, even if baptized, were not considered members), I had noticed a number of major contradictions and denials of reality in the books presented to me. I was tired of continuing to attend a church whose doctrines I could not accept, so instead of going there, one day I walked over to the nearby Catholic church and sat in on the Mass. It was 1956, and the Mass was still in Latin. I was impressed by the solemnity and ritual, enchanted by the Gregorian chant, pleased to hear real Bible teaching instead of the wide-ranging 45-minute rhetorical wonder from the pastor at the Methodist church. I continued to attend Mass after that. I was also beginning to learn about Catholicism through a couple of girlfriends who were Catholic. By my 16th birthday, I had made up my mind where I would go once I was of age.”

“When we were investigating the Catholic Mass, it took me awhile to figure out the significance of all the elements and liturgy; but the first couple of times I remember thinking, ‘There is a different approach to ‘worship’ going on here.’ It took many more experiences in Mass to unpack that idea, but I was right.”

“Probably the first thing of significance that I remember clearly was the care with which the ablutions after communion were performed. I think it might have been at that point that I realized that the elaborate ceremony of the Catholic Mass, far from being empty ritual, flowed out of the Church’s understanding of what had truly happened at the Mass; that Christ Himself was made substantially present in His body, blood, soul and divinity. For if each minute particle of what had been bread was now His sacred Body, and each barely visible drop of what had been wine was now his precious Blood, it only made sense to take the greatest care to avoid even unintentional profanation.”

“It was a Christmas Midnight Mass. The choir from the loft sounded like the angels. I felt really self-conscious, like everyone was watching me make mistakes (they weren’t). I didn’t understand everything, but found it beautiful and reverent.”

Deacon Brandon Bigam, Seminarian for the Diocese of Lexington

“The first time I went to Mass, I was struck by the resonances with the Jewish liturgy. Like the Jewish liturgy of the synagogue the Catholic Mass was centered on the Word of God, but instead of Torah scrolls, the center of Catholic liturgy is the Eucharist, Jesus, the Word made flesh hidden from our sight. Here I could see what I would later get to experience: Catholics tasting and seeing the goodness of the Lord.”

What about you?  What do you remember about the first time you attended a Catholic Mass?  Please share in the comments below, and feel free to join this and other discussions in our Community Forum!