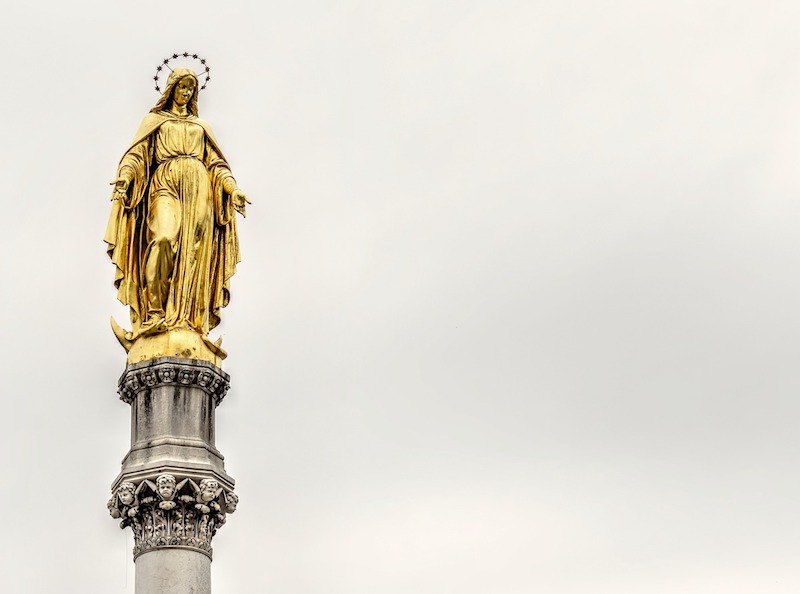 We used the occasion of the Feast of the Assumption of the Blessed Virgin Mary to ask our community about the earliest Marian “hurdle” they were able to overcome in their journey toward the Church’s understanding of her.

Here’s a sampling of what we received:

“I have to admit, I have yet to warm up to Mary as a former Baptist. So I haven’t had a teaching that spoke to my heart yet.

But I did begin to feel a bond with her today during Mass, when our pastor spoke of Mary as a woman in a way that I hadn’t heard before. I don’t know exactly what it was about his homily that struck so deep, but it took me back to that ‘why me, Lord?’ moment in my life, when I could not believe what was happening to me and what it would mean if I said ‘yes’ to Jesus… we are all asked to do that, at some point, and the way Scripture connects all these dots consistently amazes me–the story of Mary is everyone’s story. She was the first ‘believer,’ and she was as unnerved by this journey, at first, as we all are. So I ‘felt’ that, to be sure…”

“For me, it was understanding Mary as the new Ark of the Covenant- that just as the pure vessel which contained manna, the law, and priestly relics had a place of special honor in Israel without being an object of worship itself, so could Mary, who carried in her womb the Bread of Life, the fulfillment of the law, and the new High Priest, should have a special honor among Christians without being an object of worship herself.”

“Seeing a series on Marian devotion sparked my investigation and journey into the Church.  Learning that Mary is the new Ark of the Covenent was a turning point for me as well.  I had already begun to understand and accept the Catholic view of Mary as Holy Queen based on supporting scripture on how queen-mothers were honored and considered a place of authoritive access to the king in monarchies of the Old Testament era.  That typology opened the door to connecting the Old and New Testament writings at a much deeper level than I had learned in my Protestant background.

Developing a deeper devotion (honor) for Mary is still a work in progress, but I love the Catholic view of her as a beautiful path to Jesus Christ; not a distraction, or detraction from worshipping Him, but elevating Him and placing Him in an even more reverent, holy and authoritative place as Lord than I had known before.”

“The first ones for me were that she is the Queen of Heaven and the mother of all Christians on the basis of Revelation 12:1 and Revelation 12:17.  If you ask almost any simple Christian who hasn’t studied Revelation to read chapter 12 and then tell you who the woman is in the chapter…  Hmmm… Mother of the male child that Satan is after, I wonder who that could be?  I know, Mary!  I tried it on a group of unsuspecting United Methodist teenagers I was teaching Revelation to and Mary was their unanimous answer.  I didn’t connect the dots any further for them since I was still on the journey myself and I didn’t want to get fired as their Sunday School teacher.”

“I’d been raised a Baptist and became a Lutheran right before starting seminary. For me, Mary was just another supporting figure in cast of characters surrounding Jesus in the New Testament: a person like Nicodemus, or Zacchaeus, Joseph, John the Baptist, Elizabeth and Zechariah. I simply didn’t think about her much at all even though I knew that Martin Luther had written a lovely devotional piece on her in his commentary on the Magnificat.
Then, in my senior year at seminary, I was selected to participate in an ecumenical research seminar involving seminarians from Presbyterian, Baptist and Roman Catholic seminaries. We were each to prepare a 30 page research paper on a topic of our choice and share it with the whole group while discussing and critiquing the papers of the small groups to which we’d been assigned. The Roman Catholic seminarian in my group wrote his paper on the four Marian doctrines and included suggestions for pastoral application. I remember my reaction clearly: ‘What he says does not contradict the Gospel, but why would you choose to say things that way?’ That ‘why’ question formed the heart of our discussion.

Eventually, I came to understand that in Catholicism, Marian Doctrine is a subset of Christology; it illustrates and reinforces christological faith, doctrine and belief.  After 35 years, as I approached the Roman Church for confirmation, the Marian aspects of Faith and Practice were not a major issue.”

“I would have to say that for me it was coming to understand the Catholic teaching on the Communion of Saints, and within that the idea that Mary was alive with her Son and could care about me and pray for me. As a Protestant I imagined everyone in heaven enveloped in the glory of God and pretty much unaware of what’s happening on earth. I thought that only Jesus was focused on and praying for those of us on earth. As soon as the Catholic vision opened to me everything changed. I now saw the Church on earth as united to the Church in heaven and this opened the door to be seeing Mary as united to me. So it was the idea of Mary’s intercession that first made sense to me.”

Do you have an experience of coming to understand a point of Catholic teaching on Mary that you’d like to share?  Please do so in the comments below, and check out other great topics of community discussion in our forum!