As the #UMCGC Meets this week, here are 6 times John Wesley sounded Catholic 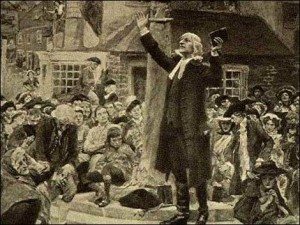 At the United Methodist Church’s General Conference meeting this week in Portland, Oregon, many significant issues are being debated, from the nature of ecclesiastical authority to questions regarding human sexuality.  As is the case in many such gatherings, representatives of differing sides are appealing to founding principles to make their cases.  Since many members of the Coming Home Network see John Wesley, the founder of Methodism as a significant influence in their own spiritual formation, we thought it might be of interest to refer to six different occasions when Wesley’s thought harmonized with classical Catholic spirituality and doctrine.

On the perpetual virginity of Mary:

“I believe that (Jesus Christ) was made man, joining the human nature with the divine in one person; being conceived by the singular operation of the Holy Ghost, and born of the blessed Virgin Mary, who, as well after as before she brought Him forth, continued a pure and unspotted virgin.” Letter to a Roman Catholic

“I believe infants ought to be baptized; and that this may be done either by dipping or sprinkling.” Sermon 39, on The Catholic Spirit

“We believe, it would not be right for us to administer, either Baptism or the Lord’s Supper, unless we had a commission so to do from those Bishops, whom we apprehend to be in a succession from the Apostles.” Letter to Westley Hall

On reading the Church Fathers:

“Can any who spend several years in those seats of learning, be excused if they do not add to that reading of the Fathers the most authentic commentators on Scripture, as being both nearest the fountain, eminently endued with that Spirit by whom all Scripture was given. It will be easily perceived, I speak chiefly of those who wrote before the council of Nicea. But who could not likewise desire to have some acquaintance with those that followed them with St. Chrysostom, Basil, Augustine, and above all, the man of a broken heart, Ephraim the Syrian? ” An Address to the Clergy

On the harmony of faith and works:

“Pray that the love of God and of all mankind may be more largely poured into my heart; that I may be more fervent and active in doing the will of my Father which is in heaven, more zealous of good works, and more careful to abstain from all appearance of evil.”  Sermon 39, on The Catholic Spirit

“Love fasts when it can, and as much as it can. It leads to all the ordinances of God, and employs itself in all the outward works whereof it is capable.” Plain Account of Christian Perfection

Of course, Wesley often qualified these statements, and in many cases they were attempts to highlight common ground with Catholics or other Christian groups.  In some instances, such as in his view of apostolic succession, he would go on to renounce an earlier theological opinion.  Nevertheless, these passages provide a fascinating look into the thought of one of the most influential Christian minds of the last few centuries.

In the meantime,  we ask you to join us in lifting up our United Methodist brothers and sisters in prayer as they discern the will of God at this year’s General Conference!  Any of our Methodist (or former Methodist) readers are invited to share their thoughts on this year’s gathering in the comments below.  May we all someday be one, as Jesus and the Father are one (Jn 17:11)!

Matt Swaim is the Communications Coordinator for the Coming Home Network and the co-host of the Son Rise Morning Show on EWTN Radio. His books include "Prayer in the Digital Age" and the "Catholic Puzzles, Word Games and Brain Teasers" series for Ave Maria Press. Received into the Catholic Church in 2005.