Eight Things To Love About the Catholic Church Part 7: The Bible is Catholic 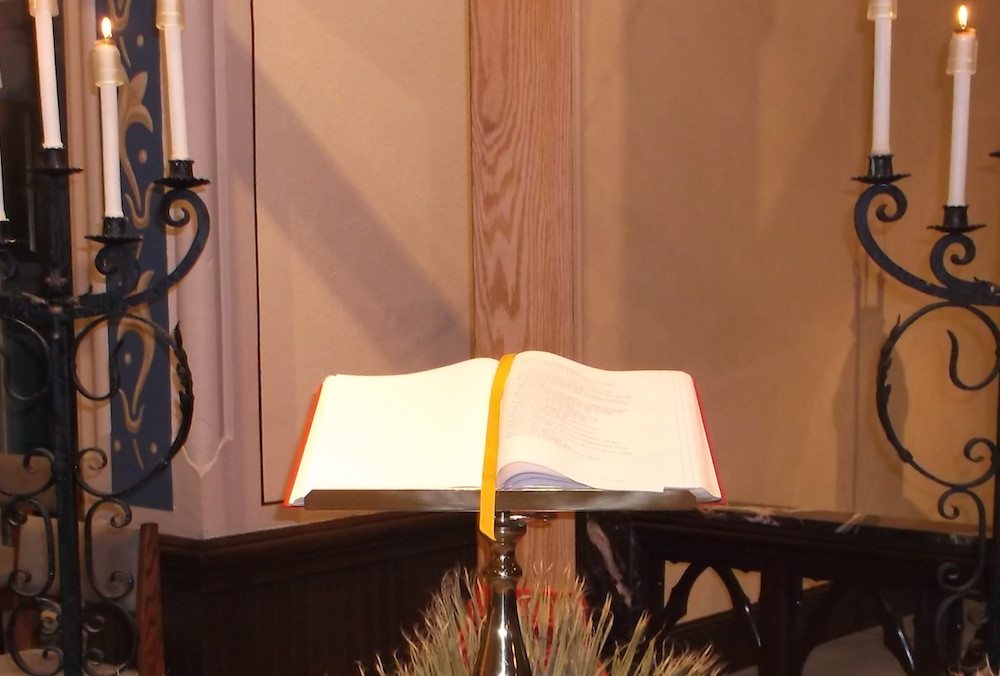 Try explaining to our Fundamentalist brethren about almost any tenet of the Catholic Faith and you’re likely to hear in response, “Chapter and verse, please.”  In other words, of course, they want to know exactly where that teaching is found in the Bible because they adhere to what is spelled out and therefore only such teachings are retained by them. However, not every belief in Catholicism is to be found word-for-word in Sacred Scripture.

All teachings of the Church, however, are in harmony with Sacred Scripture.  This essay will look at the trifecta of the Church’s authority: The Bible, Tradition, and the Magisterium.

The Holy Trinity is one of the teachings of almost every Fundamentalist community (but not all of them) that is not specifically in the Bible.  Nowhere is the doctrine of the One Godhead as Father, Son and Holy Spirit — co-eternal and co-equal — found in the Bible; but they are “words in harmony with Scripture”, according to the second of the 16 Fundamental Truths of the Assembly of God.  This is important because it is my Assembly of God family and relatives who always love to insist on “chapter and verse.” It seems that they will allow doctrines “not (explicitly) found in the Scriptures” but for Catholics to do this it is perceived as “adding to what is written.” Most of our understanding of the Holy Trinity comes from the extensive writings of the Early Church Fathers such as St. Augustine, St. Athanasius and many others.

Let’s look at where the Bible itself came from.  None of the gospels were written as historical texts or as directives on how to start a church.  Rather, they were written to attest to who Jesus was — “so that you may believe” (Jn. 20:31).  The Acts of the Apostles are a continuation of Luke’s gospel — he tells of the early Church and of Paul’s conversion and missionary travels.  It’s kind of like a journal. Paul’s letters are to those communities where there were issues that needed to be addressed. He wrote personal letters to Timothy, Titus, and Philemon.  Hebrews is a masterful treatise on the eternal sacrifice of Jesus. James wrote  one letter; Peter wrote two letters, John wrote three — plus the Book of Revelation — and Jude wrote one. Other gospels and letters were written but did not make it into the canon of the New Testament.

While many Protestants claim that we “added books” to the Old Testament (The Catholic version has 46 books while the Protestant has 39), all Protestants do agree that we Catholics got it right with the NT because they have the same one we do. The first canon of the NT was promulgated in A.D. 397 at the Council of Orange in Africa. Many Protestants claim that the canon was only put forth at the Council of Trent (held from 1545 -1563); however, this is incorrect.  It was not promulgated then but re-iterated for all time after Martin Luther had decided to take out the Letter to the Hebrews, the Letter of James, the Book of Revelation and the Letter of Jude.  Jude, by the way, makes reference in his letter to the Assumption of Moses and the Book of Enoch—two writings that did not make it into the canon of the New Testament. The New Testament does not come with its own list as to which writings would go into it.

The difference with the Protestant Old Testament and the Catholic one is about which version was used in the time of Jesus.  In his day, Hebrew had fallen out of use as an everyday language; Aramaic had taken its place.  However, with the conquest of Alexander the Great, Greek became the biblical language due to the Hellenistic influence.  The Greek Old Testament (called the Septuagint) contained 46 books but the older Hebrew one (Masoretic text) contained only 39. After the new Christian sect fell out of favor with mainstream Judaism (around A.D. 90) and were driven away, the Jews took the Hebrew version of the Old Testament as their text because the Christians were adept at using the seven “other” books to convert people.

Those seven books, by the way are: Judith, Tobit, Baruch, Sirach (or Ecclesiasticus), the Wisdom of Solomon, First and Second Maccabees, the two Books of Esdras, additions to the Book of Esther, additions to the Book of Daniel, and the Prayer of Manasseh.  Here we have the attestation of the Jews in their own online encyclopedia as to why, ultimately, the Septuagint was rendered “unwelcome”: “it had been adopted as Sacred Scripture by the new faith. A revision in the sense of the canonical Jewish text was necessary.” Further, “The quotations from the Old Testament found in the New are in the main taken from the Septuagint; and even where the citation is indirect the influence of this version is clearly seen” (http://www.jewishencyclopedia.com/articles/3269-bible-translations). This tells us clearly that Jesus and his apostles used the Greek Septuagint Old Testament and not the Hebrew Masoretic.  I am uncertain as to why Protestants kept to the Hebrew version of the OT and rejected the version clearly used by Jesus.

Oral Transmission of the Word

As for Sacred Tradition (not tradition w/small “t”), it is another way of handing on the faith — the Latin, “Traditio” means “to hand on.”  Almost all of Paul’s letters were composed before any of the gospels were written. Paul tells us in Acts 20:35 when he addresses the people in Aramaic, he states that he was educated “at the feet of Gamaliel” which is quite significant because Gamaliel was a master of the oral law/tradition.

There was no such thing, of course of anyone having his/her own copy of the bible to look things up.  Protestants will cite the passage that “All scripture is inspired by God and is useful for teaching, for refutation, for correction, and for training in righteousness…” (2 Tim 3:16) but it does not say only scripture. In fact, the Scripture Paul was referring to was the Old Testament for the new had not even been formed. In 2 Thes. 2:15 Paul exhorts his readers to “stand firm and hold fast to the traditions that you were taught, either by an oral statement or by a letter of ours” (italics mine) — again, no mention of checking facts in the Bible. In 1 Cor. 11:2 Paul praises the church “because you…hold fast to the traditions, just as I handed them on to you.”

We know that according to Paul’s own testimony, everything he learned about Jesus and the Church was from Jesus himself — see 1 Cor. 11:23. It is the only way he could quote Jesus as saying “It is better to give than to receive” (Acts 20:35), because this quote is nowhere to be found in any of the gospels.  In fact, Paul’s instruction on the celebration of the Eucharist itself (1 Cor. 11:23-26) pre-dates any of the gospels. Paul then goes still further and tells the young bishop Timothy to entrust to faithful people that which he (Timothy) heard from Paul even by way of “many witnesses” (2 Tim. 2:2).

For a good article explaining still more about Tradition, go to this site: http://www.catholic.com/tracts/scripture-and-tradition

The Right to Interpret

As I stated in my first article on the holy order of bishops, I am glad that my salvation does not rely on my own interpretation of Scripture.  If self-interpretation really were of the Holy Spirit, then 100% of the people would necessarily arrive at the same interpretation 100% of the time for “God is not a god of confusion” (1 Cor. 14:33). But God is one…Truth is one. And as I said then…Thank-you, sweet bishops, for all you do!