Eight Things To Love About the Catholic Church Part 6: Our Life in the Sacraments 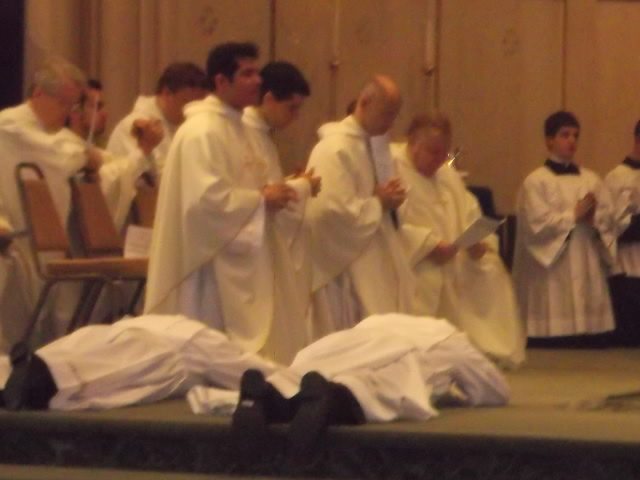 Last week we looked at five of the seven sacraments of the Church.  This week I shall explain about the two great sacraments of ministry:  Holy Orders and Holy Matrimony.

Holy Orders are the second level of the three ordained functions within the ministry of Jesus Christ. The first level is ordination to the Diaconate (from Diakonos/Diakonoz), meaning one who serves.  Deacons may not hear Confessions nor confect the Holy Eucharist. During the sacred Liturgy his function is as minister of the cup (chalice). Permanent deacons may be married—but the marriage must come first. If his wife dies, he may ask to enter into the priesthood but he must begin anew his seminary training.

The third level of sacred ministry is that of Bishop (from Episkopos/Episkopoz), which loosely means overseer.  I say “loosely” because his role is so much more.  His is the fullness of the priesthood…he is truly Vicar of Christ according to Lumen Gentium #27.  All priests must be ordained by a bishop; all bishops must be ordained by three bishops. For an eye-opening experience on the continuity of the Church in terms of Episcopal lineage/apostolic succession, go to this site, and find your bishop’s name.  Read who consecrated him and then follow the line backwards…all the way to the 1500’s—likely when formal records were first kept. Even today 95% of priests and bishops (even Pope Francis) trace their apostolic heritage through Cardinal Rebiba.  His was a time of great battles amongst the various Italian states so it is no surprise that records prior to him are scant, if any.

The second level of sacred ministry is the priesthood (from Presbyteros/Presbutepoz), meaning elder or priest. Priests are “ordained for sacrifice”—a term all Protestants took out of their ordination rites many years ago because they do not believe that the Eucharist is a sacrifice…they believe it to be symbolic only.

Sacred ordination is one of the three sacraments that leaves an indelible mark on the priest’s soul (the other two are Baptism and Confirmation).  He is, according to the rite of ordination a “priest forever”.

When priests are ordained, they marry their cherished spouse the Church in imitation of Jesus Christ who laid down his life for her.  Through that marriage they infuse life into the Church which the faithful lovingly receive, nurture within and bring forth to new life among God’s holy people and for the salvation of all the world. It is the reason he remains celibate—his bride is the Holy Catholic Church.  In union with Jesus and by the power of the Holy Spirit he makes Jesus truly present—Body, Blood, soul and divinity—at each and every Mass that he says. Jesus himself affirmed celibacy after Peter complained about giving up everything to follow Jesus.  Jesus’ reply to Peter was that there was “no man who has left house or wife or brothers or parents or children, for the sake of the kingdom of God” (Lk 18:29) who would go unrewarded.  Although Peter clearly was married at the time Jesus called him to follow him, (Jesus had healed Peter’s mother-in-law)…Peter’s mother-in-law would not cease to be his mother-in-law because he did not divorce her—but only set his sights and heart on the kingdom of heaven.

Jesus further affirms celibacy when he tells his apostles that “there are eunuchs who have made themselves eunuchs for the sake of the kingdom of heaven” (Mt. 19:12) while also stating that “not all men can receive this precept, but only those to whom it is given”. Therefore celibacy is a gift.

Not so long ago my family’s Assembly of God community had five pastors which meant salaries to take care of five wives, many children, five mortgages, cars, college tuitions, etc.  When the time came for them to search for a new head pastor it was determined that his family would always come first, so in times of family crisis the pastor would need to break church engagements to take care of a spouse, child, or in-law. His “interests are divided” (1 Cor. 7:32). On the other hand, when a priest in any diocese dies, the bishop is free to quickly send another priest to take his place without it being a cause of concern or hardship for any wife, child(ren) or mortgage.

Some Protestants make the claim that priesthood is no longer necessary but it was never done away with. Paul speaks of his “priestly service of the gospel” in his Letter to the Romans in 15:16.  All priests serve in the one priesthood of Jesus Christ and not something outside of it. Valid words as said by Jesus and valid matter—”wheat alone” (Canon Law #924, ¶2) for the hosts and “natural wine”—must be used. Most Protestants use grape juice and one or two faith communities use water. For a priest to use hosts made of rice or other grain/seed is to make communion invalid; indeed nothing at all happens…no transubstantiation.  It simply remains as rice and does not become the Precious Body of Jesus.

Holy Matrimony is the sacred act by which one man and one woman enter into a sacred covenant in order to become co-creators with God. They, too, bring forth new life for that is what the relationship is all about.  In imitation of God who infuses life into all things and a priest who mystically infuses life into the Church, so it is the male—the father—who implants life into the body of the woman who receives that life, nurtures it within and brings it forth.  This is why we address God as “Father” for from him all things have their origin.  In human reproduction, too, it is through the male that all of life has its origin.  He then is also called “Father”.

The roles of male and female, of course, are different…but complimentary.  Two males cannot give life one to another and two women cannot receive life one from another.  For there to be new life which springs forth from that deep and intimate union there must be one of each.  Jesus himself stated that the two—male and female—become “one flesh”.

Marriage is meant to be for “the good of the spouses and the procreation and education of children” (Canon Law #1055).  Marriage is so important that “It is strongly recommended that those to be married approach the sacraments of penance and the Most Holy Eucharist so that they may fruitfully receive the sacrament of marriage” (Canon Law 1065, ¶2).  It is only the Catholic Church and the Eastern Orthodox Churches that see marriage as a sacrament.  No Protestant community does.

All dioceses have forms they use as part of the interview process/journey with the couple.  Two of the most important questions that it asks are these:

“The Catholic church teaches that marriage is a permanent union to be entered without reservation or intention of divorce. Do you intend the marriage to be such a marriage?”

“The Catholic Church teaches that persons entering marriage must mutually exchange the right to have children of this union (italics mine). Do you intend to give your spouse this right?”

Indeed, that second question comes straight from Sacred Scripture:  “The husband should fulfill his conjugal duty toward his wife, and likewise the wife toward her husband. A wife does not have authority over her own body, but rather her husband, and similarly a husband does not have authority over his own body, but rather his wife. Do not deprive each other…” (1 Cor. 7:3-4).

All men and women are made in the “image and likeness” (Gen. 1:26) of God; therefore all people are holy.  This is why the Church in her great wisdom insists that the sacred covenant of marriage takes place before the procreation of children.  It is the same with a priest.  He must be validly ordained by a bishop before he is able to say Mass and to make Jesus present in the Eucharist.   A couple must be validly married with a solemn blessing by the priest before a sacred act—the pro-creation of children.

Because all sacraments are for the people of God and not just for the ones receiving them (the marriage will be lived out in the community and in the Church and not just in the home) then the wedding must take place in a church and not in Aunt Martha’s rose garden or onboard ship.

In the original Greek, the term for “gift” that Paul uses in speaking of marriage is Charisma/Carisma—making it a spiritual gift of the Holy Spirit, just as priesthood is (see 1 Cor. 7:7) . Therefore both Holy Orders and Holy Matrimony give powerful testimony to our loving God who gives such gifts.

This article is part of a series. Check back for new articles every Tuesday.