Eight Things To Love About the Catholic Church Part 5: The Great Gift of the Sacraments

Cynthia Trainque May 5, 2015 No Comments 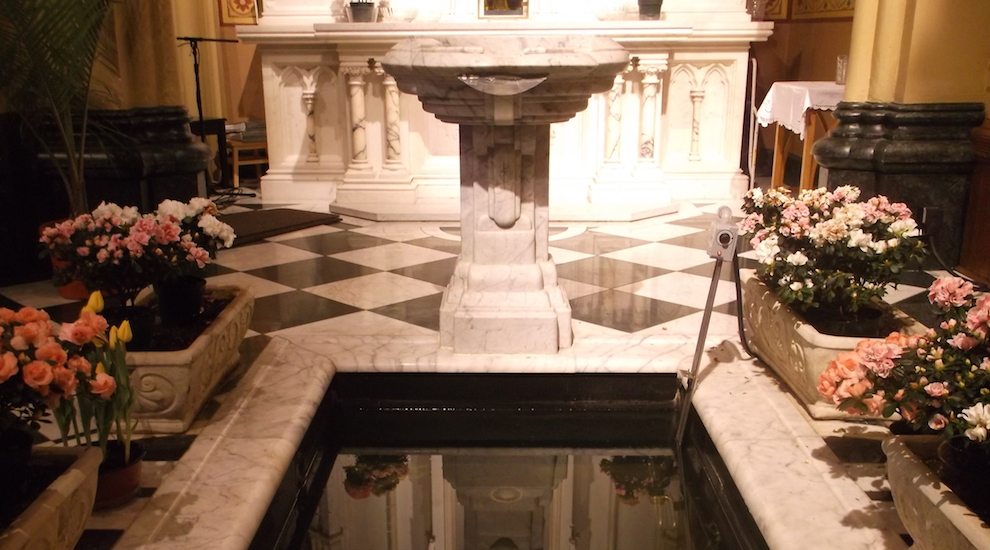 Seven sacraments—seven great gifts of love from God to his Holy Church.  Anyone aged 50 and over can easily recall from their Baltimore Catechism: “A sacrament is an outward sign instituted by Christ to impart grace”.

Within the Christian family of believers only Roman Catholics and the various Eastern Orthodox churches have seven sacraments. Most Protestant communities have two — baptism and communion; a few observe only baptism or only communion. While the Latin word for sacrament (Sacramentum) is not in Scripture, its Greek translation is: “Mysterion” (mysteries). They have been entrusted by God to the Church by way of the holy apostles and their successors, the bishops as Paul states in 2 Cor. 4:1 — “Let a man regard us in this manner, as servants of Christ and stewards of the mysteries of God”.  From there, bishops can appoint presbyters (priests) to administer most but not all of the sacraments.

An “outward sign”— physical rites within the Church.  Most are imparted by way of the sacred Liturgy. The Sign of the Cross, anointings, blessings and other actions performed by a priest with particular words/prayers.

“Instituted by Christ” — we make the invisible visible by the power of the Holy Spirit.

“To impart grace” — because of the presence of the Holy Spirit in each of the sacraments they do give life-giving grace to those who partake of them.

Here we should carefully note that all sacraments are considered as “Ex Opere Operato” which means that they are efficacious (effective) simply by manner of their being performed and not because of any level of holiness/righteousness by either the priest or by the recipient.  A priest who may be only luke-warm hearted in his ministry still administers the sacraments validly because it is God himself who effects the sacraments by means of the priest and does not originate from the priest himself.

The Sacraments of Initiation

Baptism, Eucharist and Confirmation. In Baptism water is poured three times over the head of the candidate. He/she is then anointed with sacred oil and is rendered a member of the “priesthood of all believers” and is thus able to assist in offering the sacred Liturgy with the episcopos/bishop and/or presbyter/priest. Catholics, Eastern Orthodox and many Protestant denominations baptize according to Jesus’ mandate: “In the name of the Father and of the Son and of the Holy Spirit” (Mt. 28:19). Some baptize in Jesus’ name only, even while using this same citation of Matthew as well as Acts 19:5.

Baptism leaves an indelible mark upon a person’s soul and can never be undone or repeated. It also forgives sins, according to Acts 2:38, but many Protestant communities reject this even though it is clearly biblical. It also “now saves you” according to the chief apostle himself in 1 Pet. 3:21. In the Catholic Church, in all Eastern Orthodox churches and in most mainline Protestant communities (Anglican, Episcopalian, Lutheran, Methodist, some Presbyterians and Congregationalists) infant baptism is insisted upon unless an adult elects to become a member of that community. Even at that, the various churches accept each other’s baptism if it was according to the Trinitarian formula.

The idea of being baptized as adults (Believers’ Baptism) only came about in the 16th century with the Anabaptists — a term meaning to re-baptize. Amish, Mennonites, the Assembly of God and many others reject infant baptism and thus require adult baptism for all of its members. For their children they use a ceremony called “baby dedication” in imitation of Joseph and Mary bringing Jesus to the temple to dedicate him. Yet, that act was only for first-born sons who opened the womb…not for females or even second, third, fourth-born, etc. sons because the father had to declare “This is my first-born son of this wife” (see Ex. 13:13-16 and Num 3:45-47).

In the Old Testament it was God himself who decreed that all male children be circumcised at the age of eight days old even though clearly they are incapable of choosing it for themselves; it was important, though, for circumcision made one a member of the sacred covenant with God (Note:  circumcision does not make a person Jewish…they are born Jewish or convert into the faith).  It was unheard of in the days of Jesus and the early Church (and for 1500+ years) for a person to choose his/her own faith because women and children were seen as mere possessions and incapable of deciding when they wanted to be baptized.  It is the primary reason entire households were baptized together.  Even though Jesus himself was baptized as an adult, he was not baptized into anything.  Nor did he need baptism — his holy presence in the water blessed the action of baptism and fulfilled the baptism of John by bringing it to a new level.

This sacrament completes baptism and it is the occasion when the baptized are able to definitively choose the Church for themselves. Like Baptism it also leaves an indelible mark on one’s soul that cannot be undone. The seven-fold gifts of the Holy Spirit are given at Confirmation: fear of the Lord, piety, knowledge, understanding, counsel, wisdom and fortitude.  The Bishop confirms each candidate individually with the same nine words “Be sealed with the gifts of the Holy Spirit”. Why is a Bishop the one who confirms?  In the early Church the Bishop administered all the sacraments as well as offered the weekly Mass.  However, the Church grew very quickly both in size and geographically making it impossible for him to cover everything.

The saying of Mass and administering baptism was given over to the priests who served within the priesthood of each individual Bishop but because Confirmation is the sacrament that completes the initiation of a candidate into the Church it is still reserved to the Bishop.  Local pastors may Confirm at the Easter Vigil (again, for sheer numbers) but pastors who receive people into the church outside of the vigil must have the Bishop’s expressed permission. For more on Confirmation go here:http://catholiceducation.org/articles/religion/re0451.html

Food of all foods, Bread of all breads.  I have covered this Holy Sacrament in my second essay of this series here.

The Sacraments of Healing

The Sacrament of Reconciliation (Confession) and the Anointing of the Sick.  About Confession the question is often asked, “Why confess your sins to a priest…why not just go to God?” One reason is for humility and not an act of presumption that God has forgiven the sin(s). Many Protestants who go direct to God oftentimes admit to being unsure as to whether God has truly forgiven their sins…or even heard their request for forgiveness.  While Jesus did say to the apostles that “Whose sins you forgive are forgiven them” (Jn 20:23) many Protestants seem to be unaware that Jesus also said “whose sins you retain are retained.”

In order for them to be forgiven or retained they must be heard. Thus three things are necessary before the priest can give absolution:  true repentance of sin(s), a firm intention to “avoid the near occasion of sin” (Act of Contrition) and a form of penance.   The other thing about confessing through a priest is that St. Paul makes clear in 1 Cor. 12:25-26 that “if one part of the body hurts, every other part hurts and is involved in the healing.”  This is also true spiritually. Therefore sin not only affects our relationship with God but with others as well.

When Jesus appeared to his apostles and spoke to them about forgiving and retaining sin he first breathed on them and said, “Receive the Holy Spirit.” Outside of placing the breath of life into mankind (Gen. 2:7), it is the only time that Jesus breathed on the apostles.

And isn’t there really only one kind of sin rather than the idea of mortal sin?  Why differentiate?  We do so because the apostle John said so: “If anyone sees his brother sinning, if the sin is not deadly, he should pray to God and he will give him life. This is only for those whose sin is not deadly. There is such a thing as deadly sin, about which I do not say that you should pray.All wrongdoing is sin, but there is sin that is not deadly” (1 Jn 5:16-17). Stealing twenty dollars from someone’s purse cannot be elevated to the level of murder…nor can murder be equated to the level of stealing twenty dollars.

The Sacrament of the Sick

“Is anyone among you suffering? He should pray. Is anyone among you sick? He should summon the presbyters of the church, and they should pray over him and anoint [him] with oil in the name of the Lord,and the prayer of faith will save the sick person, and the Lord will raise him up. If he has committed any sins, he will be forgiven” (James 5:13-15). How good it is that this great sacrament exists.  Formerly called Extreme Unction because it was the last of four sacraments that use the oil of anointing (Baptism, Confirmation and Holy Orders are the other three), it is now administered to those who are seriously ill or facing surgery and no longer reserved for a person who is very close to death. Therefore it is possible for a person to receive this anointing more than once in life. Incorporated in this sacrament is the sacrament of reconciliation — therefore it is one of sacraments reserved to the priest. The others are Confirmation (unless it is the Easter Vigil or the priest has special permission from the Bishop), the Sacrament of Reconciliation, and Holy Orders.

This article is part of a series.