Work: A Foretaste of Heaven

Jesus told several stories about a father with two sons, maybe because they so clearly illustrate the Two Ways of the spiritual life (cf, Ps 1).

In one such story, a father asks his two sons to help him with farm work—Boy, does this sound familiar! The first son answers, “I will not,” but afterwards, he regrets it and helps. The second son replies, “I will, sir,” but then does not help. Jesus then asked his audience (the chief priests and elders who were challenging his authority to teach), “Which of the two did the will of his father?” (Mt 21:28-32).

The correct answer is the first son, and in many ways this represents most of us who later repent of our earlier rebellions and by grace move back in line with the Father.

But last Saturday I was thinking about that well-meaning second son.

It was a beautiful cool Saturday morning. I was starting a project to which I had been looking forward: trimming the front bushes. This is an annual affair, and there’s just something inexplicably rewarding about the artistic creativity of using hand clippers to sculpture an out-of-control hedge into a pleasing, orderly, large green lozenge.

As I began, a well-meaning neighbor stopped by and offered me the use of his large heavy-duty electric hedge clippers. Pointing to his already completed 50-yards of hedge, he claimed that with his clippers, I could be done in fifteen minutes with hardly any sweat or effort.

For a second I was greatly tempted, but I thanked him and said that I really enjoyed doing this by hand, and besides, I was in no hurry. If I got it done in fifteen minutes, then what would I do? So, I refused his offer, and let him return to his own long list of chores.

I returned to my task, which I had previously been enjoying thoroughly, but now, I noticed that the sun was getting hotter. I began to sweat and weaken; my arms began to ache like trying to hold a bowling ball suspended in the air. So, I took a break, and increasingly my words to my neighbor began to haunt me: “No thanks…I’m in no hurry…I enjoy doing this by hand…besides, if I get it done, quickly, then what will I do?” 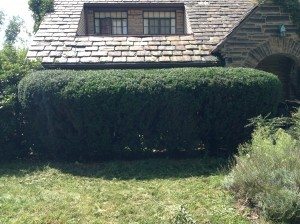 A long list of other things, including the first televised college football games of the season (!) began bombarding my mind. But I dutifully dragged myself back out to work, and soon my breaks came quicker and lingered longer. Soon I was needing to use the ladder, and my knees began quivering like a sewing machine, and the noon sun sent sweat dripping down my glasses. Eventually I could stand on the ladder with the clippers raised for only a few minutes at a time before I needed to return to my chair in the shade for a sip of my beverage of choice.

After five hours, give or take, I did it. I had trimmed all the front bushes, and, as I stood back admiring, it looked almost as if the house was smiling—or was it smirking?

The reason I thought of that second son was because many of us begin with high expectations, but as soon as we commit ourselves, express to anyone our high sounding plans and motives, the inner battle begins. The world, the flesh, and the devil all join forces in the attempt to convince us to follow in the footsteps of that second son.

As Jesus warned, whenever we commit ourselves to follow HIm, rather than the world, we are inviting a battle. But the end is worth it. And besides, He never calls us to do it alone.

And another thought: one of the biggest myths of the 20th century is that “time is money.” It isn’t. Time is time. What you judge worthy of your time is your decision, not the voices of the world imposing their values upon you. If your use of time is always measured by how much you think you are worth per hour, or how much you can accomplish, then in the end you may discover that in your use of “time” you have accomplished little of lasting value and enjoyed even less of the beauty of the moment. If you only see work as something to get done and behind you, so you can move on to something else, then you will always miss the message God was intending to tell you in the work, and that message may have involved growing through suffering. The feeling of satisfaction when you sit exhausted in the shade, beverage of choice in hand, studying the progress of your work, is but a blessed foretaste of the joys of heaven.

Marcus Grodi is the founder and president of the Coming Home Network International, a lay Catholic apostolate whose mission is helping Protestant clergy and laity come home to the Catholic Church. Marcus is also the host of The Journey Home program on EWTN.