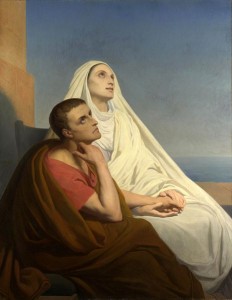 Today (August  27) is the Memorial of St. Monica, the mother of the famous St. Augustine whose feast is tomorrow.  In book 9, chapters 10 and 11, of his Confessions, Augustine tells us of the last days of his mother’s life. It is one of the most moving tributes of a son to his mother that we have from the ancient world. Monica was a simple, uneducated woman of Punic origin who married a Roman man named Patrick (Patricius) but her love compelled her to seek the best education for her son Augustine. As a young man, Augustine was lured by the hope of fame and fortune offered to orators (lawyers) of his day. Eventually, he moved to Milan from North Africa as the court orator.  Monica’s love for her son, however, moved her to pray constantly for his conversion.

Monica’s death reminds us that the longing of the Christian soul is always for heaven. Augustine relates that, in her last days on earth, he and his mother spoke continuously about eternal joys, about those things which “eye has not seen, nor ear heard, nor even into the human heart.” Their conversation was animated by a panting for the refreshing waters of the fount of life who is Christ.  In the end, Monica says to her son, “There was only one thing for which I wanted to stay a little while in this life and that was to see you become a Catholic Christian before I died. God has granted me that abundantly so that you are now his servant who feels only contempt for earthly happiness. What else is there for me here?”