500 Years After the Wittenberg Door 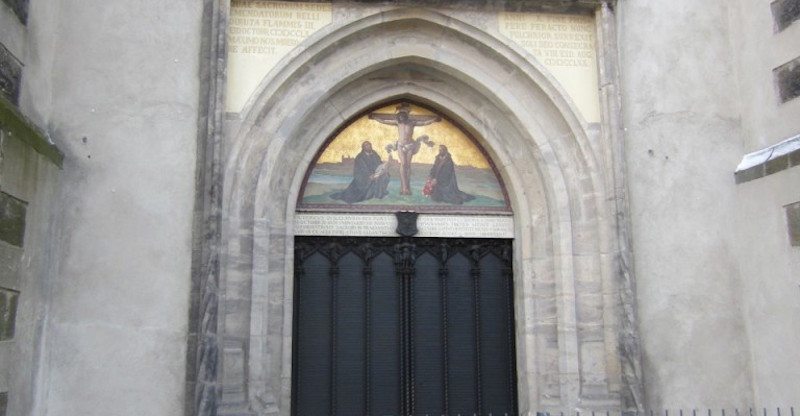 For over fifteen years, the anticipation of an important anniversary has inspired much of our work. By God’s grace, Jim Anderson (CHNetwork’s Senior Advisor and long-time coordinator of our ministry with non-Catholic clergy), is sojourning for an extended period in Germany. This is opportune, for it provides us with “eyes on the ground” to share reflections on the anniversary of the Protestant Reformation — and its impact on us today. This month, Jim gives us an inside look at the preparation for this coming event.

People observe anniversaries as milestones in their lives to remind them of where they have been and how far they have progressed. Anniversaries also help us to remember, to contemplate the events of the past. At the end of this month, we will be arriving at one such milestone. October 31st will be the 495th anniversary of the nailing of the 95 Theses on the door of the castle church of Wittenberg by Fr. Martin Luther, the event that began the rupture with the See of St. Peter and the creation of Protestantism. 2012 is only a preliminary to the greater celebration planned by many of our Protestant brothers and sisters for the 500th Anniversary on October 31, 2017. Preparations are already under way across Germany for this event. Banners are being hung from churches, books are being published, festivals and concerts are in the works.

Recently, I’ve had the opportunity to observe first-hand some of the preparations being made in Germany to celebrate 500 years of Protestantism. 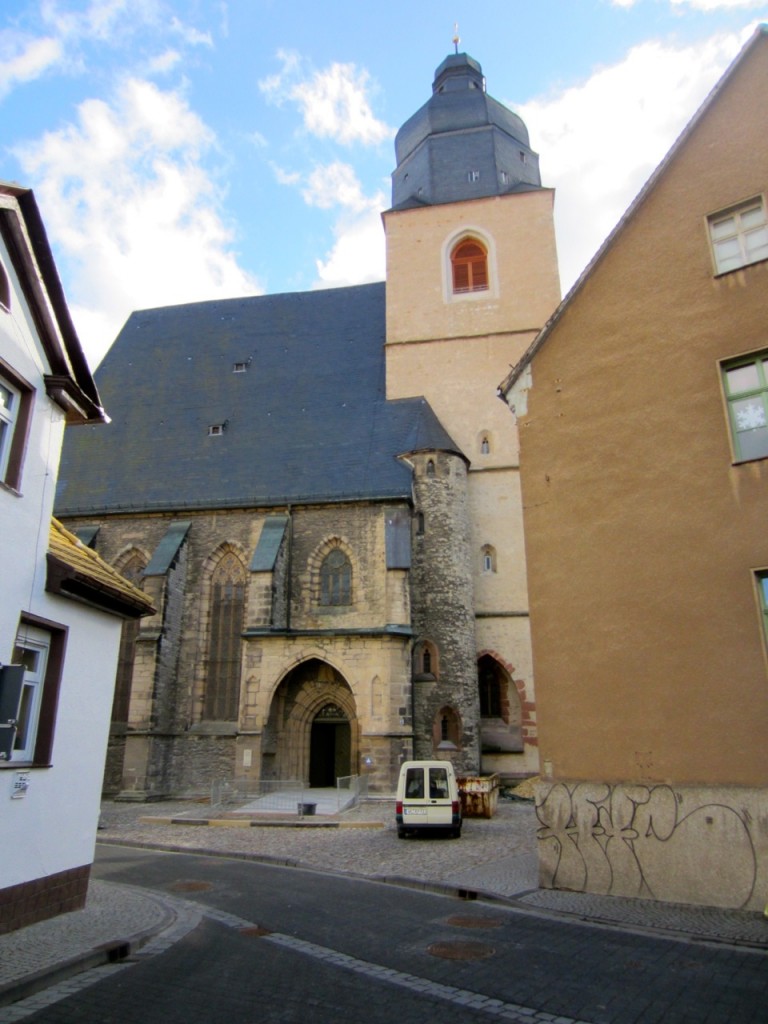 The home where Martin Luther died in 1546 is being completely restored and will soon have an attached modern building with museum exhibitions and educational programs. 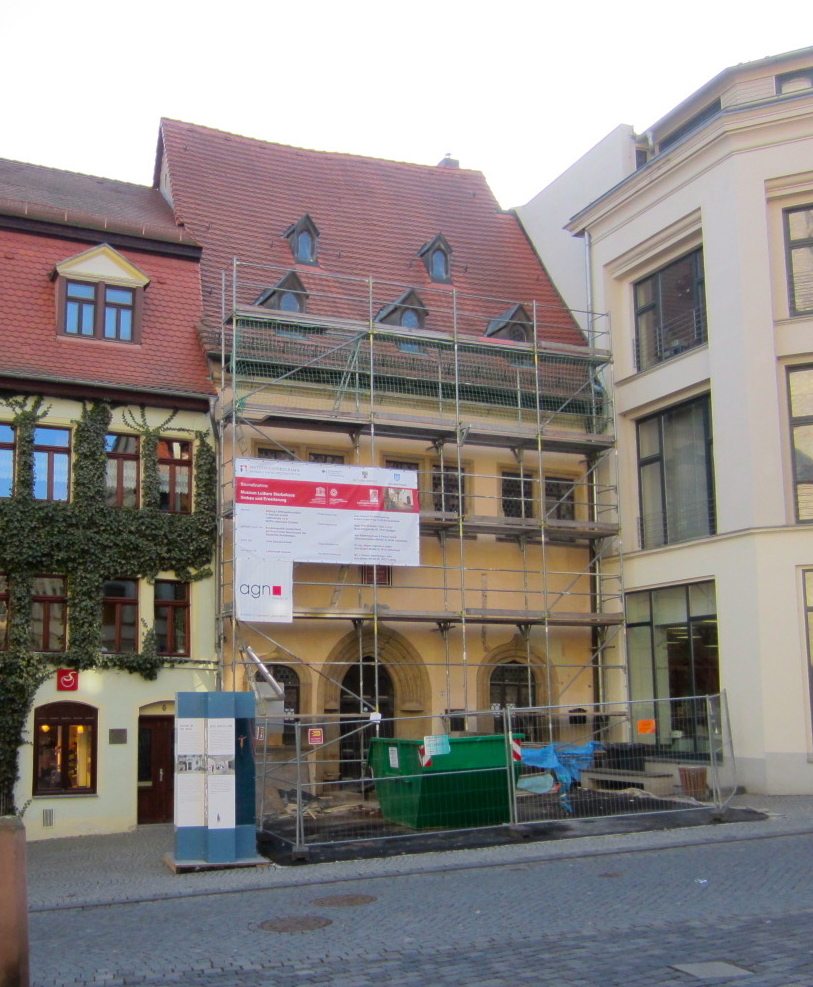 The “Death House” of Martin Luther

The city of Erfurt, was central to the early formation of the young Luther. Here he entered the religious life, attended university, and was ordained a Catholic priest. 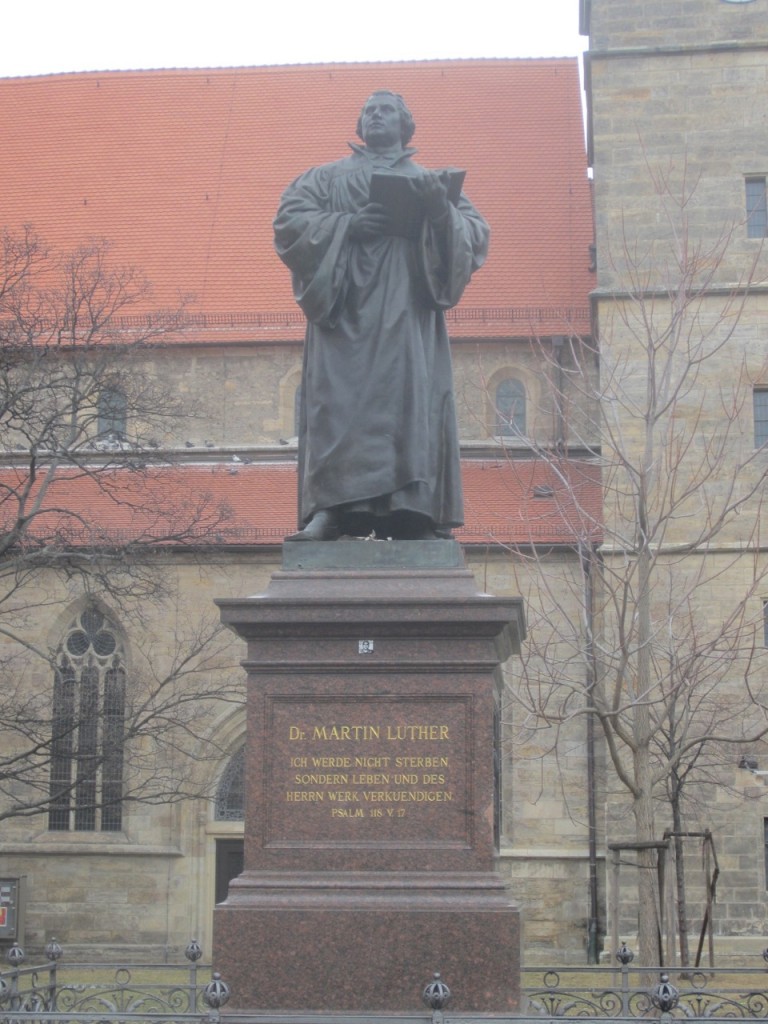 Luther memorial in Erfurt. Translation: Dr. Martin Luther “I will not die but live and proclaim the work of Lord,” Ps. 18:17. 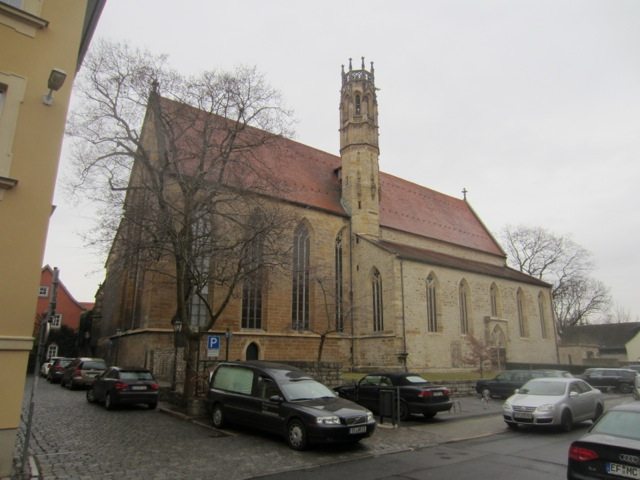 The Erfurt Augustinian cloister. Here Luther entered the religious life in 1505 and took vows to serve God in poverty, chastity, and obedience.

Wittenberg, now officially “Lutherstadt Wittenberg,” is busily preparing for the arrival of pilgrims who will visit the city to commemorate the 500th anniversary of the Reformation. In the 16th century, Wittenberg had recently been made the capital of Electoral Saxony by Fredrick III “the Wise”. He founded the University of Wittenberg in 1502 and invited the Augustinian monks to staff its faculty. In 1508, Fr. Luther arrived here to be a professor of theology and Holy Scripture. 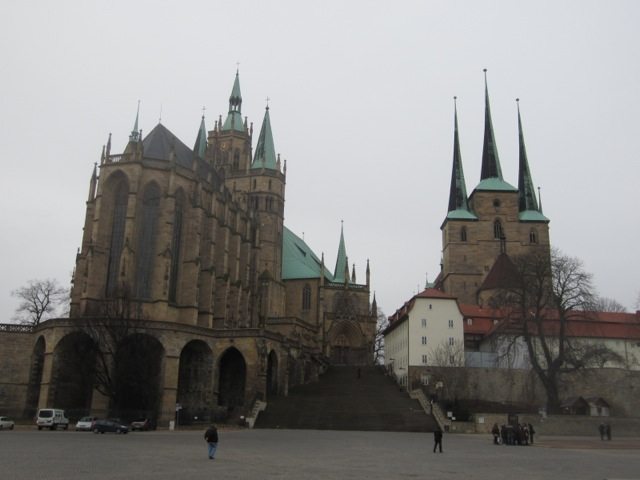 Erfurt Cathedral where Fr. Martin Luther was ordained a Catholic priest in 1507.

The main parish church of St. Mary, built between 1280 and 1439, is undergoing thorough repairs and renovations. In this church the first Lutheran liturgy was celebrated in German rather than Latin. It was also where Luther preached over 2,000 sermons and baptized his children.

Other monuments and buildings in Wittenberg are also being restored in preparation for the coming events. The home of Philip Melanchthon, Luther’s most important colleague and the author of the Augsburg Confession, is covered in scaffolding, undergoing restoration both inside and out. 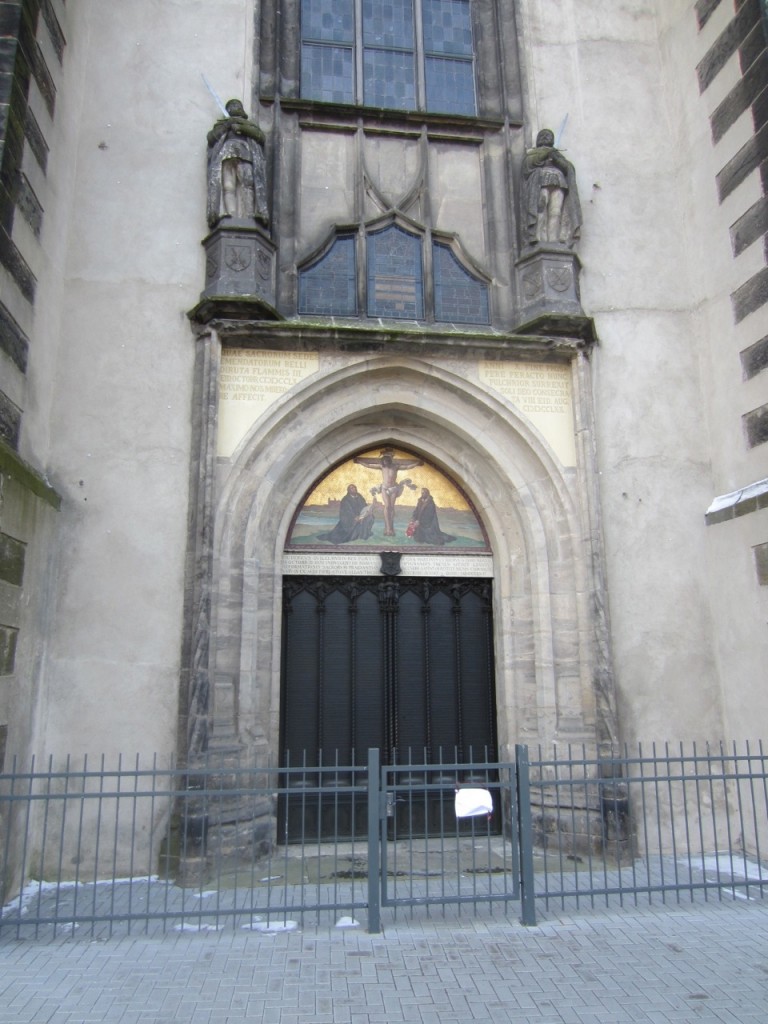 Door to the Castle Church of All Saints, with the 95 Theses in bronze.

Since 1994, Wittenberg has hosted an annual three-day festival in June celebrating Luther’s wedding to the former nun Katharina von Bora. This event draws crowds of over 100,000 people to a Renaissance fair where they enjoy music, speeches, food, and beer. 2,000 people participate in the Marriage Parade in which a local couple portrays Dr. Luther and Katharina as guests of honor.

It is a sorrow that the religious significance of Martin Luther’s marriage is lost to the vast majority of the people at this annual festival. Nearly 500 years after Luther began the movement that would separate millions from the unity of the Catholic Church, most Germans in Saxony no longer believe in the existence of God. Maybe over 80% of the people in the region where Luther once lived (which was more recently communist East Germany) are not baptized Christians, Lutheran or Catholic.As we, both Protestant and Catholic Christians, prepare to commemorate, in different ways, the 500th anniversary of the Protestant Reformation over the next few years, we need to keep in mind the desire of our Lord Jesus Christ for His Church “. . .that they may all be one; even as thou, Father, art in me, and I in thee, that they also may be in us, so that the world may believe that thou hast sent me” (Jn 17:21). As our separated brothers and sisters celebrate “freedom from Rome,” may we turn our hearts to God through our Lord Jesus in conversion of heart and repentance of our sins so that the Holy Spirit may heal the divisions of 500 years allowing the world to see and accept the Truth in Love. . . Ut Unum Sint.