How Not to Become a Catholic Part 3: Unity & Schism 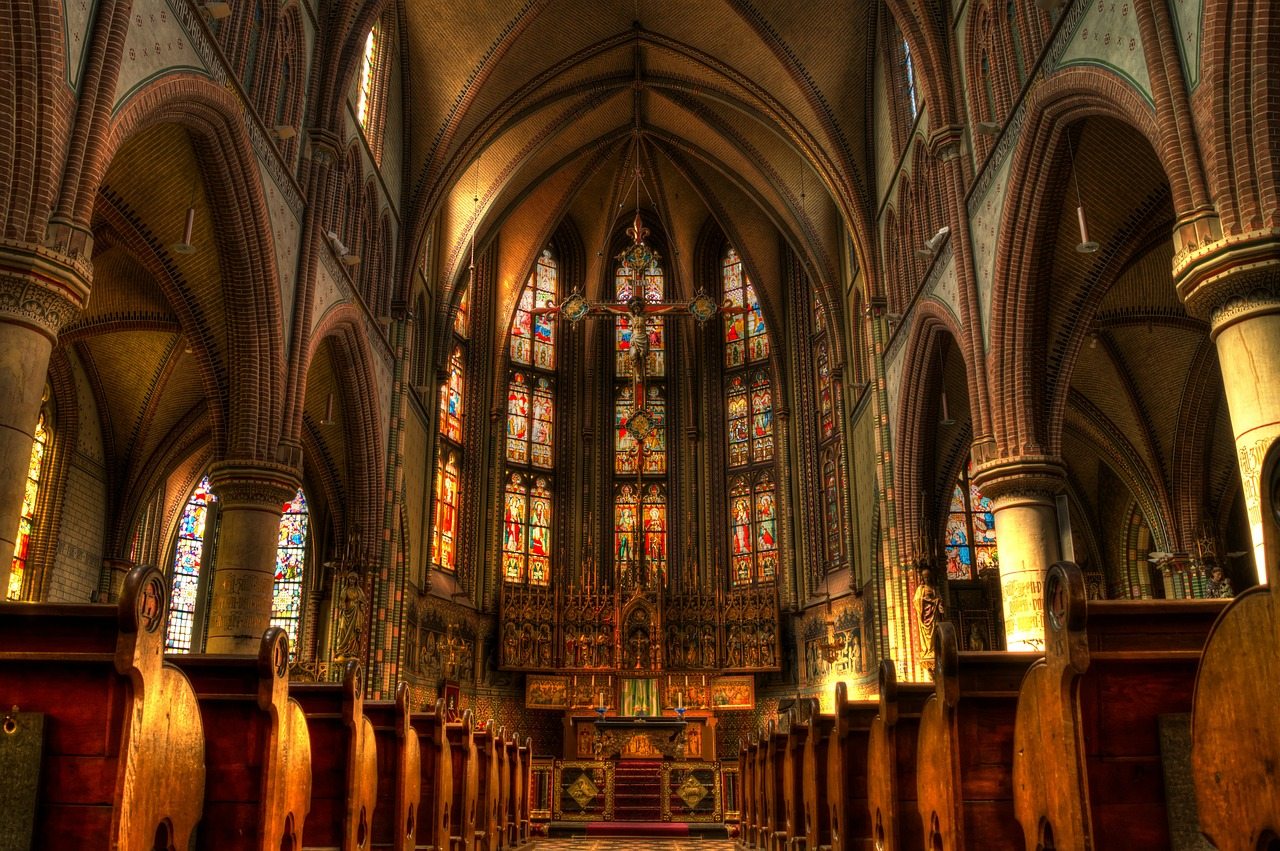 One thing many people can’t quite get their heads around is the Catholic Church’s claim that there is one Church founded by Jesus and that one this Church, according to the Second Vatican Council (1962-1965), “constituted and organized as a society in this present, world, subsists in the Catholic Church, governed by the Successor of Peter and by the Bishops in communion with him.” Or as Richard John Neuhaus liked to put it, “The Catholic Church is the Church of Jesus Christ most fully and rightly ordered through time.”

A surefire strategy for keeping that claim at bay is to defend the legitimacy of the multitude of Protestant churches and denominations as perfectly normal, part of God’s will, and having nothing whatsoever to do with the terrible sin of schism.

Rule #6 — If You’re an Evangelical, Ignore the Sin of Schism Altogether

A castaway had been marooned alone on a tropical island for more than ten years. Now finally a boat had landed on the island’s shore to rescue him. “How have you managed all these years,” asked the officer in charge.

“Let me show you,” the castaway replied and he gave the officer a tour of what had been his home all those years.

“Oh,” said the castaway dismissively and with distain in his voice, “that’s my old church.”

“Schism” is a word I never heard in evangelical circles. And in your struggle to avoid the Catholic Church, it’s a word you should completely forget. Evangelicals, it seems to me, have Protestantism figured out. It’s consumer-driven, free market, entrepreneurial Christianity. If you don’t like your church, find one that suits you better. Not only is there nothing wrong with that, but you probably owe it to yourself and your spiritual wellbeing—or at least to your kids’ spiritual wellbeing. Heaven forbid that they should attend a youth group with an inferior worship band.

If there are no congregations to your liking, feel free to start your own. The folks in your old church may be disappointed or angry. They may call you a “sheep stealer,” but it’s very unlikely they’ll accuse you of the sin of schism or call you a schismatic.

Those pesky Church Fathers (see Rule #4 [3]) had a very different take on divisions in the Church. St. John Chrysostom (347-407) wrote, “I say in private and in public that to tear the Church apart is no less an evil than to fall into heresy.” Not to be outdone, St. Augustine put it this way: “There is nothing more serious than the sacrilege of schism because there can never be any just need for severing unity.” Methodism founder John Wesley (whose heirs we’ll get to in a moment) preached [4]:

[Schism] is evil in itself. To separate ourselves from a body of living Christians, with whom we were before united, is a grievous breach of the law of love…. And as such a separation is evil in itself, being a breach of brotherly love, so it brings forth evil fruit; it is naturally productive of the most mischievous consequences…. It gives occasion to offense, to anger and resentment, perhaps in ourselves as well as in our brethren; which, if not presently stopped, may issue in bitterness, malice, and settled hatred; creating a present hell wherever they are found, as a prelude to hell eternal.

But free-for-all schism has been the order of the day since the Reformation opened the free-market more than five hundred years ago. Think 25,000+ Protestant denominations, assorted cults claiming the Bible, and countless independent churches. Jesus prayed in John 17 that his people be one even as he and the Father are one. Somehow I can’t imagine that he meant what we experience today. In fact, in light of that prayer, the current state of disunity seems monumentally sinful.

But unless you keep “schism” out of your vocabulary and “sin of schism” out of your thinking, you could end up thinking about Church unity. That could then lead you to affirm that it makes biblical sense that there should be “one, holy, catholic, and apostolic Church.” And I don’t need to tell you which Church best fits the bill.

Rule #7 — If You’re in the Protestant Mainline, Assume that Schism is Somebody Else’s Sin

If you’re a Mainline Protestant you’re nodding your head about those fractious evangelicals. Churches and the covenants that bind members are sacrosanct. You would never, never, ever commit the sin of schism. That’s what other people do.

So, for example, when I was president of the Institute on Religion & Democracy, a group reporting on the political shenanigans of the Protestant Mainline churches, I was regularly denigrated as a “schismatic Presbyterian” by the organizations many critics because I was ordained by the Presbyterian Church in America (PCA), a denomination that broke away from the mainline Presbyterian church in 1973.

And while it’s true that the PCA has a schismatic relationship to the mainline/oldline denomination, “schismatic Presbyterian” remains the dumbest thing I’ve ever been called.

Somehow my detractors managed to forget that all Presbyterian churches got their start with the English Puritans who were dissenters (that is, people in schism) from the Church of England. And the Church of England was itself born of schism from the Catholic Church; a schism brought about not by lofty theological conviction or vital spiritual renewal, but by Henry VII’s empty coffers and bursting libido.

The idea of any Protestant fussing and fuming about schism is laughable since Protestantism is by definition (note the name) schismatic—and typically darned proud of it. The Episcopalian bishops who occasionally attempt to guilt disaffected clergy and laity to stay in the denomination by proclaiming, “Schism is a greater sin than heresy,” are either disingenuous or delusional—unless they’re making plans to return to Rome, which they’re not.

Having said that, let me make it clear that I have great affection and admiration for friends in the mainline renewal movements. They are courageous folks who stay in their decaying denominations often at great personal expense and attempt to turn them back to God and to the Gospel. While I sympathize, their arguments against schism and for unity are, it seem to me, either an appeal to sentiment or based on an unreasonable claim about their denomination.

An elderly woman I know made the sentimental appeal this way. She detested the pastor of her mainline Presbyterian congregation for his revisionist theology and what she viewed as shady dealings. “Why not leave?” I asked.

Less piquant versions of the same argument come from pastors and theologians. This church baptized me, married me, and ordained me. I won’t leave it to those who will destroy it. Besides, as one renewal leader noted recently, “Churches are not reformed by people who have left them.”

Fair enough, but it’s hoping against hope. Decades of renewal activities in the Episcopal Church and Presbyterian Church (USA) costing millions of dollars and untold man-hours have delayed, but have not prevented the current theological and moral freefall. Many orthodox lay people and clergy have already gone elsewhere. The average age in the mainline denominations is now well over seventy with young people and dynamic, orthodox young clergy staying away in droves. And to top it off, research shows [5] that Protestants are more loyal to their brands of toothpaste and toilet paper than they are to their church denomination. Encouraging warm feelings and dogged commitment has no future.

The alternative is to claim that the existing denomination is, in a sense, Holy Mother Church. And so John Wesley vehemently argued that it was a sin to leave the Church of England to form a Methodist church. Today his heirs are arguing that it’s a sin to leave the United Methodist Church to form something new. Why? Because schism is such a grievous and grave sin and the existing denomination must be preserved at all costs. I agree that divisions in the Body of Christ shouldn’t be multiplied, but why not go back and heal the original wound? Rather than multiplying divisions, let’s get rid of them all.

Every year I tell my Reformation history class that Roman Catholicism is, at least in the West, the default position. Rome has a better claim to historical continuity and institutional unity than any Protestant denomination, let alone the strange hybrid that is evangelicalism; in the light of these facts, therefore, we need good, solid reasons for not being Catholic; not being a Catholic should, in others words, be a positive act of will and commitment, something we need to get out of bed determined to do each and every day.

Why, I wonder, would anyone get out of bed determined to continue in schism? Better to either remove schism from the list of sins or convince yourself that it’s someone else’s sin. The only other alternative will leave you with no good reason for being Protestant at all.

Jim Tonkowich holds a degree in philosophy from Bates College and both a Master of Divinity and a Doctor of Ministry in Christian Spirituality from Gordon-Conwell Theological Seminary. An ordained Protestant minister who was received into the Catholic Church in January 2011, Jim continues to write and speak on spirituality, worldview, and religion in the Public Square. More of his work can be found at www.JimTonkowich.com.