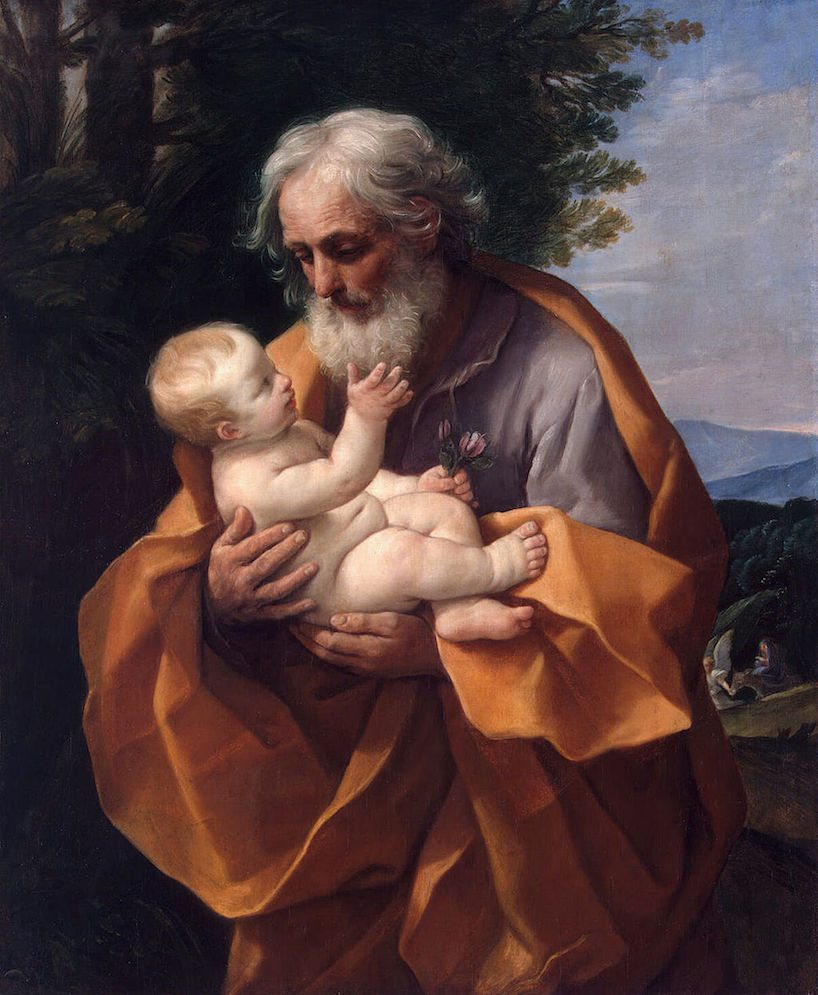 We are living in the beginning stages of the most extraordinary men’s renewal movement in the history of Christianity.  A sovereign wave of the Holy Spirit is moving in fathers’ hearts preparing them to cross the threshold into the third millennium. We are seeing a fulfillment of Malachi’s prophecy fulfilled before our eyes:

Behold, I will send you Elijah the prophet before the great and terrible day of the LORD comes. And he will turn the hearts of fathers to their children and the hearts of children to their fathers, lest I come and smite the land with a curse. (Malachi 4:4-5 RSV[CE])

What role will Joseph play in the restoration of fatherhood?  To discover the greatness of  Joseph’s fatherhood, we need to explore three key relationships in his life: that with Mary, with Jesus, and with the Heavenly Father.

Joseph was not the biological father of Jesus, yet Holy Scripture and the Mother of our Lord call him Jesus’ father (Luke 2:48).  How can this be?

The essence of  Joseph’s fatherhood, like all Christian fatherhood, grew out of the marriage covenant. This is why the genuine restoration of fatherhood in our day must include a primary emphasis on keeping the marital covenant.  When men ignore the problem of breaking that contract, it may make them feel better in the short run; yet it will abort any long-term success of the present renewal.  We cannot build up men if we allow ourselves to short-circuit the covenant through divorce. (Any doubters are urged to read Fatherless America by David Blankenhorn.)  Thus, fatherhood finds its origin in the marital covenant.

The profound oneness created by the covenant of marriage includes the complete and total sharing of goods.  For “marriage is the most intimate of all unions which from its essence imparts a community of gifts between those that by it are joined together” (Quamquam Pluries/On Devotion to St. Joseph, Pope Leo XIII, 1889). Mary shared with Joseph both her unique graces and the supreme good given to their marriage, namely the Christ child.

Joseph is the father:  his fatherhood is not one that derives from begetting offspring; but neither is it an “apparent” or merely “substitute fatherhood.” Rather, it is one that fully shares in authentic human fatherhood and the mission of a father in a family (Guardian of the Redeemer, Section 20, John Paul II).

It was the ancient Jewish custom for fathers to name their children. The Jewish people did not choose names lightly—they considered their  significance. St. Joseph received a divine command to name the child Jesus (Matthew 1:21).  In conferring the name, Joseph declared his own legal fatherhood over Jesus, and in speaking the name he proclaimed the child’s mission as Savior (Guardian of the Redeemer, Section 12).

As members of the New Covenant family of God, Jesus calls us  “brothers” (Hebrews 2:2-13). This brotherhood with Christ is not just an abstract, spiritualized notion. In the New Covenant we share a “flesh and blood” union with Christ our Brother through the Blessed Eucharist. Think about this!

If Jesus is our “brother”, then Joseph is also our “father.”  We have both an earthly and a heavenly father in the throne room of the universe.  We all have a tendency to underestimate the richness of the inheritance Christ shares with us in the New Covenant.  Do we realize that we have an exalted earthly father in heaven who cares for us as much as he cared for Jesus in Bethlehem, Egypt, and the carpenter shop in Nazareth?

That sacred household Joseph headed with the authority of a father contained within its limits the scarce-born Church.  In the same way that Mary is the mother of all Christians (whom she bore on Mount Calvary amid the supreme throes of the Redemption), Jesus Christ is the first-born of Christians, and we, by the adoption and redemption, are his brothers and sisters; the Blessed Patriarch looks upon the multitude of Christians who make up the Church as confided specially to his trust—this limitless family spread over the earth.  Because he is the spouse of Mary and the Father of Jesus Christ he holds, as it were, a paternal authority.  It is natural and appropriate that, as Joseph ministered to the needs of the family at Nazareth and girt it about with his protection, he should now defend and cover with the cloak of his heavenly patronage the Church of Jesus Christ  (Quamquam Pluries, Section 3).

To the thousands of men deprived of a healthy relationship with their fathers: Go to Joseph and ask for his prayers!  To those seeking to overcome a negative father image:  seek no further than Joseph for a potent cure.   To the millions of children in fatherless families:  Go to Joseph!  You will find an earthly father who, like the heavenly father, is a father of the fatherless.  The heavenly father has provided a link to himself through the fatherhood of  Joseph over the whole family of God.

Joseph’s Relationship with the Heavenly Father

Joseph has been called the “Shadow of the Father.” Like every father, Joseph was called to be a living image of the heavenly father to his child. Any father contemplating this high calling of  imaging the heavenly father might be tempted to despair because of personal inadequacies.  God is willing and able to abundantly provide for what he commands.  The calling to fatherhood is no exception.

Since it is inconceivable that such a sublime task would not be matched by the necessary qualities to adequately fulfill it, we must recognize that Joseph showed Jesus “by a special gift from heaven, all the natural love, all the affectionate solicitude that a father’s heart can know” (Guardian of the Redeemer, Section 8 quoting Pope Pius XII).

If, then, St. Joseph is not the father, how could he have the love of a father? It is here that we must understand the action of the power of God in this work.  As an effect of this power, Joseph has the heart of a father; and if nature does not bestow it upon him, then God gives him one from His own hand.  The same hand which forms each man’s heart makes the heart of a father in Joseph, and the heart of a son in Jesus.  God—the true Father of Jesus Christ, who generates Him from all eternity and having chosen holy Joseph to act as the father of His Son in time has in a certain fashion infused a ray or spark of the infinite love which He bears His Son. This changes Joseph’s heart, and gives him the love of a father  (Joseph and Jesus: A Theological Study of Their Relationship by Francis L Filas, quoting Bossuet an 18th century writer, p. 104).

God the Father’s plan is to do extraordinary things in the lives of ordinary men. Our problem is that our expectations of what God wants to do to us and through us as fathers are too small.  “Joseph had the heart of a father bestowed on him by the Eternal Father in the sharing of their common name” (ibid. page 95). Centuries ago the prophet Malachi told us to expect something miraculous to happen in the hearts of fathers. Can you dare to believe that God’s desire is to place within you the heart of a father as he did to Joseph?

For this reason I bow my knees before the Father, from whom every family in heaven and on earth is named, that according to the riches of his glory he may grant you to be strengthened with might through his Spirit in the inner man, and that Christ may dwell in your hearts through faith; that you, being rooted and grounded in love, may have power to comprehend with all the saints what is the breadth and length and height and depth, and to know the love of Christ which surpasses knowledge, that you may be filled with all the fullness of God. Now to him who by the power at work within us is able to do far more abundantly than all that we ask or think, to him be glory in the church and in Christ Jesus to all generations, for ever and ever. Amen.

Steve Ray was a Presbyterian pastor before he and his family were received into the Catholic Church in 1990. Their complete conversion story can be read in Surprised by Truth.