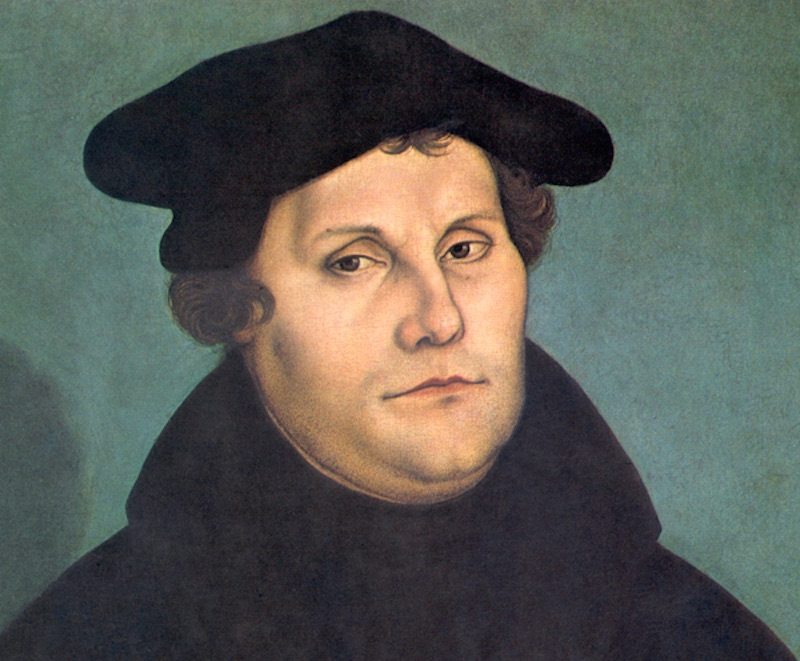 Despite the radicalism of early Protestantism toward many ancient Catholic “distinctives,” such as the Communion of the Saints, Penance, Purgatory, Infused Justification, the Papacy, the priesthood, sacramental marriage, etc., it may surprise many to discover that Martin Luther was rather conservative in some of his doctrinal views, such as on baptismal regeneration, the Eucharist, and particularly the Blessed Virgin Mary.

Luther indeed was quite devoted to Our Lady, and retained most of the traditional Marian doctrines which were held then and now by the Catholic Church. This is often not well-documented in Protestant biographies of Luther and histories of the 16th century, yet it is undeniably true. It seems to be a natural human tendency for latter-day followers to project back onto the founder of a movement their own prevailing viewpoints.

Since Lutheranism today does not possess a very robust Mariology, it is usually assumed that Luther himself had similar opinions. We shall see, upon consulting the primary sources (i.e., Luther’s own writings), that the historical facts are very different. We shall consider, in turn, Luther’s position on the various aspects of Marian doctrine.

Along with virtually all important Protestant Founders (e.g., Calvin, Zwingli, Cranmer), Luther accepted the traditional belief in the perpetual virginity of Mary (Jesus had no blood brothers), and her status as the Theotokos (Mother of God):

Christ…was the only Son of Mary, and the Virgin Mary bore no children besides Him… “brothers” really means “cousins” here, for Holy Writ and the Jews always call cousins brothers. (Sermons on John, chapters 1-4, 1537-39).

He, Christ, our Savior, was the real and natural fruit of Mary’s virginal womb…This was without the cooperation of a man, and she remained a virgin after that. (Ibid.)

God did not derive his divinity from Mary; but it does not follow that it is therefore wrong to say that God was born of Mary, that God is Mary’s Son, and that Mary is God’s mother…She is the true mother of God and bearer of God…Mary suckled God, rocked God to sleep, prepared broth and soup for God, etc. For God and man are one person, one Christ, one Son, one Jesus, not two Christs…just as your son is not two sons…even though he has two natures, body and soul, the body from you, the soul from God alone. (On the Councils and the Church, 1539).

Probably the most astonishing Marian belief of Luther is his acceptance of Mary’s Immaculate Conception, which wasn’t even definitively proclaimed as dogma by the Catholic Church until 1854. Concerning this question there is some dispute, over the technical aspects of medieval theories of conception and the soul, and whether or not Luther later changed his mind. Even some eminent Lutheran scholars, however, such as Arthur Carl Piepkorn (1907-73) of Concordia Seminary in St. Louis, maintain his unswerving acceptance of the doctrine. Luther’s words follow:

It is a sweet and pious belief that the infusion of Mary’s soul was effected without original sin; so that in the very infusion of her soul she was also purified from original sin and adorned with God’s gifts, receiving a pure soul infused by God; thus from the first moment she began to live she was free from all sin” (Sermon: “On the Day of the Conception of the Mother of God,” 1527).

She is full of grace, proclaimed to be entirely without sin—something exceedingly great. For God’s grace fills her with everything good and makes her devoid of all evil. (Personal {“Little”} Prayer Book, 1522).

Later references to the Immaculate Conception appear in his House sermon for Christmas (1533) and Against the Papacy of Rome (1545). In later life (he died in 1546), Luther did not believe that this doctrine should be imposed on all believers, since he felt that the Bible didn’t explicitly and formally teach it. Such a view is consistent with his notion of sola Scriptura and is similar to his opinion on the bodily Assumption of the Virgin, which he never denied—although he was highly critical of what he felt were excesses in the celebration of this Feast. In his sermon of August 15, 1522, the last time he preached on the Feast of the Assumption, he stated:

There can be no doubt that the Virgin Mary is in heaven. How it happened we do not know. And since the Holy Spirit has told us nothing about it, we can make of it no article of faith…It is enough to know that she lives in Christ.

Luther held to the idea and devotional practice of the veneration of Mary and expressed this on innumerable occasions with the most effusive language:

The veneration of Mary is inscribed in the very depths of the human heart. (Sermon, September 1, 1522).

[She is the] highest woman and the noblest gem in Christianity after Christ…She is nobility, wisdom, and holiness personified. We can never honor her enough. Still honor and praise must be given to her in such a way as to injure neither Christ nor the Scriptures. (Sermon, Christmas, 1531).

No woman is like you. You are more than Eve or Sarah, blessed above all nobility, wisdom, and sanctity. (Sermon, Feast of the Visitation, 1537).

One should honor Mary as she herself wished and as she expressed it in the Magnificat. She praised God for his deeds. How then can we praise her? The true honor of Mary is the honor of God, the praise of God’s grace…Mary is nothing for the sake of herself, but for the sake of Christ…Mary does not wish that we come to her, but through her to God. (Explanation of the Magnificat, 1521).

Luther goes even further, and gives the Blessed Virgin the exalted position of “Spiritual Mother” for Christians, much the same as in Catholic piety:

It is the consolation and the superabundant goodness of God, that man is able to exult in such a treasure. Mary is his true Mother, Christ is his brother, God is his father. (Sermon, Christmas, 1522)

Mary is the Mother of Jesus and the Mother of all of us even though it was Christ alone who reposed on her knees…If he is ours, we ought to be in his situation; there where he is, we ought also to be and all that he has ought to be ours, and his mother is also our mother. (Sermon, Christmas, 1529).

Luther did strongly condemn any devotional practices which implied that Mary was in any way equal to our Lord or that she took anything away from His sole sufficiency as our Savior. This is, and always has been, the official teaching of the Catholic Church. Unfortunately, Luther often “threw out the baby with the bath water,” when it came to criticizing erroneous emphases and opinions which were prevalent in his time—falsely equating them with Church doctrine. His attitude towards the use of the “Hail Mary” prayer (the first portion of the Rosary) is illustrative. In certain polemical utterances he appears to condemn its recitation altogether, but he is only forbidding a use of Marian devotions apart from heartfelt faith, as the following two citations make clear:

Our prayer should include the Mother of God…What the Hail Mary says is that all glory should be given to God, using these words: “Hail Mary, full of grace. The Lord is with thee; blessed art thou among women and blessed is the fruit of thy womb, Jesus Christ. Amen!” You see that these words are not concerned with prayer but purely with giving praise and honor…We can use the Hail Mary as a meditation in which we recite what grace God has given her. Second, we should add a wish that everyone may know and respect her…He who has no faith is advised to refrain from saying the Hail Mary. (Personal Prayer Book, 1522).

To summarize, it is apparent that Luther was extraordinarily devoted to the Blessed Virgin Mary, which is notable in light of his aversion to so many other “Papist” or “Romish” doctrines, as he was wont to describe them. His major departure occurs with regard to the intercession and invocation of the saints, which he denied, in accord with the earliest systematic Lutheran creed, the Augsburg Confession of 1530 (Article 21).

His views of Mary as Mother of God and as ever-Virgin were identical to those in Catholicism, and his opinions on the Immaculate Conception, Mary’s “Spiritual Motherhood” and the use of the “Hail Mary” were substantially the same. He didn’t deny the Assumption (he certainly didn’t hesitate to rail against doctrines he opposed!), and venerated Mary in a very touching fashion which, as far as it goes, is not at all contrary to Catholic piety.

Therefore, it can be stated without fear of contradiction that Luther’s Mariology is very close to that of the Catholic Church today, far more than it is to the theology of modern-day Lutheranism. To the extent that this fact is dealt with at all by Protestants, it is usually explained as a “holdover” from the early Luther’s late medieval Augustinian Catholic views (“everyone has their blind spots,” etc.). But this will not do for those who are serious about consulting Luther in order to arrive at the true “Reformation heritage” and the roots of an authentic Protestantism. For if Luther’s views here can be so easily rationalized away, how can the Protestant know whether he is trustworthy relative to his other innovative doctrines such as extrinsic justification by faith alone and sola Scriptura?

It appears, once again, that the truth about important historical figures is almost invariably more complex than the “legends” and overly-simplistic generalizations which men often at the remove of centuries—create and accept uncritically.

Dave was received into the Catholic Church in 1991 from Evangelical Protestantism. His complete conversion story can be found in Surprised by Truth.