Transubstantiation and the Eucharist 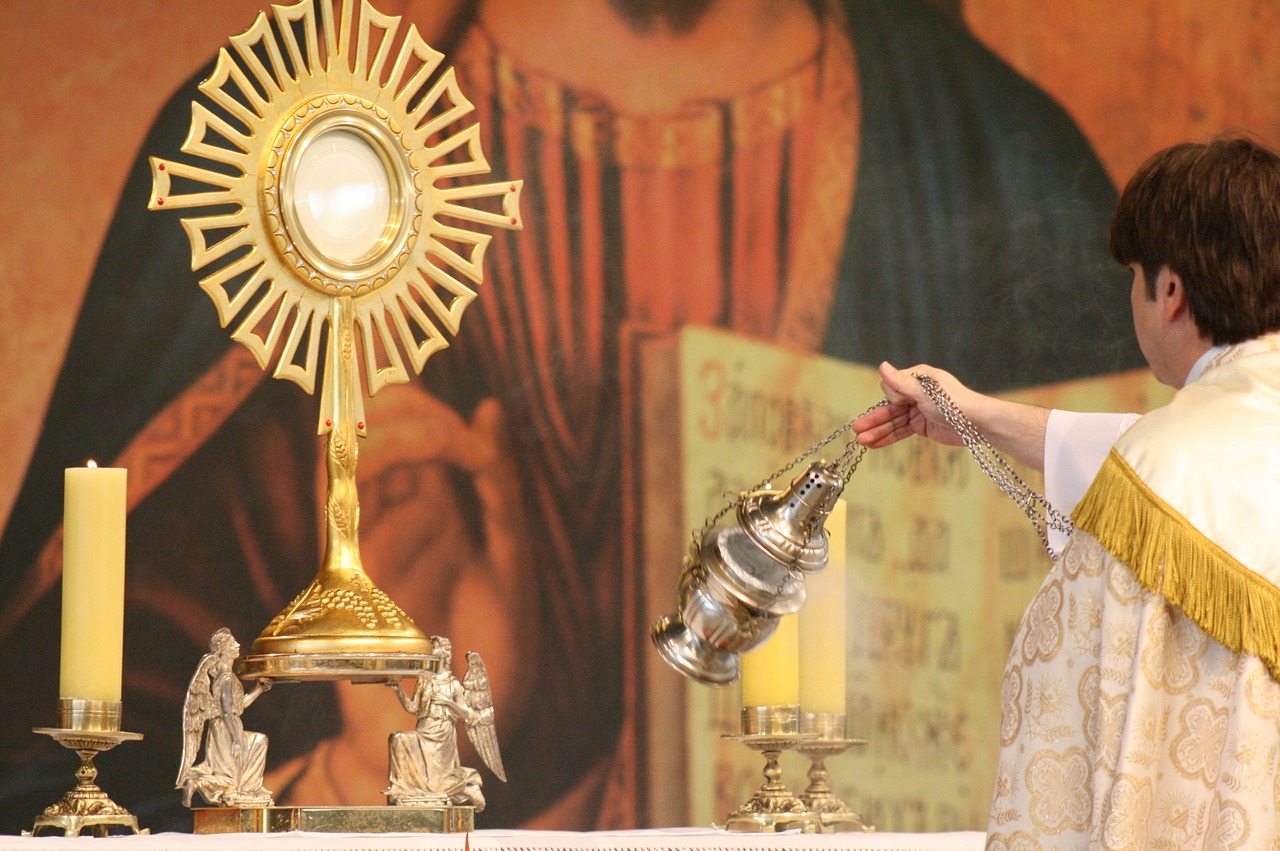 Both “transubstantiation” and “Eucharist” are big words foreign to the everyday language of everyday Americans. We may be more familiar with words like “Monosodium glutamate,” “euthanasia” or “inalienable rights,” but yet in the same sense even these terms can make us feel intellectually lethargic.

I suppose most people mentally run by and assume the meaning of these terms much like most people drive and depend on automobiles which they haven’t the foggiest idea how they actually run, let alone how to fix them. But when they do break down, or when foods with MSG start giving you headaches, it’s time to start understanding these things we’ve taken for granted.

When it comes to the Eucharist—or the Lord’s Supper as it is called by most Christian groups—and what really happens when the minister proclaims the words of consecration, there are many presumptions and misunderstandings floating around, especially when one Christian group tries to explain what another group believes. Too often, people who don’t sit well with big words pass off their own opinions as fact to unsuspecting disciples. This has been particularly true in an increasing way over the last 500 years. What Catholics believe by these two terms—transubstantiation and Eucharist—is misunderstood by not only many outside the Catholic Church but also by many within it.

On October 11, 1551, the Council of Trent, in its Decree Concerning the Most Holy Sacrament of the Eucharist (the Greek word for “thanksgiving”), defined the following propositions—which had always been the prevailing beliefs throughout Church history—as absolutely binding on all Catholics:

In the august sacrament of the holy Eucharist, after the consecration of the bread and wine, our Lord Jesus Christ, true God and man, is truly, really, and substantially contained under the species of those sensible things. (1)

Immediately after the consecration the Veritable Body of our Lord and His veritable Blood, together with His soul and divinity, are under the species of bread and wine . . . as much is contained under either species as under both. (2)

When the Catholics Church teaches that Christ is substantially and physically presence in the Eucharist, this doesn’t negate other types of Christ’s spiritual presence. Rather, this is referred to as “real” because it is a presence in the fullest possible sense of the word. (4) Therefore, the Catholic understanding of the Real Presence of the body and blood of Christ in the Eucharist must by its very nature be distinguished from God’s omnipresence, or a merely symbolic, “spiritual” presence. The great German Catholic theologian Karl Adam lucidly described the Eucharist:

So completely does Jesus disclose Himself to His disciples . . . that He gives Himself to them and enters into them as a personal source of grace. Jesus shares with His disciples His most intimate possession, the most precious thing that He Has, His own self . . . So greatly does Jesus love His Community, that He permeates it . . . with His real Self, God and Man. He enters into a real union of flesh and blood with it, and binds it to His being even as the branch is bound to the vine. (5)

The Catholic Church teaches that there are many purposes of the Eucharist, and numerous spiritual benefits which accrue from partaking in Communion at Mass—provided this is undertaken in a “worthy manner” and without conscious mortal sin. (6) It is the “source and summit of the Christian life,” (7) the sign of Christian unity, (8) and of the Body of Christ, the Church, (9) an act of Thanksgiving to God, (10) a memorial and sacrifice, (11) the central focus of the liturgy and Mass, (12) the empowering of the faithful for ministry, (13) a symbol of God’s faithfulness and miraculous provision, (14) an anticipation of the wedding feast of the Lamb in heaven, (15) a remembrance of the Last Supper, (16) and of Christ’s Passion, Resurrection, and return, (17) a sign of salvation, the “bread of heaven,” (18) adoration and worship of God, (19) union with Christ, (20) the means of grace, cleansing from sin, and spiritual renewal, (21) and an offering for the dead. (22)

The daunting word “transubstantiation” is easily understood when broken down: “trans” means “change.” Therefore, the term is defined literally as the process of change of substance. The Catholic Church, in seeking to understand the true presence of Christ in the Eucharist, a doctrine delivered directly by our Lord and St. Paul, gradually developed an explanation as to the exact nature of this miraculous and mysterious transformation.

Contrary to the common misconception, transubstantiation is not dependent upon Aristotelian philosophy, since some notion of the concept goes back to the earliest days of the Church when Aristotle’s philosophy was not known. The eastern Fathers, before the sixth century, used the Greek expression metaousiosis, or “change of being,” which is essentially the same idea. The Church did, however, draw upon prevalent philosophical categories, such as substance and accidents. In all ages, Christians have sought to defend Christianity by means of philosophy and human learning (wherever the individual intellectual categories utilized were consistent with Christian faith). St. Paul, for instance, did this in his sermon on Mars Hill in Athens, where he made reference to pagan poets and philosophers (Acts 17:22-31). St. Augustine incorporated elements of Platonic thought into his theology, and St. Thomas Aquinas synthesized Aristotle and Christianity into a unified, consistent system of Christian thought (Scholasticism or Thomism).

Transubstantiation is predicated upon the distinction between two sorts of change: accidental and substantial. Accidental change occurs when non-essential outward properties are transformed in some fashion. Thus, water can take on the properties of solidity (ice) and gas (steam), all the while remaining chemically the same. A substantial change, on the other hand, produces something else altogether. An example of this is the metabolism of food, which becomes part of our bodies as a result of chemical and biological processes initiated by digestion. In our everyday experience, a change of substance is always accompanied by a corresponding transition of accidents, or properties.

In the Eucharist—a supernatural transformation—a substantial change occurs without accidental alteration. Thus, the properties of bread and wine continue after consecration, but their essence and substance cease to exist, replaced by the substance of the true and actual Body and Blood of Christ. It is this disjunction from the natural laws of physics which causes many to stumble (see John 6:60-69). See chart below.

Indeed, transubstantiation is difficult for the natural mind (especially with its modern excessively skeptical bent) to grasp and clearly requires a great deal of faith. Yet many aspects of Christianity which conservative, evangelical, orthodox Christians have no difficulty believing transcend reason and must ultimately be accepted on faith, such as: the Incarnation (in which a helpless infant in Bethlehem is God!), the Resurrection, the omniscience of God, the paradox of grace versus free will, eternity, the Union of the Human and Divine Natures in Christ (the Hypostatic Union), the Fall of Man and original sin, and the Virgin Birth, among many other beliefs. Transubstantiation may be considered beyond reason, yet it is not opposed to reason; suprarational, but not irrational, much like Christian theology in general.

If one accepts the fact that God became Man, then it cannot consistently be deemed impossible (as many casually assume) for Him to become truly and really present under the appearances of bread and wine. Jesus, after His Resurrection, could apparently walk through walls while remaining in His physical (glorified) body (John 20:26-27). How, then, can transubstantiation reasonably be regarded as intrinsically implausible by supernaturalist Christians?

Likewise, much of the objection to this doctrine seems to arise out of a pitting of matter against spirit, or, more specifically, an a priori hostility to the idea that grace can be conveyed through matter. This is exceedingly curious, since precisely this notion is fundamental to the Incarnation of our Lord Jesus. If God did not take on matter and human flesh, no one would have been saved. Such a prejudice is neither logical (given belief in the miraculous and Christian precepts) nor scriptural, as we shall see.

John Henry Cardinal Newman, whom very few would accuse of being unreasonable or credulous, had this to say about the “difficulties” of transubstantiation:

People say that the doctrine of Transubstantiation is difficult to believe . . . It is difficult, impossible to imagine, I grant – but how is it difficult to believe? . . . For myself, I cannot indeed prove it, I cannot tell how it is; but I say, “Why should it not be? What’s to hinder it? What do I know of substance or matter? Just as much as the greatest philosophers, and that is nothing at all;” . . . And, in like manner: . . . the doctrine of the Trinity in Unity. What do I know of the Essence of the Divine Being? In know that my abstract idea of three is simply incompatible with my idea of one; but when I come to question the concrete fact, I have no means of proving that there is not a sense in which one and three can equally be predicated of the Inommunicable God. (23)

Once one realizes that transubstantiation is a miracle of God, any notion of impossibility vanishes, since God is omnipotent (all-powerful) and the sovereign Lord over all creation (Matthew 19:26, Philippians 3:20-21, Hebrews 1:3). If mere men can change accidental properties without changing substance (for example, turning iron into molten liquid or even vapor), then God is certainly able to change substance without outward transmutation.

Therefore, after these weak philosophical objections are disposed of, we can proceed to objectively and fairly examine the clear and indisputable biblical data which reveals to us that God does in fact perform (through the agency of priests) the supernatural act of transubstantiation.

2. Chapter 3: On the Excellency of the Most Holy Eucharist Over the Rest of the Sacraments. See also: CCC, #1377, 1390. This belief is derived largely from 1 Corinthian 11:27: “Whoever, therefore, eats the bread or drinks the cup of the Lord in an unworthy manner will be guilty of profaning the body and blood of the Lord.” Most NT translations include the crucial word or (e.g., NIV, NASB, NEB, NKJV, Phillips). The KJV is a notable exception, but many Protestant scholars admit that its and was a non-literal, polemical mistranslation.