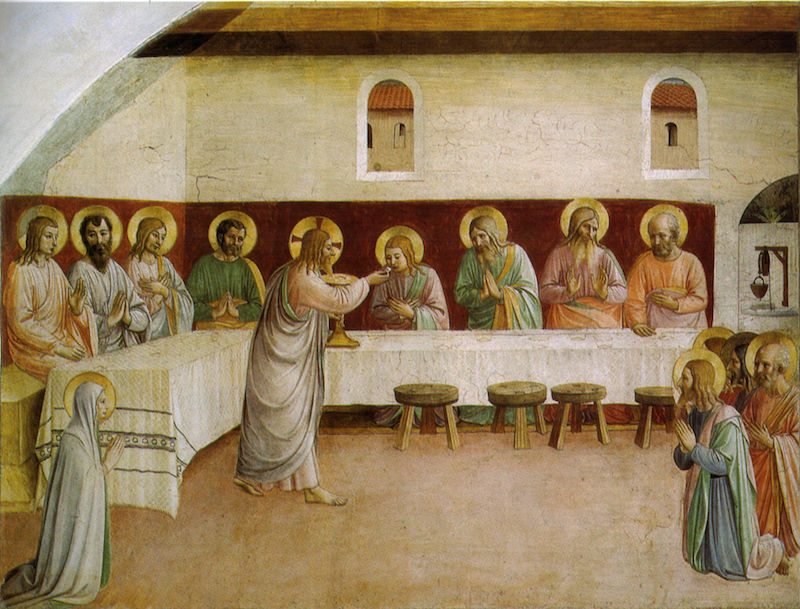 I was not raised as a Catholic. In fact, the Christian tradition in which I grew up is, in many ways, at the opposite end of the theological spectrum from Catholicism. We had no liturgy and no sacraments. For us the Eucharist (or Lord’s Supper as we called it) was purely symbolic. We were adamant that the bread and wine remained bread and wine at the Supper. And this was taught consciously in juxtaposition to the Catholic Church’s teaching that the bread and wine become the Body and Blood of our Lord Jesus Christ. It’s fair to say, by virtue of this contrast to the Catholic Church’s doctrine of the Real Presence, that I was taught to believe a doctrine of Real Absence.

I’m a committed Catholic now, and the doctrine of the Eucharist played a significant role in identifying the Catholic Church as the Church that Jesus Christ established. A central question that drove me some years ago to reconsider the theology that I had been taught as an evangelical Protestant was, “What is orthodoxy?” Different groups of Christians hold mutually contradictory views on many doctrines, including the Eucharist; it’s clear that they can’t all be right. I was concerned about this disunity and confusion in Bible interpretation. So I began to search for some other means, besides my own all-too-fallible opinions, to determine what was orthodox. In the course of my reading I was exposed to the Catholic Church’s claim to be the Church established by Jesus Christ. I had to find out whether this claim was true.

When I was challenged by the Catholic view of the Eucharist my first stop was the Scriptures. My instincts as an evangelical Protestant were immediately to check everything against the Bible. So I began to seriously study the central passages that pertain to the Eucharist. I was moved most by my study of John 6:35-69.

Exactly one year before the Last Supper, on the eve of the Passover, Jesus delivered these stunning words to His followers:

Some Christians try to blunt the force of these words. They contend that when Jesus said “eat My flesh” and “drink My blood” he was using a metaphor for faith; eating flesh and drinking blood means putting our faith in Jesus. But I learned that “eating flesh” and “drinking blood” already had an established metaphorical meaning for the ancient Jews. In the Old Testament it meant “to revile” or “to slander” (see Psa 27:2; Zech 11:9), not “to believe.” Its symbolic meaning was that of brutal slaughter (Jer 46:10; Ezek 39:17). In ancient Jewish tradition the “eater of flesh” was the Devil himself, “the slanderer and adversary par excellence”1 . So if Jesus’ words were to have a figurative meaning He would be saying that they must revile and slander Him in order to have eternal life. For His audience to understand these words as referring to faith is highly problematic.

Nor can the command to “eat” the Lord’s flesh be taken metaphorically. St. John does not only use the normal Greek word for “eat,” phagomai, but in verses 54, 56 and 57 uses the word trogo, a very vivid word meaning “to munch, gnaw.” My research revealed that while phagomai is sometimes used metaphorically, trogo is never anything but literal in the Greek Bible and all other Greek literature.

In John 6:50-58 Jesus says six times that His hearers must eat His flesh and drink His blood. It is clear that His audience understood Him literally; they were scandalized by these words. But the Lord made no move to correct their understanding; rather, He simply reiterated His teaching more strongly. Elsewhere, when the disciples or others wrongly took Him literally, He explained His figurative meaning to them (see, for instance, John 3:1-15 and Matt 16:5-12). In another Gospel passage, we are told that Jesus always explained the true meaning of His hard teachings at least to His own disciples (Mark 4:34). But in this case, He challenged even the Twelve that they could leave if they could not accept this teaching (verse 67).

When I had finished my study of John 6, I was rather startled at (and nervous about) the strength of the Catholic position. And it became clear that the other passages of Scripture that deal with the Eucharist present a united picture. For instance, Jesus draws a parallel between the manna in the wilderness and His flesh that He will give us to eat (John 6:49-50). St. Paul makes the same parallel (1 Cor 10:3ff.). Jesus says, “This is My Body . . . This is My Blood” at the Last Supper (Matt 26:26-29; Mark 14:22-25; Luke 22:14-21). St. Paul says that we partake of One Loaf (1 Cor 10:17), not many loaves as is the case in those Christian groups in which they teach that the bread remains bread. And he says that the one who eats unworthily is “guilty of the body and blood of Christ” (1 Cor 11:27).

I was now convinced from Scripture that the Catholic view was correct, but my “fate” was sealed when I began to study the views of the earliest Christians on the Eucharist.

Ironically, most helpful for me was the research of the eminent Protestant scholar J. N. D. Kelly in his Early Christian Doctrines2 . Kelly shows, through citation of the original writings, that Christians believed consistently—from the time of the Apostles onward—in the real presence of the Body and Blood of Christ in the Eucharist and in the Eucharist as the New Covenant sacrifice.

For instance, St. Ignatius of Antioch, a disciple of the Apostle John, writes around A.D. 106 that “the Eucharist is the flesh of our Saviour Jesus Christ, which suffered for our sins and which the Father in His goodness raised” (Epistle to the Smyrneans 6:2). Kelly observes that, “Clearly he intends this realism to be taken strictly, for he makes it the basis of his argument against the Docetists’ denial of the reality of Christ’s body” (Doctrines, 197). St. Ignatius’ argument would not have been persuasive to his opponents unless belief in the Eucharist as truly the Body and Blood of Christ was pervasive (even among heretical groups!) by A.D. 106.

Justin Martyr writes around A.D. 130 that,

We do not receive these as common bread or common drink. But just as our Saviour Jesus Christ was made flesh through the Word of God and had both flesh and blood for our salvation, so also we have been taught that the food which has been eucharistized by the word of prayer from Him . . . is the flesh and blood of the incarnate Jesus (First Apology, 66:2).

He took that created thing, bread, and gave thanks and said, ‘This is My body.’ And the cup likewise, which is part of that creation to which we belong, He confessed to be His blood, and taught the new oblation of the new covenant; which the Church receiving from the apostles, offers to God throughout all the world. . . . Then again, how can they [Gnostic heretics] say that the flesh, which is nourished with the body of the Lord and with His blood, goes to corruption and does not partake of life? . . . When, therefore, the mingled cup and the manufactured bread receives the Word of God, and the Eucharist of the blood and the body of Christ is made, from which things the substance of our flesh is increased and supported, how can [the Gnostics] affirm that the flesh is incapable of receiving the gift of God, which is life eternal, which [flesh] is nourished from the body and blood of the Lord, and is a member of Him? (Against Heresies, 4:17:5, 4:18:4-5, 5:2:3)

Note that here St. Irenaeus supports both the Catholic view of the real presence and the Eucharistic sacrifice in the same context. And so it is with all the Church Fathers: Tertullian, Hippolytus, Clement of Alexandria, Origen, Athanasius, Augustine, Cyril of Jerusalem. I read them and found they all believed in the Real Presence and the Eucharist as the New Covenant sacrifice.

Intellectually I was beaten. It was clear that the Catholic teaching on the Eucharist was both biblically correct and the continuous belief of the Church. It was, in a word, orthodox.

But did I believe it? How does one move over that hump from intellectual affirmation to heart-felt belief? I wrestled with this question for several weeks. Finally one night, after saying some evening prayers, I reviewed my faith as an Evangelical Christian. “I believe,” I said to myself, “in the Incarnation of Jesus Christ, the second Person of the Trinity. I believe that He created all things in the universe. And I believe in His bodily resurrection from the dead. What is my problem with His Real Presence in the Eucharist?” And suddenly I realized that I had no problem. I believed.

It was all uphill from there. Only two Christian groups have believed consistently in the true presence of the Body and Blood of Christ in the Eucharist through all of Church history: the Catholic Church and the Eastern Orthodox. Other considerations—notably the papacy and unity—steered me away from Eastern Orthodoxy and to the Catholic Church. And as my wife and I plowed through the myriad of other issues that imposed themselves between us and union with the Catholic Church—contraception, purgatory, confession to a priest, indulgences, Mary—we kept coming back to the touchstone of the Real Presence. There was no place else to get the Body and Blood of our Lord. Where else could we go?

I have continued to pursue my academic studies of the Eucharist and am ever more fully convinced that the Catholic Church’s teaching is the teaching passed on by Jesus Christ to His apostles. It is eminently defensible. But it has also become deeply personal, a central facet of my Christian life. Union with our Lord in the Holy Eucharist brings me peace and joy beyond anything I have had in my life before.

And I have experienced His Presence in powerful ways. One evening after meeting with my spiritual director I went to pray in a small chapel where the Blessed Sacrament was reserved. All alone, I prostrated myself before the Lord and praised Him for His goodness and grace. His Presence filled the room; I was bathed in His love and a tremendous calm, joy, and love for my Savior filled my soul. I knelt there crying quietly for many minutes; I literally never wanted to leave that room. It was for me a small foretaste of heaven, the tremendous embrace of infinite Love that waits for us all after this life. That is what the Eucharist brings to us; the precious gift of the Lord’s own Presence. And this is according to His promise: “And remember, I am with you always, to the end of the age” (Matt 28:20).