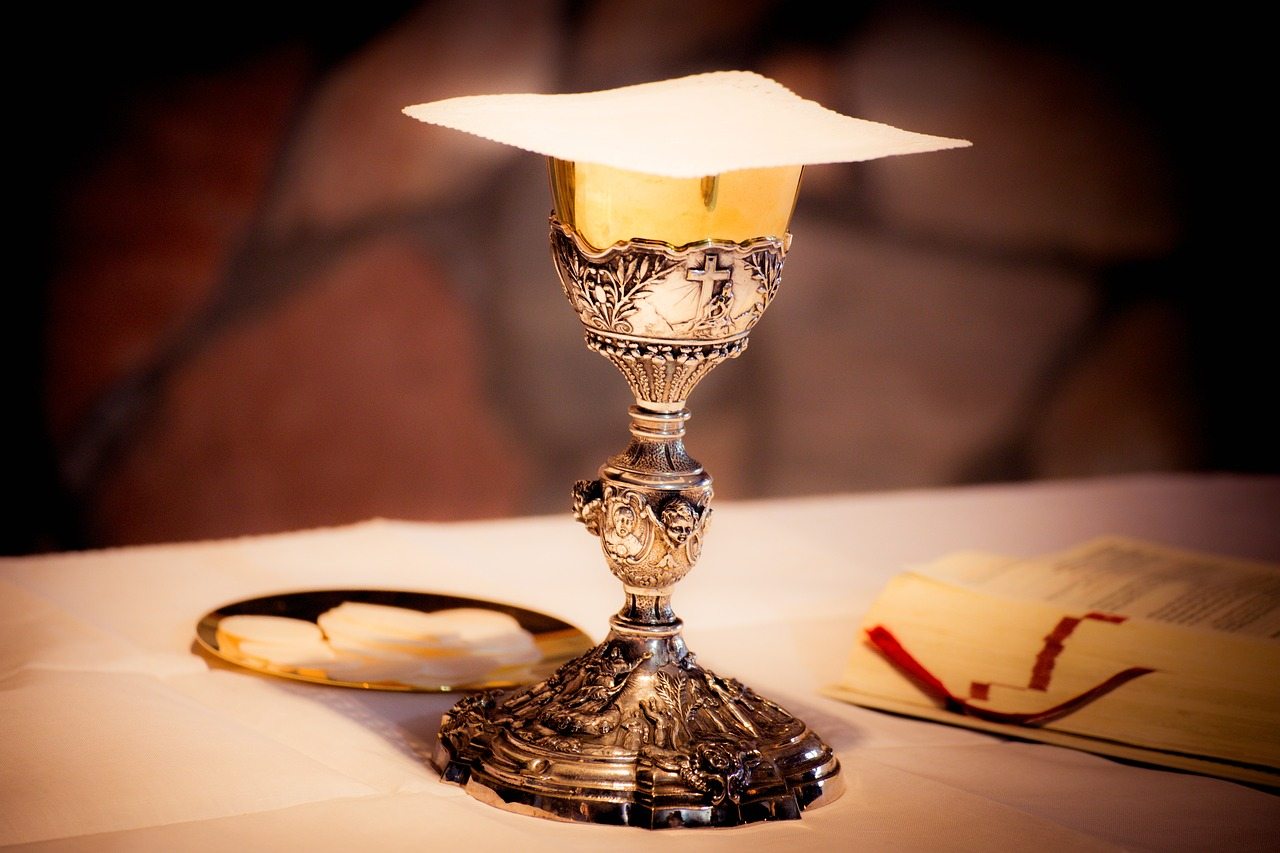 One of the great theological champions quoted by both Protestants and Catholics to bolster their perspective positions on the meaning of many theological issues is St. Augustine, Bishop of Hippo. He is best known for two of his writings, his “Confessions” and “The City of God,” and also for his devastating defense against the Pelagian heresy.

Because of this universal popularity, it is important to hear his personal testimony about the Real Presence* of the Body and Blood of Jesus Christ in the Eucharistic bread and wine.

This great Church Father made many statements which have been traditionally seized upon by Protestant theologians as evidence of his adoption of either a purely symbolic or Calvinistic notion of the Lord’s Supper. Ludwig Ott, in his book Fundamentals of Catholic Dogma, commented on this use:

The Eucharistic doctrine expounded by St. Augustine is interpreted in a purely spiritual way by most Protestant writers on the history of dogmas. Despite his insistence on the symbolical explanation he does not exclude the Real Presence. In association with the words of institution he concurs with the older Church tradition in expressing belief in the Real Presence . . .

When in the Fathers’ writings, esp. those of St. Augustine, side by side with the clear attestations of the Real Presence, many obscure symbolically-sounding utterances are found also, the following points must be noted for the proper understanding of such passages: (1) The Early Fathers were bound by the discipline of the secret, which referred above all to the Eucharist (cf. Origen, In Lev. hom. 9, 10); (2) The absence of any heretical counter-proposition often resulted in a certain carelessness of expression, to which must be added the lack of a developed terminology to distinguish the sacramental mode of existence of Christ’s body from its natural mode of existence once on earth; (3) The Fathers were concerned to resist a grossly sensual conception of the Eucharistic Banquet and to stress the necessity of the spiritual reception in Faith and in Charity (in contradistinction to the external, merely sacramental reception); passages often refer to the symbolical character of the Eucharist as ‘the sign of unity’ (St. Augustine); this in no wise excludes the Real Presence. pp.377-8:

During my own journey to the Catholic Church, I was voraciously studying people like Dollinger, Salmon and Kung, in order to refute Catholic claims to infallibility. I remember my own use of this approach. I claimed that St. Augustine adopted a symbolic view of the Eucharist. I based this on his oft-stated notion of the sacrament as symbol or sign. But I failed to realize, however, that I was arbitrarily creating a false, logically unnecessary dichotomy between the sign and the reality of the Eucharist, for St. Augustine. When all of his remarks on the subject are taken into account, it is very difficult to argue that he didn’t accept the Catholic understanding of the Real Presence of Christ in the Eucharist. For Augustine, the Eucharist, objectively speaking, is both sign and reality. There simply is no contradiction.

A cursory glance at Scripture confirms this general principle. For instance, Jesus refers to the sign of Jonah, comparing the prophet Jonah’s three days and nights in the belly of the fish to His own burial in the earth (Mt 12:38-40). In this case, both events, although described as signs, were quite real indeed. Jesus also uses the terminology of sign in connection with His Second Coming (Mt 24:30-31), which is believed by all Christians to be a literal event, and not symbolic only.

Given this introduction, consider now the following statements made by St. Augustine which strongly support the opinion that He held to the true presence of the Body and Blood of Christ in the Eucharist:

[Referring to the sacrifice of Melchizedek (Gen 14:18 ff.)] The sacrifice appeared for the first time there which is now offered to God by Christians throughout the whole world. {City of God, 16, 22; on p.403}

Christ is both the priest, offering Himself, and Himself the Victim. He willed that the sacramental sign of this should be the daily sacrifice of the Church. {Ibid, 10, 20; on p.99}

Not only is no one forbidden to take as food the Blood of this Sacrifice, rather, all who wish to possess life are exhorted to drink thereof. {Questions of the Hepateuch, 3, 57; on p.134}

The Sacrifice of our times is the Body and Blood of the Priest Himself . . . Recognize then in the Bread what hung upon the tree; in the chalice what flowed from His side. {Sermo iii. 1-2; on p.62}

Eat Christ, then; though eaten He yet lives, for when slain He rose from the dead. Nor do we divide Him into parts when we eat Him: though indeed this is done in the Sacrament, as the faithful well know when they eat the Flesh of Christ, for each receives his part, hence are those parts called graces. Yet though thus eaten in parts He remains whole and entire; eaten in parts in the Sacrament, He remains whole and entire in Heaven. {Mai 129, 1; cf. Sermon 131; on p.65}

The entire Church observes the tradition delivered to us by the Fathers, namely, that for those who have died in the fellowship of the Body and Blood of Christ, prayer should be offered when they are commemorated at the actual Sacrifice in its proper place, and that we should call to mind that for them, too, that Sacrifice is offered. {Sermo, 172, 2; 173, 1; De Cura pro mortuis, 6; De Anima et ejus Origine, 2, 21; on p.69}

It was the will of the Holy Spirit that out of reverence for such a Sacrament the Body of the Lord should enter the mouth of a Christian previous to any other food. {Ep. 54, 8; on p.71}

I find it difficult to conceive of anyone denying that St. Augustine believed that Christ is truly present in the Eucharistic Bread and Wine, or in the Sacrifice of the Mass for that matter, after perusing all of this compelling evidence. His other symbolic utterances are easily able to be synthesized with his “realistic” language, because realism can co-exist with symbol while retaining its realism, as I illustrated from the undeniable biblical examples of the “sign of Jonah” and the “sign of the coming of the Son of man.”  The symbolic language can also (and indeed often does in Augustine) refer to other, more communal aspects of the Eucharist which complement (but are not contrary to) the “Real Presence” aspect of it.

The simple fact of the matter is that Augustine spoke in both ways. But we can harmonize them as complementary, not contradictory, because Catholics, like Augustine himself, tend to think in terms of “both/and” rather than the dichotomous “either/or” prevalent in Protestantism.

The communal (“symbolic” if you will) aspects of the Sacrifice of the Mass, to which Augustine referred, are totally consonant with Catholic theology, and are discussed, e.g., in the following passages from the new Catechism of the Catholic Church (Liguori, MO: Liguori Publications, 1994):

The Eucharist, the sacrament of our salvation accomplished by Christ on the cross, is also a sacrifice of praise in thanksgiving for the work of creation. In the Eucharistic sacrifice the whole of creation loved by God is presented to the Father through the death and the resurrection of Christ. Through Christ the Church can offer the sacrifice of praise in thanksgiving for all that God has made good, beautiful, and just in creation and in humanity. (#1359, pp.342-3)

The Eucharist is a sacrifice of thanksgiving to the Father, a blessing by which the Church expresses her gratitude to God for all his benefits, for all that he has accomplished through creation, redemption, and sanctification. Eucharist means first of all ‘thanksgiving.’ (#1360, p.343)

St. Augustine admirably summed up this doctrine that moves us to an ever more complete participation in our Redeemer’s sacrifice which we celebrate in the Eucharist:

This wholly redeemed city, the assembly and society of the saints, is offered to God as a universal sacrifice by the high priest who in the form of a slave went so far as to offer himself for us in his Passion, to make us the Body of so great a head . . . Such is the sacrifice of Christians: “we who are many are one Body in Christ.” The Church continues to reproduce this sacrifice in the sacrament of the altar so well-known to believers wherein it is evident to them that in what she offers she herself is offered. {City of God, 10,6: PL 41, 283; cf. Rom 12:5} (#1372, p.346)

The Eucharist contains and expresses all forms of prayer: it is ‘the pure offering’ of the whole Body of Christ to the glory of God’s name [Note: cf. Mal 1:11] and, according to the traditions of East and West, it is the ‘sacrifice of praise.’ {emphasis in original} (#2643, p.636)

Obviously, then, since this aspect of the Eucharist is presented openly and repeatedly in the Catechism (even quoting St. Augustine), it can not be seen to be at all contradictory to the Catholic view of the “Real Presence” essence of the Eucharist.

Therefore, I encourage you to ponder carefully the words of this faithful witness—St. Augustine—to whom both Protestants and Catholics look as a Father in the Faith.